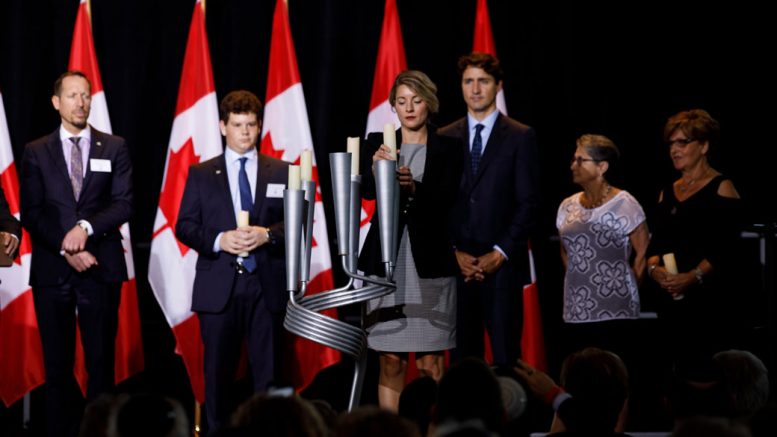 The National Holocaust Monument – a stark, stylized Star of David in form – took a decade to complete at a cost of $7.2 million split between private and public donors.

“May this monument remind us to always open our arms and our hearts to those in need,” Prime Minister Justin Trudeau said Wednesday at the opening.

The unveiling of the memorial, which is located in Ottawa across from the Canadian War Museum, is being seen as historic. Until now, Canada has been the sole Allied nation not to have a national Holocaust memorial.

“This monument, so close to our Parliament and Supreme Court, is a reminder of the devastating cost of allowing hatred and tyranny to overcome openness, inclusion, and freedom,” stated Prime Minister Trudeau. “Today we reaffirm our unshakeable commitment to fight anti-Semitism, racism, xenophobia, and discrimination in all its forms, and we pay tribute to those who experienced the worst of humanity. We can honour them by fighting hatred with love, and seeking always to see ourselves in each other.”

Rabbi Daniel Friedman, the grandson of Holocaust survivors and the Rabbi of the Edmonton Beth Israel Synagogue, chaired the National Holocaust Monument Development Council, which raised $4.5 million for the design and construction of the monument.

He said, “Today is an extraordinary day in our nation’s history. But, at the same time, today is a bittersweet day.  The truth is, we’d all much rather not be here today.  We’re here because the Nazis – may their name be erased – slaughtered our parents, grandparents, siblings, and children.  Bricks and mortar can never replace our murdered loved ones.  And so we gather today, proud of the most incredible Holocaust monument in the world; but devastated at the memory of what has brought us to this point.”

The drive to build a national Holocaust monument was spearheaded in 2007 by Laura Grosman, then an 18-year-old public administration student at the University of Ottawa. She was appalled by Canada’s lack of recognition for Holocaust victims, and lobbied federal politicians to enact legislation to build one.

A private member’s bill launched by then Conservative MP Tim Uppal, a Sikh from Edmonton, became law in March 2011.

In May 2014, a selection jury awarded design of the monument to a team, led by Lord Cultural Resources of Toronto, that included architect Daniel Libeskind, landscape architect Claude Cormier, photographer Edward Burtynsky and University of Toronto historian Doris Bergen. Their winning design was titled Landscape of Loss, Memory and Survival. It features six triangular concrete structures that create the points of a star, along with Burtynsky’s large, monochromatic photos of Holocaust sites.

In Ottawa for the opening event, Rabbi Friedman addressed the crowd saying, “Today we celebrate the commitment to our belief that every human being was created in the image of G-d, we are all His children, all equal and beloved in His eyes.   And when evil does arise, we as Canadians will be the first to the frontlines to root out hatred and prejudice.

“Less than a century after the Holocaust, we see anti-Semitism together with racism of all types rearing its ugly head…This monument commemorates an event in history – the murder by the Nazis of six million Jews as well as hundreds of thousands of others, including Jehovah’s witnesses, Roma, LGBTQ individuals, the disabled, and those who stood up to Hitler and the Germans.  But going forward its mission is much wider in scope.  The mission of the monument is to take that horror and be an everlasting reminder that evil exists in the world and that we as Canadians are committed to protecting every human being from the monsters that walk amongst us.

“This monument is our newest Canadian icon.  When we think of ourselves, and the nations of the world think of us, going forward it will not just be about hockey and maple syrup, it will be about the position we have chosen for ourselves at the helm of fighting human rights abuses everywhere.

“How do we achieve that?  By placing a visit to the National Holocaust Monument on the schedule not just of every schoolchild in this great country, but on the itinerary of every visiting international head-of-state and foreign dignitary.  This monument will showcase to the world who we are and what we stand for.”

The Centre for Israel and Jewish Affairs and Canadian Jewish Holocaust Survivors and Descendants welcomed the opening of the national memorial in a joint statement, saying, “We express deep appreciation to all who played a role in making this monument a reality.

“May it always serve as a caution of the dangers of unchecked evil and the unspeakable cost of silence in the face of anti-Semitism and hatred.”

“This monument is a powerful tribute to the millions of Jewish men, women and children and other victims whose lives were extinguished during one of the darkest chapters in human history,” stated Mélanie Joly, Minister of Canadian Heritage. “As we reflect and honour their memory, we also pay tribute to the courage and strength of the survivors who came to Canada following the Holocaust. Their stories are a powerful reminder of our responsibility to stand against anti-Semitism and prejudice in all its forms and to never allow intolerance and hate to take root in our communities. We will never forget.”

Ram Romanovsky, a past president of Edmonton’s Beth Israel Congregation was in Ottawa for the opening and expressed great appreciation for the hard-working council, government officials and especially a Yasher Koach to our own Rabbi Daniel Friedman for taking a leadership role with this important National project.

“We have much to be thankful for,” said Romanovsky, “and we are proud to have Rabbi Friedman as our spiritual leader here in Edmonton.”