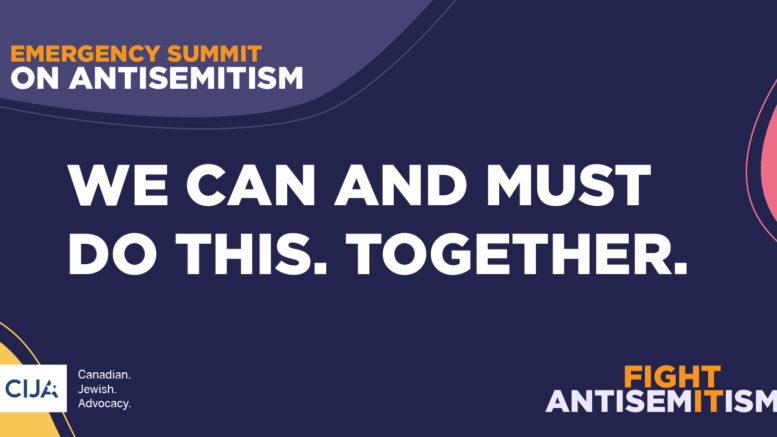 (AJNews) – The Government of Canada has committed to taking immediate steps to combat antisemitism and all forms of racism and discrimination.

In recent months, there has been a disturbing increase of community-reported hate crimes targeting Jewish communities, neighbourhoods, and synagogues. On July 21, Irwin Cotler, Canada’s Special Envoy for Preserving Holocaust Remembrance and Combatting Antisemitism, and Bardish Chagger, Minister of Diversity and Inclusion and Youth, convened a National Summit on Antisemitism to identify ways in which organizations, communities, individuals, and the federal government can work together to increase public awareness, enhance community security, combat misinformation and online hate, and identify new measures necessary to combat antisemitism.

“Jewish communities across Canada are threatened and targeted in their neighborhoods, in the streets, on campuses, and in their communities,” stated Special Envoy Cotler. “We have seen torched synagogues, memorials defaced, institutions vandalized, and cemeteries desecrated. Historically, and still today, Jewish people remain one of the most targeted minorities with respect to hate crimes—globally and in Canada. This is further provoked by the incendiary antisemitic hate we see on social media platforms, which incentivize offline violence. This national summit is not a one-time conversation, but an ongoing commitment to the combatting of the scourge of antisemitism which affects us all.”

“Antisemitism has no place in Canada—or anywhere else,” stated Prime Minister Trudeau. “It is unacceptable that Jewish communities and people still face violence, hate, and discrimination in our country. Today, we reaffirm our commitment to continue to take concrete action to combat antisemitism in all its forms. Only together can we build a Canada where we celebrate diversity, compassion, and inclusion as our strengths.”

The summit provided the opportunity for ministers, policymakers, and program administrators to listen to the concerns of community leaders, better understand the pervasiveness of antisemitism in Canada, and identify concrete steps the government can take to address the issues facing Jewish communities.

Discussions also focussed on how the federal government should work with Jewish communities to implement or improve existing programs, as well as develop new proactive and responsive initiatives that address antisemitism and hate.

Following the summit, the Government of Canada committed to the following initial actions:

“Anti-Jewish hatred is a growing and constantly mutating scourge that must be combatted with determination by all Canadians,” stated President and CEO of the Centre for Israel and Jewish Affairs Shimon Koffler Fogel. “We are pleased that the Government of Canada has demonstrated leadership and has organized this National Summit on Antisemitism. We will continue to work with our elected officials on advancing the concrete and constructive policy proposals we are presenting related to community security, education, and combating Holocaust denial. While today’s summit focused on antisemitism and Jewish lived experience, the lessons learned and measures that will be implemented as a result will be instructive and of value to all at-risk minorities. All Canadians—Jewish and non-Jewish alike—have a role to play in creating the Canada we aspire to live in, one free from hate, racism, and bigotry.”

“This was an important step in addressing the disease of antisemitism attacking our society,” said Michael Mostyn, Chief Executive Officer of B’nai Brith Canada, who spoke at the virtual event. “It is especially important that the summit is seen as the starting point of a process, that there must be mechanism for follow-up and consideration of further action.”

Additionally, earlier today, Bill Blair, Minister of Public Safety and Emergency Preparedness, and Mary Ng, Minister of International Trade and Minister of Small Business and Export Promotion, announced funding for 150 projects representing over $6 million to support communities at risk of hate-motivated crime through the Communities at Risk: Security Infrastructure Program (SIP). The announcement was delivered from Chabad Lubavitch in Markham, Ontario, which is among the 150 projects recommended for development.

“Racism and hate, including antisemitism, have no place in Canada,” concluded Minister Chagger. “Nothing can justify the spread of hate online or in any form. While the Government of Canada continues to stand against all forms of hate, systemic racism, and intolerance, we know that Canada is not immune to hate-motivated violence and antisemitism. I would like to extend my gratitude to the Jewish organizations and individuals who shared their intersectional lived experiences, and their recommendations on how the government can further identify and combat antisemitism, build upon and improve existing programs, and empower and enable the diverse Jewish communities in Canada. Today’s summit was another important and productive step to building a consciously more inclusive society.”