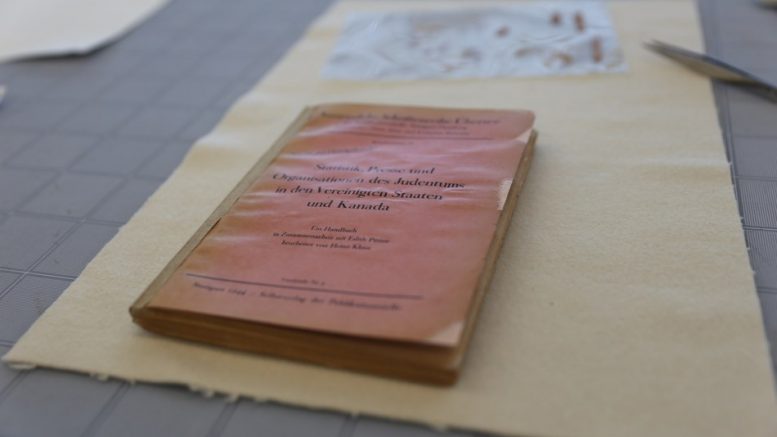 (January 23, 2019) – Library and Archives Canada has announced the recent acquisition of a rare 1944 book previously owned by Adolf Hitler.

The data contained within the book provides details on population statistics in certain cities as well as key organizations and presses of Canadian and American Jewish communities.

This work hints at the story of what might have happened in Canada had the allies lost World War II. It also demonstrates that the Holocaust was not a purely European event, but rather an operation that was stopped before it reached North America. The book adds a great deal of insights worthy of reflection for Canada about World War II, and curators at LAC believe it is an important tool to fight Holocaust denial.

The book lists general population figures, as well as the number of Jews, in dozens of Canadian cities large and small, from Vancouver to Glace Bay, N.S. It also details ethnic backgrounds and the languages people spoke.

“This information would have been the building blocks to rolling out the Final Solution in Canada,” said Michael Kent, a curator at Library and Archives Canada.

Given the horrors that transpired in Europe, targets would also likely have included any racial minority, gays and lesbians, Indigenous Peoples and others considered problematic in Nazi eyes, Kent told a news conference on Wednesday January 23.

The acquisition of this book highlights the mandate of Library and Archives Canada to acquire material that reflects the published record of Canada as well as to preserve the memory of the Holocaust. It is also a way to let us reflect on what would have happened in Canada had the Second World War ended differently, noted Kent.

While the book is “certainly a creepy item,” the decision to buy it was a simple one, Kent said. Preserving the memory of the Holocaust was more of a concern than “the possibility that someone might think we’re glorifying Hitler through this acquisition.”

“It is fundamental for a national institution like Library and Archives Canada—and other memory institutions around the world—to acquire, preserve and make available documents no matter how controversial or contentious they could be,” stated Guy Berthiaume, Librarian and Archivist of Canada.

“It allows us to educate and to advocate for the most complete historical record possible. The truth of history is woven from many sources, and it is only when history is presented in its entirety that it can support the free exchange of ideas that lies at the heart of a democratic society.”

“This invaluable report offers a documented confirmation of the fears felt so acutely and expressed by so many Canadian Jews during the Second World War: that the Nazis would land on our shores and with them, the annihilation of Jewish life here,” remarked Rebecca Margolis, Professor, Department of Modern Languages and Literatures and Vered Jewish Canadian Studies Program, University of Ottawa, and President, Association for Canadian Jewish Studies.

“While these fears may seem unfounded given the geographic distance of Nazi Europe to Canada, this handbook offering detailed statistics of Jewish populations across North America underlines their nightmarish potential.”

The book is written in German, though many names are in English.The author of this book, Heinz Kloss, was a noted German linguist whose specializations included German speakers living in the United States.

This book was likely brought to the United States as a war souvenir, as thousands were taken by American soldiers from the Nazi leader’s alpine retreat outside Berchtesgaden in the spring of 1945. An American soldier likely plucked the volume from Hitler’s library at his alpine retreat near Berchtesgaden, as thousands of books were taken as war souvenirs in 1945, Library and Archives says.

The Canadian institution bought the book for about $6,000 from a reputable dealer who obtained it as part of a collection owned by a Holocaust survivor, Kent said. The dealer, who trades exclusively in Judaica, was keen to see the volume go to a Jewish institution or another appropriate memory institution.. Other libraries in North America with books once owned by Hitler include the Library of Congress and Brown University Library.

The book will be preserved in the Jacob M. Lowy Collection where other important items related to Holocaust remembrance reside.

Library and Archives Canada hopes that this book becomes a tool for Holocaust remembrance and for fighting Holocaust denial. A recent American study suggested that two-thirds of American millennials could not identify what Auschwitz was and that 22% of American millennials have not heard of the Holocaust or were not sure if they had heard of it. These statistics reaffirm the importance of preserving the memory of the Holocaust.

Be the first to comment on "Canada’s Archives buys ‘creepy’ book that hints about Hitler’s plans for N. America"