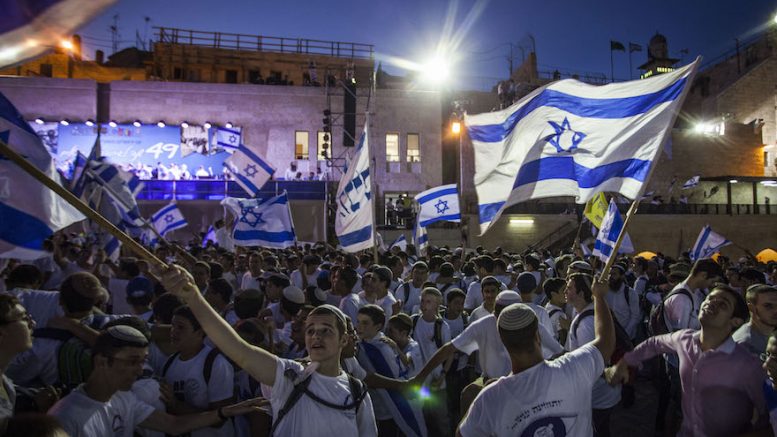 Jewish boys waving Israeli flags near the Western Wall in the Old City of Jerusalem as part of celebrations for Jerusalem Day, June 5, 2016. (Zack Wajsgras/Flash90)

HOLLYWOOD, Fla. (JTA) — Normally, to quote the famous song, “I love a parade.”

Except when I don’t.

This weekend was the celebration of the 49th anniversary of the reunification of Jerusalem during the Six-Day War. The anniversary was accompanied by gleeful — one might even say ecstatic — observances throughout the capital of the Jewish world.

I celebrated as well, in my own way: I discussed the reunification in my Shabbat sermon and offered a prayer for the peace of Jerusalem.

In less than a month, I am about to visit Jerusalem for the 45th time. My visits have been for as long as a year or, during emergency missions at times of crisis, just three days.

Jerusalem is the place where my soul, as well as the soul of the Jewish people, actually lives. It is my spiritual home page. It is the place where I feel most at peace, as well as where I feel most engaged and even enraged. There are times in Jerusalem when I find the air too thick with discussion and argument, and I must flee the burdens of Jewish history and visit, say, Tel Aviv.

In celebrating the reunification of Jerusalem, Jewish ultranationalists marched through the city’s Muslim Quarter waving Israeli flags and otherwise bringing their jubilation to a place where, to say the least, it may not have been the most welcome.

When it comes to Israel, I am not a leftist. If anything, I am a centrist, which means that my politics can be a bit wishy-washy, at least for some, or at least boring and temperate.

This is about Judaism.

Or, even more sharply, this is about being human.

As I read the reports of the parades through the Muslim Quarter of Jerusalem’s Old City, I find myself asking the following question: What Jewish value are we celebrating here?

I am not asking: “What moment in modern Jewish and Israeli history are we celebrating?”

I am asking a deeper question, about how one behaves in victory and treats the vanquished.

Like it or not, the Arab residents of Jerusalem “lost.”

Yes, of course, many, if not most of them, would likely prefer to live under Israeli sovereignty than under the authority of any imagined future Palestinian state. And, yes, their municipal services are better than they might have ever imagined.

And, yes, Jordan abused Jewish holy sites, including uprooting gravestones from the Mount of Olives to make room for the InterContinental Hotel on its sacred slopes.

And, yes, the Jewish Quarter had been decimated in the 1948 war, its residents forced to flee.

And, yes, together we should sing “Jerusalem of Gold,” the Naomi Shemer song that became the anthem of Israel’s lightning victory in 1967.

But can we accept these truths and at the same time acknowledge and imagine the psychic wound that Israel’s victory – a victory that I hasten to say was deserved – caused within the souls of its Arab citizens?

The trend is clear:

The deliberate march through the Muslim Quarter was: a, impolitic (truly, was this really necessary?); b, dangerous, given the current state of affairs between Israel and the Palestinians, and c, un-Jewish. Nowhere in our sacred texts do we find any mitzvah to rub the faces of our “enemies” (excuse me – fellow residents and lovers of Jerusalem) in our victories.

Celebrations of Jerusalem Day could have been limited to the explicitly “Jewish” parts of Jerusalem – the Jewish Quarter, the Western Wall plaza or western Jerusalem. Did we have to march through the Muslim Quarter, as if to echo a fifth-grader and taunt “Nya, nya …”?

Isn’t there a Jewish way of celebrating our victory that does not require that we trample not only on human feelings but on the very sources of Judaism itself?

(Rabbi Jeffrey K. Salkin is the senior rabbi of Temple Solel in Hollywood, Florida, and the author of numerous books on Jewish thought published by Jewish Lights Publishing and the Jewish Publication Society. His blog is Martini Judaism [jeffreysalkin.religionnews.com].)