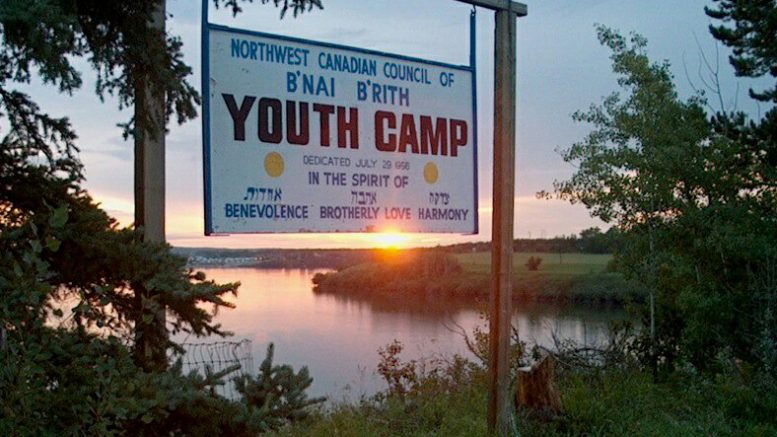 Camp BB-Riback is situated on the beautiful shores of Pine Lake Alberta.

(AJNews) – There is big news coming out of Camp BB-Riback, and it’s coming in the form of JCamp 180. The Alberta Jewish summer camp, which recently celebrated its 65th anniversary has announced it has entered into a partnership with the JCamp 180 program, which will help improve what is already considered a top-notch experience for campers.

This month, Camp BB-Riback Director Stacy Shaikin was also elected to a position on the Alberta Camping Association board.  That means Camp BB-Riback will now be represented in the industry at a provincial and in some cases a federal level.
“I am very honoured and excited about these developments for our camp community,” remarked Shaikin.

JCamp 180’s mission is to significantly enhance the long-term effectiveness of non-profit Jewish camps and other organizations that engage young people in meaningful Jewish culture and educational experiences. This is provided through incentives and consulting services that help foster Jewish philanthropy and create a positive and abundant culture.

It’s a group that Shaikin has wanted to join for some time now, and it’s an achievement he’s very proud of. It’s not just mentorship, goal-setting, and engagement that JCamp 180 helps out with though, the fundraising aspect is a huge benefit. “The cherry on top is that there’s grants for all the camps, and currently there’s one form February to the end of December, which is a 2-1 match, so … for every $2 we raise, we are matched with $1,” Shaikin says.

“We’re going to revamp all our initiatives to highlight that there’s never been more value for your dollar to invest in Alberta’s Jewish cultural experience.”

This partnership also allows Camp BB-Riback to retain its independence, he added.

“I think the culture’s always been, ‘We can take care of ourselves and we’re good,’ and I still believe as an independent cultural experience we are unique, even relative to (other) Jewish camps,” Shaikin said, admitting that it’s hard to explain.

“There’s something about Camp BB-Riback that, for the campers who go there, there’s some nuance in the personality.”

The 2020 summer was a lost one for Camp, due to the COVID-19 pandemic, but Shaikin says he’s optimistic they’ll be able to open fully this summer.

Once camp does open, there will be exciting new opportunities that Shaikin has used this time to develop and implement. For instance, campers will be able to make movies in their brand-new filmmaking program.

“I’m kind of a movie guy myself, and I always felt like making a movie was a process that taught people all kinds of different skills, one of them being working together and collaborating together, and sharing ideas,” he said.

Some of the more enthusiastic campers are “writing scripts as we speak,” Shaikin added.

He said he recruited talent from the U.K. — a film student who happened to want to spend a summer at camp in Canada — to run the program, which is intended for campers of all ages.

“I have no idea how we’re going to do it. We might be using cellphones and 8-millitres. We might guerilla this whole thing around camp, but kids are going to make a movie. And it’s a way to beef up our arts and culture programming, which is something I’m pretty passionate about.”

While Camp is an opportunity for kids to leave their modern comforts behind, Shaikin acknowledges this is a greater challenge in the 21st century.

“Kids today often mistake homesickness for missing their phones,” he said. “It’s way harder to grow up in this sensory world than it was for us … Our campers and staff might be challenged by that and have to get over that hump, but when they do it’s like the best thing ever, man. They never want to leave. And that’s the trick.”

For more information on Summer 2021, registration and employment visit www.campbb.com