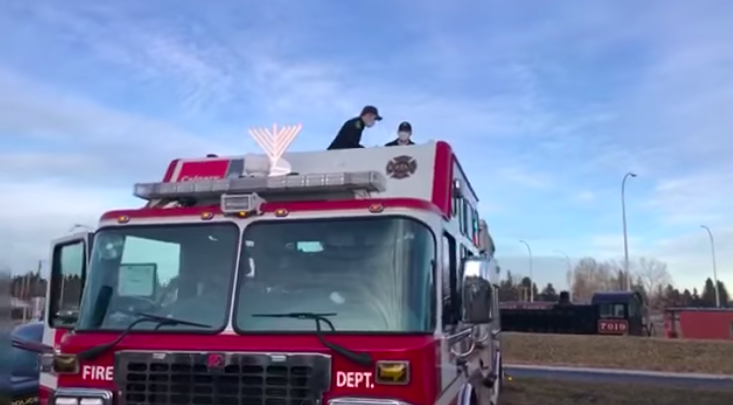 The first night of Chanukah in Calgary included the 33rd annual menorah lighting and an amazing 120 car Menorah Parade with a fire truck and a police car joining the parade.

One hundred and twenty cars, trucks and SUVs of all shapes and sizes, including 2 police cruisers & a fire truck! all with brightly lit LED Menorah’s mounted on their roofs paraded through the streets of Calgary on the first night of Chanukah in a fabulous display of Jewish pride.

To begin the festivities Rabbi Matusof and Co-executive Director Rebbetzen Rochel Matusof, were hoisted on a crane to light the giant 18’ Menorah at Calgary’s Heritage Park.  Hundreds watched the ceremony from their cars on giant video screens, and thousands more from communities around the world watched the live stream broadcast from the comfort of home.

For the second year in a row, COVID restrictions meant the community could not gather in person for the annual Menorah lighting ceremony at Calgary City Hall.  “But that didn’t mean we couldn’t celebrate together as a community and demonstrate our Jewish pride,” added Rabbi Matusof.  “We just had to do things a bit differently.”

Chabad mailed out more than 2,500 Chanukah kits to Jewish families throughout Alberta and the Yukon so everyone could participate in the community Menorah lighting from home.  Those in the Menorah Mobile parade received a box of Chanukah treats as well as latkes kept warm and fresh in special individual foil packages.

After kindling the first candle, a small army of Chabad volunteers organized all the vehicles for the parade which stretched on for several kilometers, weaving its way through the streets, including a tour of downtown Calgary.  Dozens of onlookers stopped to watch and the local news media provided extensive coverage.

“My Mum was in the parade tonight and now has a Chanukiah on her car.  A momentous moment indeed for a family of Soviet emigrants who used to hide the fact they were Jewish.” Rachel Kryener said in an online post.

There were hundreds of other poignant online comments as the event quickly went viral.  “Loved our 120 strong Chanukah parade as a community and celebrating with friends.  Happy Chanukah full of love, peace and latke grease,” said Shira Yael Kogut who added 23 photos and 6 videos to her Facebook post.

Luba Okun Harris posted: “ Mazal Tov to everyone involved in making the first annual Menorah car parade such a huge success.  It was so well run.  It was so much fun and I felt honoured and privileged to have taken part in the parade.”

As part of Chabad Alberta’s annual Chanukah outreach, Menorahs are also on display at hospitals and other public facilities throughout the province including the Alberta Legislature Building.

“We want to thank everyone for joining us in this special Chanukah celebration,” said Rebetzen Rochel Matusof. “Now more than ever we encourage you to join us and say yes to light.”

Click here and here for video of the event.