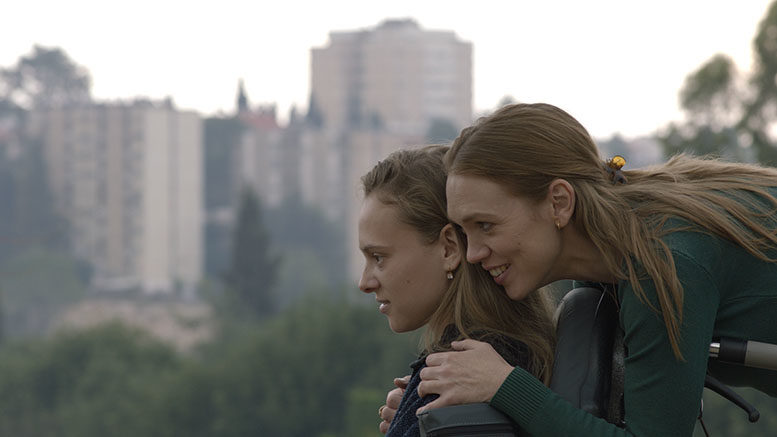 Actresses Shira Haas (L) and Alena Yiv delivered award winning performances in Asia, a debut feature film by Israeli Director Ruthy Pribar. The film won 8 awards at the Israeli Academy Awards and it will be Israel's entry for Best International Feature Film at the 2020 Academy Awards.

(AJNews) – It’s the time of year when the Calgary Jewish community starts thinking about its favourite Yontiff – that is, of course, the Jewish Film Festival –  which will take place from November 7 – 19, 2020.

This year, the Beth Tzedec Congregation Jewish Film Festival will mark its 20th Anniversary with a difference.  Due to the COVID-19 pandemic and the imperative to maintain physical distancing, film lovers will have to stock up on their favourite cinema snacks, make sure their internet connections are nice and fast and gear up for the film festival’s first-ever virtual season.

It will be well worth the effort.  As always, Jewish Film Festival Founder and Director Harvey Cyngiser promises outstanding feature films and documentaries.

A diverse Film Festival committee consisting of 23 volunteers spent the spring and summer months previewing films the same way the audience will be seeing them – from the comfort of their own homes – and then meeting via Zoom to select the best of the best.

“We are excited to once again bring some remarkable films to the community,” says Cyngiser.  “A surprising number of them relate in a big way to recent and currently breaking news that affects us on so many levels.”

One such film is SHARED LEGACIES: The African-American Jewish Civil Rights Alliance, a documentary that looks back on the alliances and friendships forged between black and Jewish Americans during the heyday of the civil rights movement in the 1960s.  Given the racial reckoning currently taking place in cities throughout North America and around the world in the wake of the George Floyd murder, Shared Legacies is a timely Film Festival offering.

“The words and, more importantly, the actions of Rabbis who marched shoulder to shoulder with black leaders and the many members of the Jewish community who joined freedom riders and helped to register black voters in the South remains a source of inspiration today and a reminder that what unites us can be so much stronger than what divides us,” Cyngiser said.

The wide appeal of Calgary’s Jewish Film Festival – which grew out of an Adult Education program at Beth Tzedec – can be attributed in large part to the Film Festival committee’s commitment to provide multiple and memorable cinematic slices of Jewish life from around the globe. The upcoming season is no different with films set in the United States, Israel, Italy and Ukraine.

Many of this year’s films celebrate the accomplishments of remarkable women including two outstanding documentaries, Golda and Mrs. G.

If you think you already know the story of Israel’s first and only female Prime Minister, you will find some surprises in Golda, by Israeli filmmakers Sagi Bornstein and Udi Nir.  The captivating documentary features never before seen footage of a frank exchange between Golda Meir and journalists who kept the cameras rolling during an impromptu conversation following an interview on Israeli TV.  This previously off-the-record window into Golda’s thoughts, combined with rare archival footage and recollections of some of Golda Meir’s friends and foes, makes for a fuller and more nuanced portrait of the controversial Golda than audiences have previously seen.

Another woman of extraordinary talent and influence is explored in Mrs. G., a highly-stylized and quirky documentary that tells the story of Hungarian-born seamstress and designer Lea Gottlieb who put Israel on the world fashion map as the founder of the Gottex swimwear empire.

Mrs. G. captures Gottlieb’s peaks and valleys in the fashion industry and her fraught relationships with her daughters while, at the same time, capturing the social history of Israel during the 1970s when Gottlieb – a Holocaust survivor – was dressing some of the world’s most famous women.

Inclusivity has been a major theme of the Film Festival since its inception in 2000.  In keeping with that long-standing tradition, the audience can look forward to Once Upon a Boy, the tender portrayal of the Hessings, an Israeli family struggling to create a happy family life for their three children despite the gaps in opportunity caused by their son Ron’s cerebral palsy.  This poignant documentary follows the Hessings’ journey to America for what they hope will be life-changing surgery for Ron.

As always, there is something for everyone at the Jewish Film Festival, including those who may be feeling sports-deprived due to the COVID-19 pandemic.

But you don’t have to be a basketball fan to be captivated by Aulcie, the eponymous documentary about Aulcie Perry, the African-American baller who led Maccabi Tel Aviv to their first European Championship win in 1977.  Perry’s sports stardom, conversion to Judaism and relationship with Israeli supermodel Tami Ben Ami made him king of the castle until his drug addiction laid him low.  But, in many ways, that is where Perry’s remarkable tale of redemption begins.

While 2020 has seen the production of stellar documentaries on a wide range of Jewish topics and personalities, there are also some notable feature films in store for this year’s Jewish Film Festival.  The Felliniesque Italian-Polish co-production Thou Shalt Not Hate – a debut feature film by Director Mauro Mancini – will be streamed as part of Calgary’s Jewish Film Festival following its premiere at the Venice Film Critics’ Week this month.

The visually stunning film begins when a doctor who is the son of a Holocaust survivor attempts to rescue a car-crash victim.  Noticing a tattooed swastika on the chest of the seriously injured man, he makes the decision to withhold life-saving care.  Guilt arising from the fatal choice leads the doctor to the children of the man he’s abandoned . . . and a demand for retribution.

Aficionados of Israeli TV who enjoyed the performances of actress Shira Haas in Unorthodox and Shtisel can look forward to a searing performance by her in Asia (pronounced ah-see-ah), an exploration of the relationship between a mother and daughter living in the shadow of the latter’s rapid decline due to a degenerative disease.  The mother-daughter drama premiered at the 2020 Tribeca Film Festival – also held online due to the Coronavirus – garnering a Best Actress Award for Haas as well as Best Cinematography for Daniella Nowitz and the coveted Nora Ephron Prize for the film’s director, Ruthy Pribar.

While a big part of Jewish Film Festival has been the excitement of gathering in person and enjoying refreshment and great conversation, the undisputed star of the show remains the thoughtfully curated lineup of Jewish films that, this year, can be enjoyed from the comfort of home.

A  mere glance at recent offerings in movie theatres (remember those?) and on streaming services demonstrates the general public’s growing taste for Israeli movies and TV and for Jewish subject matter in general, but Calgary’s Jewish Film Festival still plays an important role in bringing the world’s best Jewish cinema to local audiences.

“Most of the documentaries and feature films we choose to screen are not easily accessed elsewhere,” says Cyngiser who, over the past two decades, has built relationships with film directors, producers and distributors in Israel and around the Jewish world, often receiving word directly from them about new cinematic offerings.

When it comes to relationships, adds Cyngiser, some of the most important ones are right here at home.

“We have the best, most loyal audiences and sponsors that we could hope for,” Cyngiser says.

“We may not be able to bring them together in person because of the pandemic, but we are excited to give them great entertainment at a time when we are all hunkered down at home.  And we are blessed to know we can rely on their participation and support in a year when we need each other more than ever.”

Watch for details in the October issue of Alberta Jewish News, including a full listing of films and information on seasons passes, tickets and sponsorship opportunities, or visit www.CalgaryJewishFilmFestival.com.