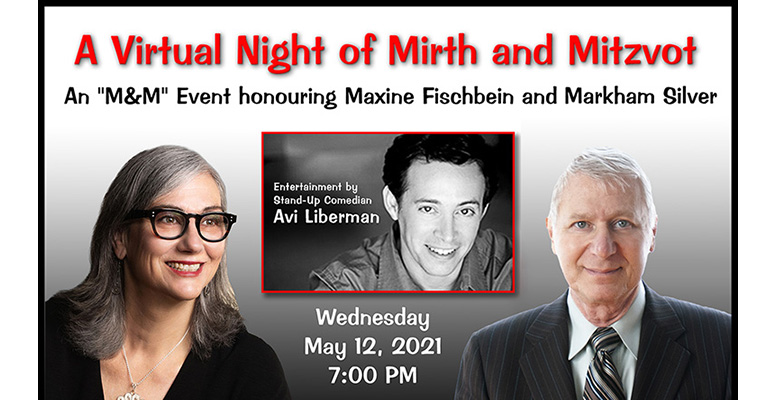 (AJNews) – Calgary’s Beth Tzedec congregation is blessed to have Maxine Fischbein and Markham Silver among its members; they are two individuals who enhance and elevate every aspect of every initiative that they undertake. The congregation will show its heartfelt appreciation at a special virtual event on May 12 at 7 pm.  The double M event, a night of mirth and mitzvot, will celebrate their contributions and enjoy the merriment of stand-up comedian Avi Liberman. Proceeds will benefit the legacy endowment fund of the Beth Tzedec Congregation Society.

“Markham Silver and Maxine Fischbein are two much loved members, volunteer builders who have made Beth Tzedec their spiritual home for decades,” explained President David Inhaber. “On May 12, they will each be awarded our Yasher Koach award which adorns the wall to the entrance of Beth Tzedec. This is an honour which has been bestowed on only a very select few recipients and one which is well deserved by Maxine and Markham.

“It takes a village to operate a shul, but it takes special people like Maxine and Markham to make things happen.

“They both continue to serve our Board of Directors (Markham as legal counsel and Maxine as Past President). They also serve in so many other ways – from actively leading services to providing sage advice to our Board; they continue to build and be of assistance when and wherever called upon.

“From the outpouring of support we have seen so far, it is easy to see why these two individuals have changed so many lives in both Jewish and non-Jewish Calgary, Edmonton and beyond.”

Beth Tzedec has played an important role in the lives of both Maxine and Markham.

“It has been a great privilege to serve Beth Tzedec, mainly because of the incredible individuals I’ve had the opportunity to learn from and to emulate,” explained Maxine.

“This recognition by my Beth Tzedec family is a great honour, one that is multiplied because it is shared with my friend and mentor, Markham Silver. While I am truly grateful for the recognition, this tribute to us is really a reflection of the amazing leaders who came before us and the many passionate supporters of Synagogue life with whom Markham and I are so fortunate to work, pray and play.” 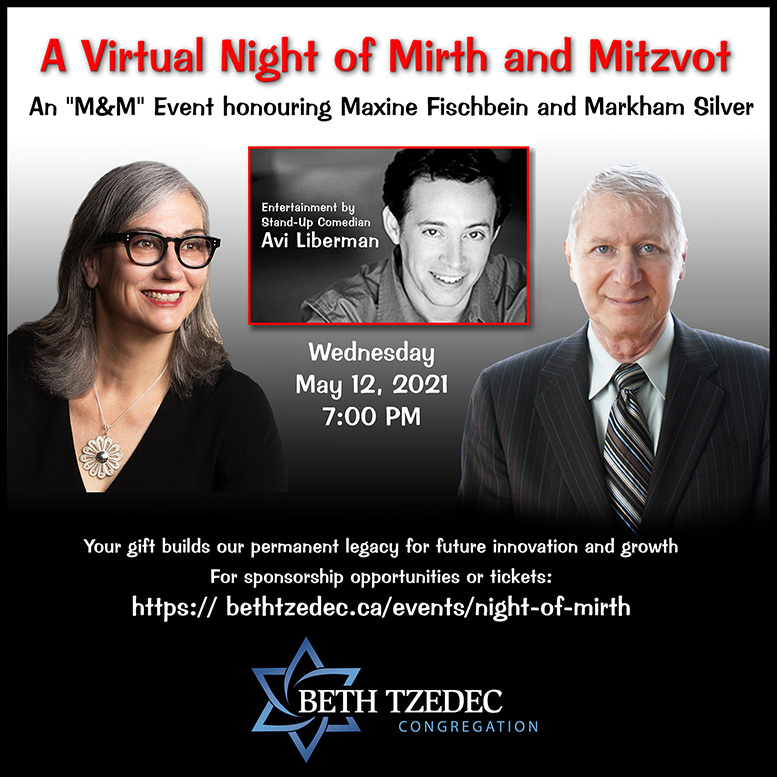 Markham’s volunteer presence in Calgary is as impressive as his legal career.

When he and his wife, Calgarian Lisa (Kowall) were married in Calgary in June ‘87, the Beth Tzedec Synagogue was basically a “foundation hole at Glenmore Trail and Elbow Drive” at the site of the former Beth Israel Synagogue, noted Markham.

“In May 1998 with our children, Josh and Rebecca in tow, we moved from Toronto to Calgary. By then we were no strangers to Beth Tzedec, having spent some holidays in Calgary and even a couple of High Holidays. Within a month, I was “voluntold” that I would be on the Board. And so it began,” he quipped.

“Since that fateful nomination in June ‘98 I have accepted the responsibilities as Chair of the Board, Vice President, Director, Ritual Chair and Pro-Bono Counsel. I have advised Boards and Executives as well as liaising with external counsel. In addition, as the Beth Tzedec representative I sat on the Calgary Jewish Federation’s Committee for Jewish education.”

In addition to his governance roles over the years, Markham has frequently been front and centre leading prayer services and leining Torah and Haftorah as well as being a Baal Tekiyah sounding the Shofar and being the Chazzan Shenei for High Holiday Services. He has been a member of the “ad hoc” choir and participated in a number of other musical evenings under several Cantors. He also served as moderator for an Interfaith symposium hosted at the Synagogue with the Calgary Muslim community.

Maxine and Markham have worked together in various capacities both in synagogue governance (including on Rabbi, Cantor and Executive Director search committees) and in other volunteer positions within the Jewish Community in Calgary, including Calgary Jewish Family Services.

“I am privileged to share in this honour with her,” said Markham.

Born and raised in Edmonton and a graduate of the Edmonton Talmud Torah and University of Alberta, Maxine (nee Wolfman), a lifelong shul-goer, has always taken joy in community, both as a professional volunteer and a communal professional.

After she and her husband Milt moved to Calgary in 1993, Maxine served on various boards and executives including Jewish Family Service Calgary and the Jewish Historical Society of Southern Alberta. She volunteered in multiple capacities for UJA, Calgary Jewish Federation, Jewish National Fund, Akiva Academy and The Calgary Jewish Academy. Prior to becoming Beth Tzedec President in 2013, she served as ritual chair and VP (Personnel). Along the way she served on the Beth Tzedec Sisterhood board and executive and represented Beth Tzedec on the Pacific Northwest Region board of the United Synagogue of Conservative Judaism. She is also a long-serving Beth Tzedec Congregation Jewish Film Festival volunteer and has played an active role in other cultural, educational and fundraising events at Beth Tzedec.

Throughout her adult life, Maxine has been a freelance writer and editor and regular contributor to the Jewish Free Press and, more recently, Alberta Jewish News.  She served as a writer and editor of A Joyful Harvest for Jewish Historical Society of Southern Alberta and has contributed to the JHSSA journal Discovery. She served for several years as communications director for Calgary Jewish Federation.

“Throughout my life, I have directly benefited from the efforts of countless community leaders in both Calgary and Edmonton,” remarked Maxine. “The Edmonton Talmud Torah and Beth Shalom and Beth Israel Synagogues helped my parents to raise me. Akiva Academy, The Calgary Jewish Academy, Camp BB Riback and Beth Tzedec helped us raise our daughters, Alysa and Emma. Volunteering has never really been a matter of choice for me. I owe a tremendous debt of gratitude and feel compelled to pay it forward.”

“I have always been very giving of my time to the Beth Tzedec Community,” said Markham. “It really is the extension of family. Being part of a kehillah like the Beth Tzedec is very rewarding and at times trying. As Golda Meir once said to Richard Nixon, she is the Prime Minister to 3 million Prime Ministers! It is gratifying that every voice may be heard, and everyone has the opportunity to give effect to their positions and opinions even if those do not carry the day.”

Markham has been involved in Beth Tzedec’s business for the last 23 years.

“I am no longer in governance as I am living with stage 4 lung cancer. I never asked for recognition and I know that there are others equally if not more deserving than I. It is time to pass the gauntlet to the next generation and I hope that as an “elder statesman” of this congregation I may be able to continue to lead by example. I am grateful for having had the opportunity to serve the kehillah and am truly touched that I am being honoured in this way.”

David Inhaber noted that “as humble and as generous as they are, both Markham and Maxine agreed that the proceeds of this event should benefit the legacy endowment funds of the Beth Tzedec Congregation Society, to support our Shul in perpetuity. They are once again demonstrating how important a strong shul is to a strong Jewish Community.”

“Supporting Beth Tzedec is a top priority for me, so I am moved by the generous support of my friends, family and fellow congregants,” concluded Maxine. “Without strong Synagogues we cannot reasonably expect a Jewish future. As our sages say in Pirkei Avot: You are not obligated to complete the work, but neither are you free to desist from it.”

Visit bethtzedec.ca/events/night-of-mirth for more information about tickets and sponsorship packages.

Be the first to comment on "Calgary Beth Tzedec honours Maxine Fischbein and Markham Silver: May 12"