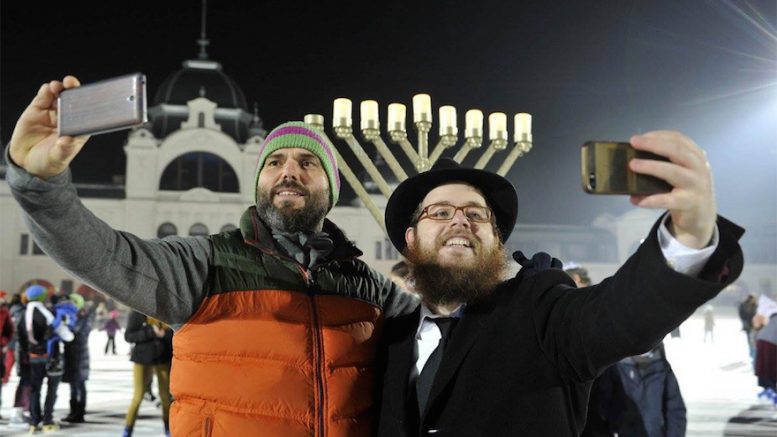 BUDAPEST (JTA) — The outdoor ice skating rink — the largest in Central Europe — in Budapest’s city center has been part and parcel of Hungary’s Christmas tradition for nearly 150 years.

Stretching across 3.5 acres between Heroes’ Square and Vajdahunyad Castle, the Budapest City Park Ice Rink draws hundreds of thousands of visitors from across the country each winter. They come for the Christmas market, the winter festival, and the promise of smooth ice and affordable skate rentals.

It’s an enormous and enormously popular attraction, so City Park Ice Rink is busy nearly every day with the Christmas revelers. Except, however, on the first night of Hanukkah.

On that evening, the rink is populated with hundreds of Jews. They gather to sing Hanukkah songs as they watch rabbis on skates light a large menorah built by EMIH, the local branch of the Chabad Hasidic movement. With help from a donor in Budapest, they rent the rink for $12,000, and distribute sufganiyot and tea to holiday revelers who have pre-purchased tickets.

The City Park Hanukkah celebration started just over a decade ago, and it is unusual in that it’s one of just a few places in Europe where the North American “Hanukkah on ice” tradition has taken root. In the U.S., Chabad rabbis organize dozens of Hanukkah on ice events each year featuring the ceremonial candle lighting, munching on the deep-fried Hanukkah delicacies and ice skating, with games for children and training for the inexperienced.

But in Budapest, the event is part of a broader “coming out” of Jewish communities in the former communist bloc, where after years of practicing their religion underground, Jews are now celebrating Hanukkah in very public ways.

“Hanukkah used to be low key in Budapest, as was everything else connected to Judaism during socialism,” said Rabbi Boruch Oberlander, one of the early organizers of Budapest’s Hanukkah on ice tradition. Back then, Jews feared that practicing any religion — and Judaism especially — invited persecution.

“But it’s not good for Judaism when things are low key,” he added, because it made people leave the tradition. Throughout the Soviet sphere of influence, decades of religious persecution compounded the Nazi-caused devastation. Unaware or ashamed of their Jewish identity, countless Jews in that part of the world assimilated, distanced themselves from Judaism and produced children that no longer regarded themselves as Jewish.

Against this background, Hanukkah has a special significance in the post-communist world, said Oberlander, a Brooklyn-born rabbi who settled in Budapest 28 years ago as an emissary of Chabad.

Oberlander isn’t just referring to public events at ice skating rinks — there’s also the longstanding practice of placing Hanukkah menorahs on the windowsill, specifically for all to see.

Oberlander, 53, does not skate himself, he said, explaining he’s “not very good at it.” But in his community, the event is one of the most popular because of how it combines seasonal amenities, sports and religious ceremony in a fun, family-friendly setting.

His interpretation of how Jews should celebrate Hanukkah is shared by many rabbis all over the world — Chabad rabbis, in particular — who stage large, public menorah lightings in central squares of major cities. New York, for example, boasts two such massive events: The Grand Army Plazas in both Manhattan and Brooklyn have been in competition over which holds the title of World’s Largest Menorah.

Such displays inspired Jews to think big in Western Europe, ending decades in which communities traumatized by the Holocaust had shunned initiatives that advertise Judaism.

Since 2013 in the Netherlands, for example, the chief rabbi has been lifted in a crane (along with the Israeli ambassador) to light the first candle of a 36-foot menorah built for the Jewish community by Christian Zionists who say it is Europe’s largest. In Berlin, a giant menorah is lit at the Brandenburg Gate monument.

Like the massive menorah lightings, Europe’s growing Hanukkah on ice trend — which this year can be observed in Budapest, Moscow and London — also started in the United States, where it is occurring this year in locations from Wollman Rink in New York’s Central Park, to Houston to San Mateo, California.

In Moscow, the popular Hanukkah on ice event, which began in 2012, is eclipsed by what may well be the largest celebration of Hanukkah in Europe: the annual gathering of 6,000 Jews  at the State Kremlin Palace for an evening of dance and performances, as well as the bestowing of awards to communal VIPs. Organizers say the venue is important to them for symbolic reasons because it produced some of the world’s worst anti-Semitic policies after the fall of Nazi Germany.

In Budapest, the city’s summertime Jewish cultural festival is also an example of Jews reclaiming their place in society. Judafest, which was held for the 10th consecutive year, draws thousands of Jews and non-Jews to the historically Jewish 7th district for sessions, activities and exhibitions connected to Jewish cooking, dancing and Yiddish.

But there’s something special about the Hanukkah on ice event, which is held at an iconic location with strong ties to the holiday period for all Hungarians.

“I think it indicates a generational difference in which young people our age don’t think twice about participating in an event that celebrates, publicly, our Jewish identity,” Eszter Fabriczki, 30, a regular at the event, told JTA. “Holocaust survivors passed the fear element to their children, but not to their grandchildren.”

Against this background, Fabriczki said her father “is freaking out over my wanting to give my son a circumcision, if I have a son, because then he could be identified as Jewish.” She has no children, adding: “I have no thoughts of this kind, living a pretty comfortable Jewish life.”

Despite the generational gap it exposes, Fabriczki said she and her mother have bonded over the City Park Ice Rink Hanukkah event.

“I’m quite religious but my mother is not, so the Hanukkah on ice event is something we can share because she likes to ice skate and it’s important for me to observe all the Jewish holidays,” Fabriczki said.

But for 16-year-old Sara Szalai, Budapest’s Hanukkah on ice means quality time with her dad, Kalman, who is the managing director of the Jewish community’s Action and Protection Foundation — the local equivalent of the Anti-Defamation League, which monitors anti-Semitic incidents.

Neither are particularly concerned, she said, about self-identifying as Jews at the event.

“Maybe there are people who think this way, but for us it’s not a big issue,” said Szalai, who added that she’s a “pretty good” skater.

“It’s usually pretty crowded there, so it’s a rare opportunity to really skate properly on Hanukkah without worrying about bumping into people,” she said.

The event typically unites Jews across the religious-secular divide. Hanukkah has fewer restrictions than other Jewish observances such as Shabbat or Yom Kippur, when observant Jews are not allowed to operate machines, travel or perform any action classified as work.

In Hungary’s fractious Jewish community — where interdenominational tensions are rising amid polarizing policies undertaken by the nationalist government — the Hanukkah on ice event offers a rare armistice in which the secular, religious, local and Israeli Jews put aside their differences for a night of fun.

Be the first to comment on "In Budapest, Hanukkah comes out of the shadows and onto the ice rink"