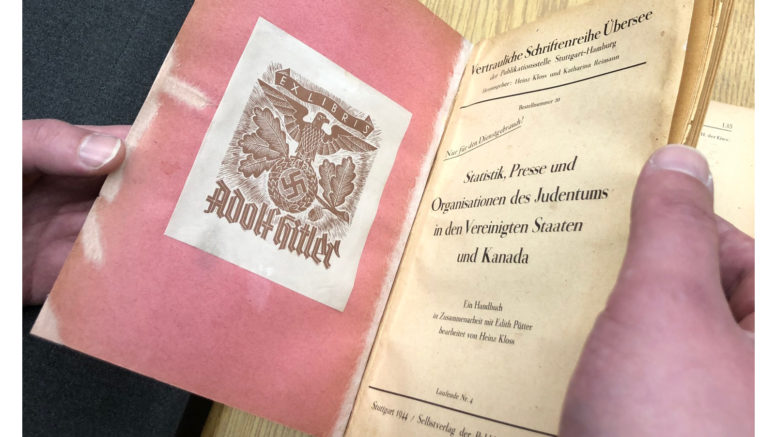 A 1944 book owned by Adolf Hitler and acquired by Library and Archives Canada in 2019, hints at the story of what might have happened in Canada had the allies lost World War II.

(AJNews) – Edmontonians who attended or live streamed this year’s Yom Ha’Shoah memorial observance at the Alberta Legislature grounds will certainly remember a poignant and stirring address given by Senator Paula Simons. In it, the Edmonton-born journalist turned politician discussed a book – a malevolent, sinister, evil, and shockingly comprehensive publication of statistical information pertaining to the residences of Jews living in North America during World War II.

The Senator first spoke about this book publicly in an article she wrote for Alberta Views: The Magazine for Engaged Citizens in April of 2021. She writes: “Compiled by German intelligence in 1942, it details how and where to find the Jews of North America. While the first two-thirds of the book details Jewish organizations and clubs in the US, the final section provides similar demographic data for the Jews of Canada, based on public census and immigration information. The guide includes the ‘helpful’ information that 48,724 Jews live in Montreal, 45,305 in Toronto and 17,236 in Winnipeg. But while those were the largest centres of Jewish population, the book records that 1,622 Jews lived in Calgary, 1,057 in Edmonton and 692 in Saskatoon.”

“Here’s the Holocaust brought home,” continues Simons, emphasizing how close The Final Solution really came to Canadian cities. “A concrete testament to Nazi plans and ambitions to bring the extermination of the Jews to Canada. Some of those anonymous Jews neatly enumerated in Hitler’s columns of numbers were my own father, uncles, aunts and grandparents, who were living in Edmonton.”

In a recent Zoom interview with AJNews Senator Simons recalled a picture of her late father, the son of an Edmontonian Jewish family, standing in a studio in the Boyle-Macauley neighbourhood of the city, taken the same year that the book was published – the magnitude of this realization resonates strongly for her still.

This infamous, and once monumentally dangerous volume is now housed in the Jacob M. Lowy Collection of the National Library and Archives of Canada along with phenomenal treasures of the Jewish World. Many international organizations, museums, and historical societies declined to bid on the volume when it first came up for auction in 2019. The United States Holocaust Memorial Museum was one such group; their mandate prohibiting the purchasing of such artifacts is intended to ensure that relics of Nazi atrocities are not treated as memorabilia to be bought and sold. Procured from a private collector, the National Library and Archives of Canada purchased the book, once owned by Adolf Hitler himself, for a mere $6,000. A book that had the potential to obliterate North American Jewry, reduced to a price-tag and transaction – or so it would seem.

Now, along with the first Haggadah ever printed in English, complete with wine smudges from counting out each plague, and a Megillah that survived Nazi attacks, Hitler’s guide for exporting The Final Solution to North America sits under the watchful guardianship of some of the country’s best archivists.

“It’s a numinous experience to walk in there and see all of the books they have amassed,” said Senator Simons. “In the best rabbinical tradition, the archive is a celebration of Jewish life, intellect, and faith. That places it so that we understand how hateful this book is in contrasts with all the other books in the collection.”

Senator Simons went on to explain that: “their mission is to collect every book ever published about Canada. No matter how good or bad – they have a mandate. I was able to meet with the Lowy’s chief archivist and curator, and after that conversations I can say that it was absolutely the right call. This way the book will be in a respected properly curated collection rather than sold into the hands of neo-Nazis.”

Most Canadians remain unaware that such a book even exists, and few will ever see it. “This book is not out on public display,” Senator Simons said reassuringly. “There are layers of isolation. It is not something for the general public. But it is there for academics and researchers. This way it is not regarded as a fetish object,” she explained further.

“This is a book that is a part of our Canadian history, not just our Jewish history.”

Senator Simons went on to comment that she fears for “historical illiteracy” and that the book can do much to silence Holocaust denial “dressed up as academic free speech.”

“I’ve tried to do my part to educate people about the book and what it says of the reality and ambition of the Holocaust,” said Senator Simons.

Indeed, she has continued to speak about her own experience prolifically in hopes that those listening will not just file away the knowledge that such a document exists but reflect on what kind of societal mentality made the commissioning of such a publication possible.

“We say ‘never again’ when we speak of the Holocaust, and this book reminds us that we need constant vigilance.  Hate can happen everywhere if the ground is prepared for it.”

The book is an important contribution to the Canadian consciousness, despite its venomous origins. For Jews with longer North American lineages, the realization that the names and locations of their own family members might be housed in this book is a stinging and painful reminder that the Holocaust was not isolated to Europe. For those who survived the horror and decimation orchestrated by the perpetrators of The Final Solution, the book has the potential to play an important role in preserving history and safeguarding the factual education of generations to come.

Within the global Jewish consciousness, the Holocaust is never far away. For that reason, the impact that this book may have for non-Jewish Canadians is also quite significant. Ultimately, the existence of this volume, and what is contained within it, is haunting, but does much to emphasize the importance of maintaining dignity and fair treatment for all.