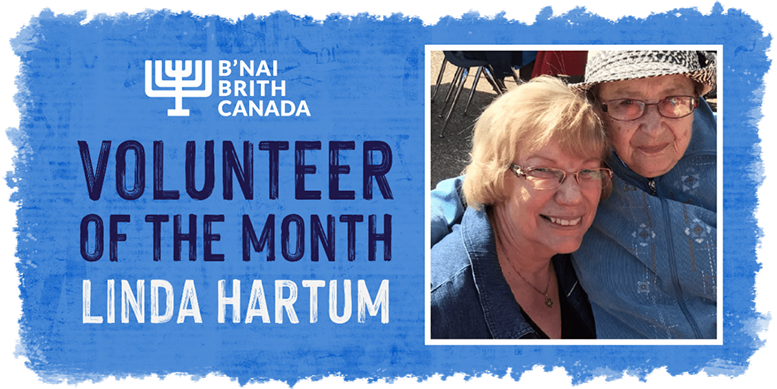 (June 2021) – B’nai Brith Canada has introduced a new Volunteer of the Month feature to pay tribute and express gratitude to exceptional volunteers who have given their time and energy to further the missions of the grassroots, human-rights organization.

This month’s volunteer of the month is Linda Hartum from Edmonton.

Linda Hartum’s love of helping others and giving back to her community have led to her emergence as an invaluable member of our volunteer team in Edmonton, says Abe Silverman, B’nai Brith Canada’s Manager of Public Affairs in Alberta.

Back in 2017, Linda attended a seminar given by Abe Silverman. The two got to talking and discovered they had a number of common interests, including a passion for Israel. Abe asked Linda to join his volunteer base in Edmonton.

“From the moment I accepted the job with B’nai Brith, I knew I wanted Linda Hartum on my team,” Abe said. Since then, the group has undertaken numerous projects, such as contributing to B’nai Brith’s Annual Audit of Antisemitic Incidents, where Linda played a supportive role and helped disseminate information. She was also involved in some of the discussions that preceded the successful banning of an antisemitic radio program in Alberta. Now, the team is taking on the issue of removing a prominent statue of a Nazi collaborator on display at the Ukrainian Cultural Centre.

One project in particular appealed to Linda: The Diverse Minds Creative Writing Competition. When Linda learned of the Diverse Minds competition — a B’nai Brith initiative designed to promote respect for others and encourage inclusion among young people through peer-to-peer learning — she was elated.

“I nearly jumped off my chair,” she said. To the grandmother of 12, this project “opened up a lot of conversations about […] being respectful of peoples’ differences […] and having people be conscious of how we can present ourselves and also how we receive others.”

B’nai Brith Canada congratulates Linda and the team on a tremendously successful Diverse Minds Creative Writing Competition in 2021 in Edmonton and thanks her for all the incredible work she has done and continues to do on behalf of B’nai Brith Canada.