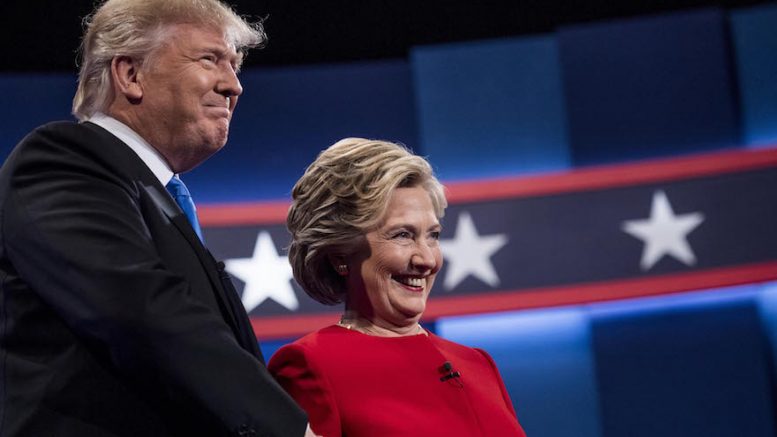 WASHINGTON (JTA) — What did we learn about Donald Trump, Hillary Clinton and the Jewish vote from the debate on Monday night?

Except for an extended tussle about the Iran nuclear deal, not a whole lot. Race was an issue, but Clinton did not make an issue of the support the Republican nominee gets from the alt-right, a breeding ground for white supremacists and anti-Semites.

Nevertheless, there were some obvious moments, and others less obvious. Let’s run through them.

Is Bibi a happy camper?

The substance: Trump asserted that the deal reached last year between Iran and six major powers, led by the United States, exchanging sanctions relief for a cap on uranium enrichment and other restrictions, will make Iran a major power.

“You started the Iran deal,” he said to Clinton. “That’s another beauty where you have a country that was ready to fall, they were doing so badly. They were choking on the sanctions, and now they’re probably going to be a major power at some point the way they’re going.”

Clinton replied that Iran was much less of a threat with the deal in place.

“I spent a year and a half putting together a coalition that included Russia and China to impose the toughest sanctions on Iran, and we did drive them to the negotiating table,” she said. “And my successor, John Kerry, and President Obama got a deal that put a lid on Iran’s nuclear program. Without firing a single shot.”

“This is one of the worst deals ever made by any country in history,” he said. “The deal with Iran will lead to nuclear problems. All they have to do is sit back 10 years, and they don’t have to do much. And they’re going to end up getting nuclear. I met with Bibi Netanyahu the other day. Believe me, he’s not a happy camper.”

Tuesday morning, ahead of a Cabinet meeting, Israeli Prime Minister Benjamin Netanyahu didn’t seem too unhappy a camper. In his opening remarks, Netanyahu said the Iran deal was still a thorn, yes, but the $38 billion, 10-year defense assistance package he just secured from the Obama administration pleased him.

“Last Wednesday I met with President Obama,” he said. “It was an excellent meeting. I thanked him for the historic security assistance agreement that we signed; the largest in U.S. history with any country. This agreement will ensure our military capabilities and our defensive capabilities against missiles in the coming decade.

“It is no secret that President Obama and I have had our disagreements, first and foremost on the Iranian issue. But as it is clear, these disagreements have not clouded the strong and solid relations between the countries at all.”

Clinton cited two federal housing lawsuits against Trump and his father in the 1970s filed because of a pattern of refusing to rent properties to African Americans.

In his defense, Trump recalled his battle in the 1990s with local authorities in Palm Beach, Florida, who he said were resisting relaxing local ordinances because his Mar-a-Lago was open to all.

“In Palm Beach, Florida, tough community, a brilliant community, a wealthy community, probably the wealthiest community there is in the world, I opened a club, and really got great credit for it,” he said. “No discrimination against African-Americans, against Muslims, against anybody.”

The “anybody” included Jews. Trump at the time accused the Palm Beach poobahs of anti-Semitism, which got him a rebuke from the Anti-Defamation League’s then-director, Abraham Foxman, who according to The Wall Street Journalreporting at the time “was concerned that Mr. Trump was using the charge of anti-Semitism for his own mercantile ends.”

Foxman later modified his tune, saying the battle, whatever Trump’s motives, shone a light on bad behavior in the tony enclave and that other clubs in Palm Beach were relaxing discriminatory restrictions.

Jewish woman is unkind to Jewish man, film at 11

Was Trump going to mention the tensions between the Democratic National Committee and the Bernie Sanders campaign, which led to the resignation of DNC chairwoman Debbie Wasserman Schultz when hacked emails confirmed her team did not like the Vermont Independent senator upsetting the apple cart?

You bet he was!

Oddly, his remarks about that clash  — between the first Jewish candidate to win major party nominating contests and the most senior Jewish official in the Democratic Party — came during Trump’s response to a question about defending against cyber attacks. The Washington Post used his rather lengthy and discursive response as an example of “kitchen sinkiness” — the candidate’s tendency to pile on information when entering unfamiliar territory.

This exchange, over Clinton’s use of a private email server while she was secretary of state:

Clinton: I do. You know, I made a mistake using a private email.

Trump: That’s for sure.

Clinton: And if I had to do it over again, I would, obviously, do it differently. But I’m not going to make any excuses. It was a mistake, and I take responsibility for that.

Voters will have to decide if in the weeks leading up to Yom Kippur, Clinton’s acknowledgement of her mistake was adequate or, as Trump suggests (in so many words) that she hasn’t done full teshuvah — repentance.

Sheldon Adelson, the pro-Israel casino magnate and billionaire, was in the front row at Hofstra University on Long Island to watch the debate, and was swamped by well-wishers who sought him out in the hall. Earlier in the day he was honored in Washington, D.C., at the close of the Israeli-American Council’s annual conference.

Adelson and his wife, Miriam, reportedly committed $25 million to electing Trump, so the deference he was shown was no surprise – although maybe Rudolph Giuliani, the former New York mayor who prepped Trump for the debate and was caught on video literally kissing Miriam Adelson’s ring, overdid it.

The Adelsons also chatted with Don King, the Trump endorser and boxing promoter who decades ago did time for stomping a debtor to death, and who was wandering around the hall waving two flags — one American, one Israeli.

Post-debate, King told Mediaite that Trump’s debate performance was poor enough that “He’s got to sit down, and pray, and get himself together.”

Does Clinton know a ‘shayna punim’ when she sees one? Yes, she does.

“The central question in this election is really what kind of country we want to be and what kind of future we’ll build together,” Clinton said in her opening remarks. “Today is my granddaughter’s second birthday, so I think about this a lot.”

Thinking about Charlotte, who is daughter to Chelsea Clinton and her Jewish husband, Marc Mezvinsky, made Clinton grin.

Trump, for his part, didn’t mention his Jewish grandchildren.

And maybe that made all the difference. If Clinton’s performance last night was as relaxed and commanding as many commentators said it was, she wouldn’t be the first grandparent to be buoyed by a grandchild-triggered endorphin rush — although this rush may have historic consequences.