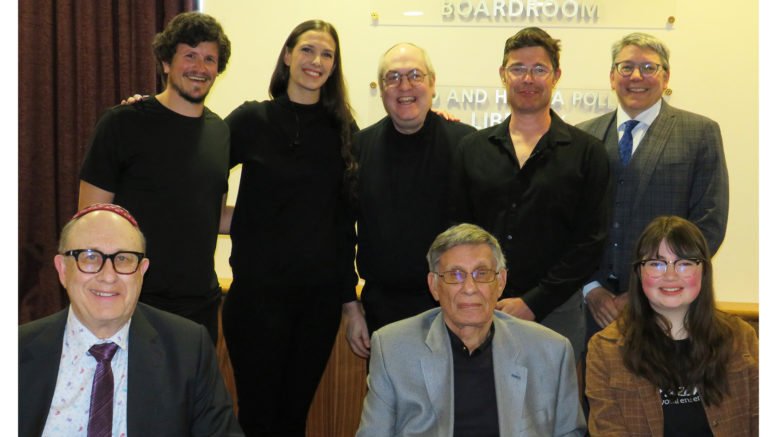 Playwright Leonard Stone (bottom centre) and Beth Israel Synagogue presented a one night only staged-reading of his new play "Girl from Treblinka."

(AJNews) – On the evening of May 23, Beth Israel Synagogue’s bimah was transformed into a theatrical stage for a one-night-only staged-reading of Leonard David Stone’s newest play, The Girl from Treblinka. The ‘stage’ was set in a sparce fashion reminiscent of a black-box theatre, with minimalistic furniture befitting the play’s abstract approach to conventional setting. As attendees filed down the centre aisle of the shul, it almost felt as though one truly was entering a modest playhouse.

Beth Israel Synagogue’s Board President, Shane Asbell, welcomed the audience and introduced the man of the hour, long-time performing arts careerman, Leonard David Stone.  Stone explained that the initial seed of inspiration for his work was planted thirty-eight years ago in West German Berlin. His creative vision solidified and evolved further after watching the Polish government’s official ceremony commemorating the 75th anniversary of the liberation of Auschwitz, live on late-night television.

The concept of a staged-reading exists to allow playwrights a platform from which to workshop in-progress material and preview new content. Actors have minimal time for traditional rehearsals and appear on stage armed with scripts in hand. Blocking is typically only for essential movements, and notes are scribbled hastily in margins and between lines of text. The director has the opportunity to provide only the most vital guidance and instruction. By nature, a staged-reading presents differently from conventional dramatic performances.

Despite only having had mere hours to rehearse the emotionally and historically poignant script, the actors who brought life and voice to Stone’s characters were captivating. Most notably, the play’s Narrator, Reed McColm, resonated both in performance and lasting impression. Serving as tour-guide through an ethereal plane between existences, his role provided the structure and essential commentary needed for the audience to accurately interpret the malleability of time and space within the work. His biography boasts a lifelong passion for, and success within the performing arts. Many in the community may remember him as Harry Truman in Stone’s debut work, Truman’s Jew. The sincerity with which McColm existed within every moment of the performance showcased his natural affinity for creative transformation and honesty of portrayal. Kayla Asbell portrayed the leading role of a young Jewish woman from Berlin murdered at the Treblinka death camp. Her performance was filled with passion and theatricality.

Stone’s script inhabited a realm outside of conventional settings and was self aware. Actors routinely broke the fourth wall, directly engaging the audience. The play’s acknowledgement of itself as a work of theatrical invention, and not a simulation of reality, helped to present the work as one intended to provoke discussion and further reflection. The bending of temporal and physical boundaries in Stone’s avant-garde abstraction of time and space was an excellent platform from which to explore greater concepts of morality, culpability, and guilt.

Vergangenheitsbewaltigung, the process of reconciling with the past, is a term that bares great significance when dealing with any examination of accountability or generational responsibility. Stone’s play presented a number of ideological questions – none with simple answers. Approaching any creative endeavor with the Holocaust as backdrop is a monumental undertaking. The focus on the chilling efficiency of the Treblinka death camp served as a haunting reminder of how sinister the Nazi agenda was, and how vital it remains to amplify the message – never again!