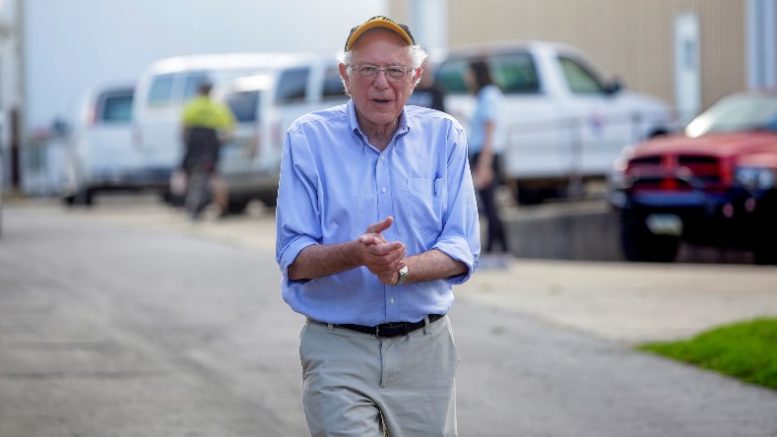 NEW YORK (JTA) — Bernie Sanders wants you to know that he’s not grumpy all of the time.

“There are some times I’m not grumpy. Now is not one of those times,” he says, a wry smile crossing his face.

This might be the most Jewish moment of Sanders’ latest interview with NowThis — a progressive social media video site with a following — even though he was asked about what it would mean to be the first Jewish president.

The ten-minute interview, titled “Twenty Questions for 2020,” was designed to help Sanders try to connect with voters on a more personal level. It tackles Sanders’ growing focus on racial justice (along with income inequality), but also his sleep-deprived schedule, his basketball skills and whether he thinks he can deliver on any of his far-reaching promises to inject democratic socialism into the U.S. government if he’s elected.

‘Our job is to transform this country.’ — @BernieSanders has big plans for America. In the latest #20QuestionsFor2020, he explains why he’s not worried about overpromising pic.twitter.com/iyAj1D5BLa

NowThis did also ask Bernie a couple of questions about what it would mean to be the first Jewish president, and what it’s like to experience discrimination. But in typical Sanders style, he did not seem eager to discuss that part — or any part — of his personal life.

After talking about diversity in general terms in his first Jewish president answer, he pivoted to barriers faced by other groups in American society, from women to the elderly. (Though, to be fair, that one is personal to him, too. Sanders is as elderly as he is Jewish.)

“Being Jewish, I get hit every now and then with anti-Semitism,” he said. “You respond with anger, and you respond by appreciating what it is to understand that there are people in the African-American community, in the Latino community, in the gay community, women, who are discriminated against every day.”

Sanders whiffed on a soft pitch when NowThis asked him who would play him in a biopic. The only right answer to this question, as demonstrated by Saturday Night Live (and common sense), is Larry David. Sanders should know that because the two of them appeared together on Saturday Night Live and they’re actually (obviously) distant cousins. Instead, this was his answer:

Let’s blame it on his lack of sleep.