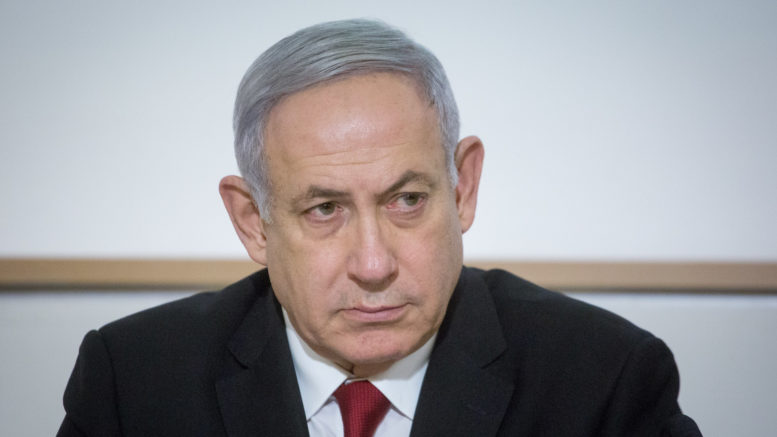 By Ben Sales and Shira Hanau (JTA) — After 12 years, seven elections and three corruption charges, Benjamin Netanyahu is no longer the prime minister of Israel.

Netanyahu, who served as Israel’s leader continuously beginning in 2009 and holds the distinction of being the country’s longest-serving prime minister, was removed from the job in a razor-thin vote in the Knesset, Israel’s parliament, on Sunday. The vote, 60-59, installed a new government with the narrowest of majorities, composed of eight parties spanning Israel’s political spectrum and dedicated to one goal: ending the Netanyahu era.

The new government is headed by Naftali Bennett, a right-wing former deputy of Netanyahu who broke away from him. Bennett is the son of American immigrants to Israel and as an adult lived for a time in New York City. He speaks fluent English.

In an address before the vote, Bennett thanked Netanyahu for his years of service, even as members of Netanyahu’s Likud party heckled him and shouted in attempts to drown out his speech. Bennett pledged to work on behalf of all Israelis and extricate Israel from the electoral crisis that has frozen its politics for two years, sending Israelis to the polls in four largely inconclusive elections since 2019.

“We are facing an internal challenge, a divide in the people that is being seen at these very moments,” he said as the shouting continued.

Bennett’s governing coalition is remarkable and unprecedented in ways that also make it appear precarious. It is the first government in Israeli history to include an independent Arab-Israeli party, the Islamist Raam, as a partner. It includes parties that are both staunchly right wing and staunchly left wing, in addition to two centrist parties. It has a record number of women serving as ministers. It was made possible only because several former close allies of Netanyahu joined his rivals.

That group of Netanyahu defectors includes Bennett, whose Yamina party holds only six of the Knesset’s 120 seats but served as a linchpin for the new coalition. The largest party in the coalition is the centrist Yesh Atid, which is headed by Yair Lapid. Lapid is slated to take over as prime minister in 2023, and until then will serve as foreign minister.

Speaking before the parliament on Sunday, Lapid opted to skip his written speech and denounced the hecklers. He also apologized to his mother for the spectacle.

“I wanted her to be proud of the democratic process,” Lapid said. “Instead she and every other citizen is ashamed of you, and reminded of why it is necessary to replace you.”

The day was not without drama, a fitting end to recent weeks in which the future shape of the Israeli government was tense and uncertain.

Netanyahu, who has called the new government dangerous and fraudulent, has put heavy pressure on the incoming coalition’s right-wing members to return to his side. In his final speech as prime minister, delivered ahead of the vote, Netanyahu attempted to remind members of the parliament why he should remain as prime minister, running through a list of his accomplishments and warning that the new government would not be able to stand up to the security threats facing Israel, particularly from Iran.

“The prime minister of Israel must be able to say no to the American government,” Netanyahu warned, referring to attempts by the Biden administration to revive the Iran deal.

Under the new government, Netanyahu is leader of the parliamentary opposition, which is mostly made up of his Likud party and its right-wing religious allies. (Ayman Odeh, a Knesset member and head of the Arab Joint List, welcomed the outgoing prime minister to the opposition in a tweet Sunday.) In his speech, Netanyahu predicted that the new government will not last long and he would soon return to power.

Whether that prediction bears out depends on how well the new, ideologically incongruous government can hold together. It is sharply divided on nearly all of the core questions facing Israeli society, from the future of the West Bank to LGBTQ rights.

One potential area of common ground involves religious policy. This is the first government since 2015 that does not include haredi Orthodox parties. That means state funding for haredi institutions may be cut, and Israel could see liberalization of its laws regarding Jewish conversion, public transportation on Shabbat and a space for non-Orthodox worship at the Western Wall.

For now, however, the new government has accomplished its primary objective: removing Netanyahu from office. Netanyahu, who also served as prime minister from 1996 to 1999, had become nearly synonymous with Israel during his decade-plus in power.

He was known internationally for his campaign against the Iranian nuclear program and his close personal involvement in Israel’s relations with the United States — from his frosty attitude toward Barack Obama to his close friendship with Donald Trump. Within Israel, supporters hailed him for a long stretch of steady economic growth; relative security, day to day, for Israelis; close relationships with world leaders; the string of normalization deals last year with several Arab states; and, recently, a world-leading COVID vaccination drive.

Opponents in Israel derided him for maintaining the status quo regarding Israel’s occupation of the West Bank, as well as for a persistent housing crisis. He passed a controversial law in 2018 defining Israel as the nation-state of the Jewish people, which critics said marginalized Israel’s Arab minority. American Jewish organizations as well as some secular Israelis also criticized him for perpetuating haredi control of Israel’s religious establishment to the exclusion of non-Orthodox Jews.

Except for a period of several years about a decade ago, Netanyahu has been a lifelong public opponent of a Palestinian state. In recent years, he had made pre-election promises to annex parts of the West Bank, which never ended up happening. And under Netanyahu, Israel conducted three major offensives against Hamas in Gaza, including the 2014 Gaza War and the recent fighting in May.

In 2019, Netanyahu was indicted for fraud, bribery and breach of trust — the first time a sitting Israeli prime minister went on criminal trial. The trial sparked a protest movement that demonstrated regularly outside the prime minister’s residence, calling on Netanyahu to resign.

Netanyahu has denied the charges and vowed to fight them. He persisted in office with a shrinking group of allies who proved too few to form a governing coalition. Last month, after considering joining a coalition with Netanyahu, Bennett instead worked with Lapid to assemble a “change government” that would remove Netanyahu from his position.