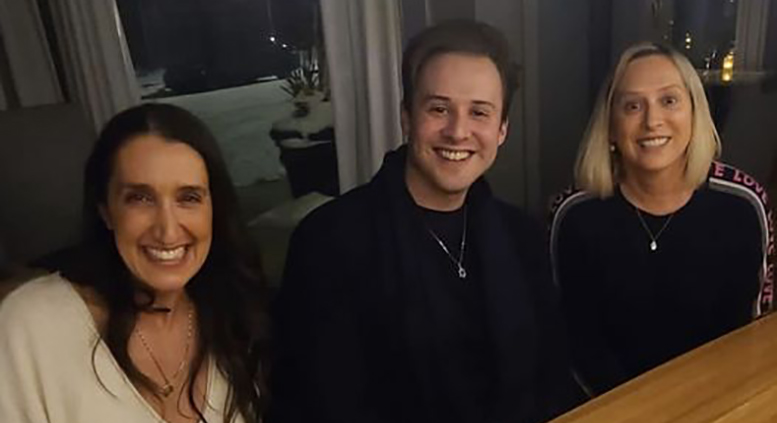 (AJNews) – On November 10th, Ben M. Freeman, a Jewish leader, thinker and educator sat down with Marnie Bondar and Dahlia Libin at the Calgary Public Library to discuss Jewish pride, combatting Jew-hatred and re-centring holocaust awareness. The title of the event was, The Enemy From Within: The Impact of Internalized Racism.

He began the talk by referencing his childhood and how growing up in a small Jewish community shaped his outlook. “There was one Jewish elementary school (but) no Jewish High School,” he explained. Despite that, his parents instilled in him Jewish values. As a gay man, growing up in the shadow of the AIDS epidemic, and when it was still illegal to discuss homosexuality in the UK, he felt shame and guilt. “I learned that LGBTQ+ people were not happy, successful or whole. That is what I internalized (and) these things stay with you. I eventually had to go on a journey to not allow the wider world to tell me what it meant to be gay.”

This form of self-discovery also converged with his Judaism and Jewish expression. He always wanted to be considered the palatable or “Good Jew” by the outside world for fear of sticking out. “I used to say, I’m Jewish but…(or) I’m a Zionist but,” he noted. What ultimately gave him strength was to reject how non-Jews define Jews. “The wider world feels comfortable telling us what we are…and we accept it. We conform, but the world we are trying to live in (in the West) was partially built in opposition to Jews.”

Freeman broke down Jewish self-hatred into the three D’s: Diminishment, denial and deployment. “Diminishment is making our Jewishness smaller. We are told if we stand up for ourselves, we are not for universal values. So we diminish ourselves and it’s a survival technique that never works out. We deny our Jewishness since we can easily reject our faith today. And finally, when Jews deploy their faith as a weapon. It’s not enough for Jews to state, I’m an anti-Zionist. They have to spend the rest of life demonizing the rest of the Jewish community. Before, the path of redemption was Christ. Today in a leftist context it is the path of anti-Zionism. If I just disavow Israel more intensely, if I conform more, then maybe I will be saved.”

Freeman reverted to his original point when asked what the solution for internalized hatred both for Jews and non-Jews alike should be. “Pride,” he said. “Pride is not a feeling of saying, I like myself. It is an understanding of your basic integrity as a human being. We are not victims. We are powerful resilient survivors. I, as a Scottish Jew, am in Calgary discussing Jewish identity. It’s a miracle. Even holocaust education (should be filled) with pride. People who were stolen in the holocaust are more than that experience. They were Jews living lives before that monstrosity. We need to build a defence system from all the messages that are constantly bombarding us.” And how can non-Jewish allies help? “Ask and listen with humility,” was Freeman’s response. “You might not understand, but continue to engage (with us).”

People in attendance, both in person and online, were able to ask pre-selected questions by the moderators. From seeking advice on how to engage with politicians regarding the rise of anti-Semitism to criticizing Israel, Freeman responded by making sure Jews as a community were centred in any conversation. “Listen to us…(and) centre us in the conversation. Israel is a country like any other. You should be able to criticize Israeli policy. I’m not happy about it (the election). I’m not happy that there are real homophobes in this administration but I do not doubt Israel’s right to exist. Its right to exist is not rooted in our perception of its morality. Even as Jews, when one wants to criticize Israel, we have to do so responsibly.”

Freeman is on a publicity tour promoting his second book, Reclaiming our Story: The Pursuit of Jewish pride. His third book, as part of a trilogy, will be released in 2024 focusing on Jewish indigeneity.

Be the first to comment on "Ben M. Freeman in Calgary: On combatting internalized racism and focussing on Jewish pride"