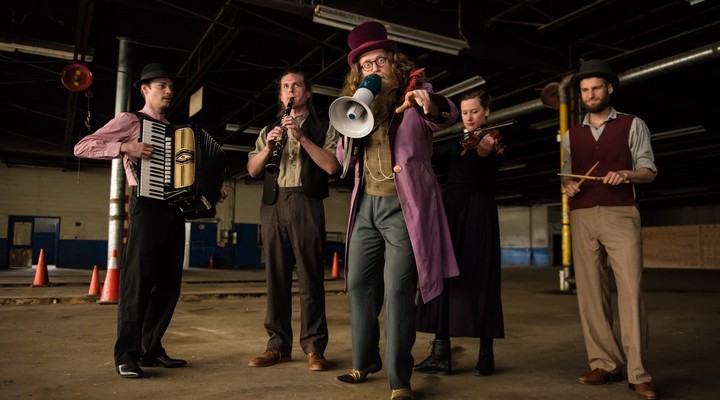 'Old Stock: A refugee love story' is a high energy concert woven together with a humorously dark folktale - on at the Citadel Theatre in Edmonton until May 13. (Photo by Stoo Metz)

(EJNews) – Old Stock: A Refugee Love Story is a masterful off-Broadway production that captures the heart and soul of the Jewish refugee experience to Canada in 1908. It is playing now at the Citadel Theatre, until May 13 and it is a must-see production for any member of our Edmonton Jewish Community – particularly those of Romanian or other Eastern European descent. It is a personal reflection of our own refugee experience, told in poignant and captivating vignettes against a backdrop of wonderful music and incredible musicianship.

Edmontonians should definitely add Old Stock to their list of  ‘must do events’ this week – during National Jewish Heritage Month.

The sensational Ben Caplan is brilliant in the role of the narrator – The Wanderer. He captures the attention of the audience from the moment he emerges at the top of the stage until the close of the show. He sings, he dances, he jokes – he is the Tevya of the production and he is amazing.  He flawlessly performs a wide-reaching diversity of genres from irreverent potty mouth humour to blue grass music to Chasidic dancing to cantorial chanting.  You literally can’t take your eyes off him.

Old Stock is an extraordinary piece of theatre that tells the story of how to love and build a life in a new country after being broken by the horrors of wars. The performances of Dani Oore, who plays Chaim and also the woodwinds, and Mary Fay Coady, who plays Chaya and also the violin, are meticulously nuanced and relatable. It could be my bubbe and zaida or yours.  Their journey is spell-binding.

This is a history lesson for us all and at the same time it is a glimpse at the realities faced by new immigrants today who are seeking refuge in Canada or the United States. Vignettes depict how the refugees were received and portray flashbacks from the lives they left behind.  Bravo to playwright Hannah Moscovitch for bringing her family’s history to the stage and to her magnificent collaboration with Ben Caplan and Christian Barry for creating this cultural masterpiece.

The show is performed at The Club – a small intimate theatre at The Citadel. It is a perfect venue for this production – the audience is immediately transported to a small off-Broadway venue in New York and then thoroughly entertained.

Old Stock is a highly acclaimed 2b theatre company production. It had a recent Off-Broadway run in New York, where the New York Times declared it a critic’s pick. The show was also recently nominated for six Drama Desk awards, including Outstanding Music and Outstanding Book of a Musical. After the Edmonton run, Old Stock will be headed for a European tour and plans are also underway for the release of the musical score.

Old Stock: A Refugee Love Story runs May 9 to 13, 2018 in The Club at the Citadel Theatre. Tickets start at $30 plus fees and gst. For more information or to purchase tickets, call the Box Office at 780.425.1820 or visit www.citadeltheatre.com.

Be the first to comment on "Ben Caplan is brilliant in ‘Old Stock: A Refugee Love Story’ – on at the Citadel until May 13"