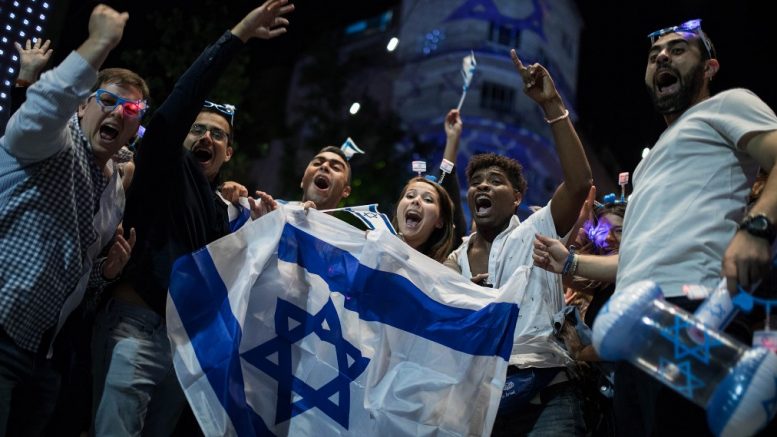 Israelis display their nation’s flag as they revel in Independence Day celebrations, May 8, 2019. (Hadas Parush/Flash90)

TEL AVIV (JTA) — Wednesday night (May 8) was one of the hardest nights on the Israeli calendar. In that hazy space between sunset and nightfall, Israel transitioned from the intense pain of Yom Hazikaron, Memorial Day, to the uninhibited joy of Yom Ha’atzmaut, Independence Day. It’s an evocative, jarring and charged transition.

After a full day or more of listening to names and stories of the dead, watching memorial ceremonies and interrupting “normal” life to stop and stand at attention, suddenly we turn off all that emotion and begin dancing.

The “transition” ceremonies that take place at the end of Yom Hazikaron to usher in Yom Ha’atzmaut all over Israel begin with performances of sad, mournful music, and within an hour, the stage is often filled with glitter and fireworks.

I don’t know of any other country that mourns its veterans and celebrates its existence with quite this orchestrated range of emotion. In fact, it feels both difficult and unnatural to go straight from the hardest grief into the greatest joy within moments of each other. We all sort of nod and move on, going to our barbecues in the packed national parks and pretty much accept that this is how it is.

Some might argue that remembering the losses and celebrating the state’s founding in such quick succession simply means that we do not take life for granted and appreciate the ultimate sacrifice that soldiers have made. But this year, the transition bothers me more than ever.

In this contrived set of public rituals, personal loss is co-opted for the sake of the national narrative. The entire country is recruited to make sure that these losses are framed as heroic, tragic – as well as necessary and unavoidable. Rather than questioning the notion that war and bloodshed are inevitable, we’re asked to accept that these human sacrifices are part of our national fate.

As the uber-right-wing Knesset member Bezalel Smotrich tweeted, “Memorial Day is not for personal mourning. It is a national day and even the bereaved families are not allowed to damage the national character. They have 364 days a year to mourn in their own way, but not on this holy day.” He chillingly frames all this tragic loss of life as fate. Even mourners cannot challenge all this.

The intensity of emotion within this narrative ensures that it will not be questioned. After all, the fear of anti-Semitism, the intergenerational trauma from the Holocaust and the triumph of Exodus all run through our veins – there is no room to question whether the modern state, exactly as it is, should be this way.

In this paradigm, nobody can ever question our own forces, our own actions, our own role in creating violence and pain for others. Israel’s actions, no matter what they are, are always justified. While Israel deserves to celebrate its existence, the way it is couched in this emotional, dramatic, untouchable idealization of personal sacrifice is unsettling to say the least. It turns the day into a political opportunity, laying the groundwork for more violence, preparing us to accept war as inevitable reality now and in the future.

It is hardly surprising that Prime Minister Benjamin Netanyahu used his speech at the national memorial ceremony Wednesday to push his aggressive Iran agenda, saying Israel will do whatever it takes “to make sure Iran does not get nuclear weapons.” It’s the continuation of the scare tactic.  When facing indictment, his response is, “We need to worry about Iran and Syria.” The tightness of this narrative works. It keeps us all frightened, and it keeps power in power.

Gradually, however, there are pockets of people – Jews and Palestinians – who are questioning. Last night, at a joint Israeli-Palestinian memorial ceremony in Tel Aviv, co-moderator Mika Almog told the crowd of 10,000, “War does not have to be our fate.” Everyone who got up to speak – including bereaved families from both sides of the conflict – echoed the same sentiment.

“Mourning knows no boundaries,” co-moderator Samira Sariya said. “We are all human.”

I and many others are ready for a different vision of Israel, one in which we see ourselves as humans first and Jews second, one in which we start to unpack the narrative that we have no choice other than to engage in violent conflict. There are other ways. We have options. But to see other solutions, we have to be willing to unpack and challenge some of the damaging ideas that have engulfed us for too long.

As I write these words, I am getting ready for Yom Ha’atzmaut, with barbecues, fireworks and all, to mark a much-needed holiday and celebration that Israel deserves. But even with that, it’s no longer enough for me to be so ensconced in the Jewish survival story that I don’t see anything else. Jews have to be human beings first, and we need to give thought to others with whom we share this land and this world. Our story does not have to be one of tragedy. It can be one of hope, empathy and humanity.
The views and opinions expressed in this article are those of the author and do not necessarily reflect the views of JTA or its parent company, 70 Faces Media.