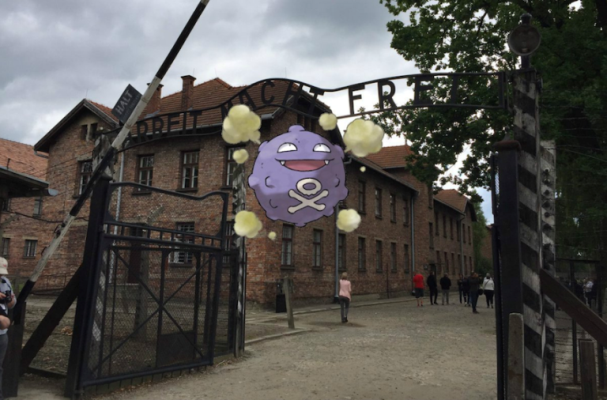 Some users of the new game have found virtual Pokémon at the Auschwitz museum. (Twitter)

(JTA) — The Auschwitz-Birkenau State Museum is not buying into the Pokémon Go craze.

On July 12,2016, the Holocaust memorial site tweeted that it will not allow visitors to play the new smartphone game because it is “disrespectful on many levels.”

New York magazine first reported Tuesday that some users of the Nintendo game, which allows players to capture its animated creatures on their phones at outdoor sites and buildings with the help of phone GPS systems, were playing at Auschwitz.

Others soon took to Twitter to report finding Pokémon at the popular memorial in Oswiecim, Poland, but their screenshots of game activity did not match the normal look of the game. The game has not been officially released in Europe.

On Tuesday, ADL CEO Jonathan Greenblatt went on Twitter to call for the museum’s visitors to refrain from playing.

I visited #Auschwitz today. Its a sacred space. Don’t debase it with a mindless video game https://t.co/KRQK09fvV5pic.twitter.com/Bh750PCKOm

“Playing the game is not appropriate in the museum, which is a memorial to the victims of Nazism,” Andrew Hollinger, the museum’s communications director, told the Post. “We are trying to find out if we can get the museum excluded from the game.”

Since its release last week, Pokémon Go has become the most popular mobile game in U.S. history, with over 20 million daily users. The stock of its parent company, Nintendo, rose 23 percent on Monday.

New York magazine reported that playing the game at other sites — such as Ground Zero in New York City, near a North Carolina statue of a Confederate general and at the site of multiple African-American mural memorials in Brooklyn — has also caused controversy.

The game’s developer, Niantic, ran into similar trouble last year when one of its games, Ingress, allowed players to battle for control over real-life locations that happened to include multiple former concentration camps such as Auschwitz, Dachau and Sachsenhausen.

Although it has yet to be officially released in Israel, multiple people — including Israeli President Reuven Rivlin — posted screenshots from the game in the Jewish state.