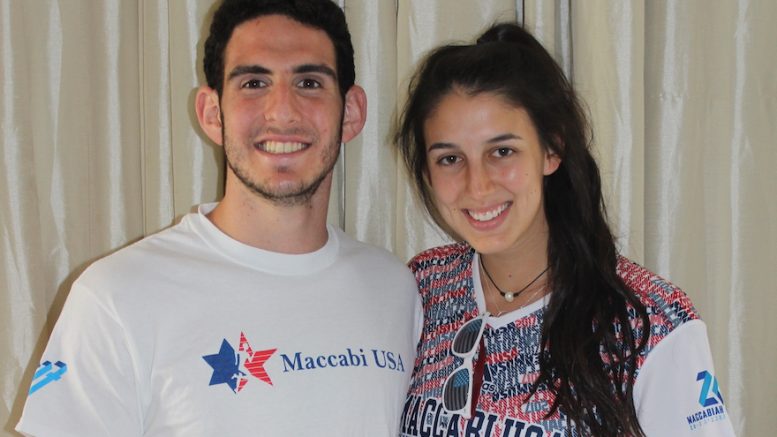 Robbie Feinberg and Hayley Isenberg, Jewish athletes from Harvard, make up one of the many couples participating at the 2017 Maccabiah Games. (Hillel Kuttler)

RAMAT GAN, Israel (JTA) – Danny Janel first noticed Allison Silfen’s smile in July 2013. They were hanging out with other athletes in a hotel room a few evenings after arriving in Israel. He was smitten.

She had already noticed him on the flight over. Half asleep, Silfen creaked open her eyes just as Janel stepped to the rear of the airplane to don tefillin.

“I spotted a good-looking Jewish guy,” Silfen remembered of that first glimpse.

Janel and Silfen had come here to play for the basketball teams representing the United States at the Maccabiah Games, the quadrennial sports competition dating back to 1932. The 20th Maccabiah opened Thursday night in Jerusalem’s Teddy Stadium with a festive procession of approximately 10,000 athletes from 80 nations. It will run through July 18.

Now, four years into a promising relationship and as newly minted college graduates – Janel from Connecticut College, Silfen from Maine’s Bowdoin College – the two New York City-area residents are back to compete in the Maccabiah.

They aren’t the only couple who met at the Games.

Silfen’s coach here, Sherry Levin, said she knows of 10 pairs brought together by the Maccabiah. Levin recalls chairing the 2001 U.S. women’s basketball team when one of her players, Leslie Carlson, met Jordan Schlachter, a member of the men’s team. They married in 2003.

Not all the relationships last, of course. Someone who went out with a guy she met at a Maccabiah? Levin.

Another basketball couple here is Robbie Feinberg and Hayley Isenberg, Maccabiah teammates of Janel and Silfen. They met at Harvard’s freshman orientation for athletes two years ago. Discovering that the other was a Jewish ballplayer sparked a friendship and, eight months later, romance.

“We’ll be able to talk about this forever,” Isenberg said of the two reaching the Maccabiah.

The gold medalist in the Maccabiah romance pantheon is hoopster Todd Schayes, who at the 2001 opening ceremony displayed a placard publicizing his search for an Israeli wife. He didn’t land a native, but an American, Diane Lipner, contacted him. They were married in 2003 and are in Israel now: Todd, a nephew of the late NBA Hall of Famer Dolph Schayes, coaches the American men’s over-45 basketballers; Diane is playing masters-division tennis.

“I truly wanted to find that one special person – and what better way than to mix athletics and Judaism? The Maccabiah and Israel will always be part of the story,” Schayes said of his stunt.

About the Janel-Silfen romance, Schayes said: “I love hearing stories like that. It’s such a wonderful byproduct of the Games.”

Levin says the Maccabiah provides three key elements to foster romance among the participants: sports, Judaism and what for many is their first visit to Israel.

“We’re so open to the fact that we’re all Jewish, and if it’s important for you to meet and date a Jewish man or woman, then what a wonderful event,” said Levin, gesturing toward the 1,100-member American contingent gathered here Tuesday for a raucous, pre-competition booster rally at Maccabi World Union headquarters.

“The shared experience of the Maccabiah Games, and pride in country and heritage, brings everybody together. It’s such an intense experience.”

So much so that Daniel Greyber, who captained the men’s swimming team in 1993, returned to Israel two years later on a work-study program. He met his future wife, Jennifer, on a swimming outing in the Jezreel Valley.

Now the rabbi at Beth El Synagogue in Durham, North Carolina, Greyber is serving as the American delegation’s spiritual leader for the second consecutive quadrennial.

“People are in an environment they excel in and are excited to be in. It’s a confluence of factors that are unique and beautiful,” Greyber said. That is especially so, he said, for those lacking strong Jewish affiliations.

Opportunities abound. Athletes in the four age divisions (junior, open, masters and paralympics) mingle daily in their hotel lobbies, at meals and parties, on the street, at ceremonies, while touring and at the venues where the 47 sports are being contested.

Heading into the Maccabiah, the American delegation experiences Israel Connect, a weeklong schedule of touring and organized discussions on Judaism and Zionism. The bus rides, visits to historical sites, hikes, rest stops, even a group b’nei mitzvah ceremony for those who never had one – this year, said Greyber, more than 200 people took advantage – make starting conversations easy.

For Silfen and Janel in 2013, the opener was far less substantive.

“I don’t have your Snapchat,” Janel said he told Silfen.

At a July 4th party a few days later, he asked her to dance. They sat together at Shabbat services, took walks after dinner, telephoned when their teams toured separately and shared buses on joint trips.

“I was assertive,” Janel acknowledged.

“It was my first time in Israel,” Silfen said. “We spent a lot of time together.”

After the games, and living 200 miles apart, they would see each other every few months. In long telephone calls, they encouraged each other in academics and sports.

“We’re both very goal-driven,” Janel said. “Ali likes to push me a lot. She wants me to be the best I can be.”

“Playing in the Maccabiah Games and meeting Danny has strengthened my ties to Judaism,” said Silfen, who served on the board of Bowdoin’s Hillel. “After being here, I wanted to be connected to my Jewish roots.”

Their Jewish ties could soon deepen. Silfen is considering offers to play professionally in Israel, and Janel would join her if that happens.

“We’re living the moment, enjoying the experience,” she said. “Our future is bright. I’m excited for what comes next.”