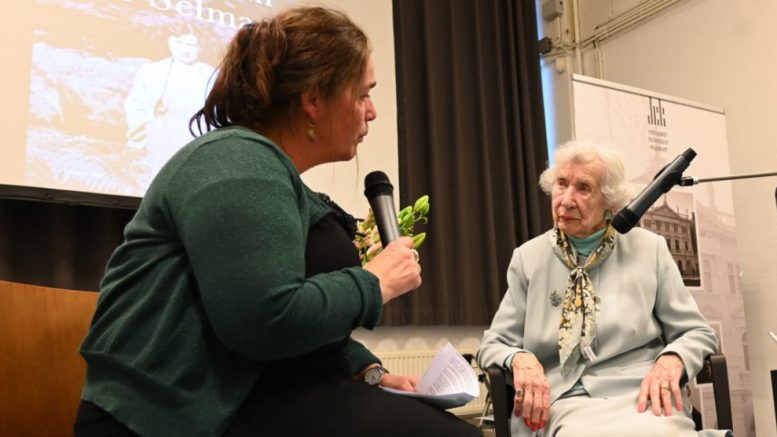 As number of Holocaust survivors dwindles, educators assess the impact of living testimony.

(JTA) — Cancer may have weakened Edward Mosberg’s body, but it has done nothing to dissuade the 94-year-old Holocaust survivor from New Jersey from traveling to his native Poland at least once a year to commemorate the Nazi genocide.

Mossberg has since been declared cancer-free, but he will still travel with a medical team when he heads to Auschwitz for the 75th anniversary of the camp’s liberation by Soviet troops on Jan. 27.

Traveling is also tough on Selma van de Perre, a 97-year-old survivor from Amsterdam who relied on her son and a cane to get around during a recent speaking tour of the Netherlands. Beyond the mobility issue, the speaking part is also taking its toll, she acknowledged.

Nelly Ben-Or, an 86-year-old survivor from Ukraine living in London, has had to cut back recently on the number of talks she gives because of trouble with her hip.

As the number of living Holocaust survivors dwindles, and those who remain confront the inevitable limitations of advancing age, Holocaust educators are being forced to confront a fraught question: What will happen to the teaching of the Holocaust when the firsthand witnesses are gone?

Some believe the field of Holocaust education will be forever changed, and they are working overtime to record and disseminate their accounts on the theory that the power of living testimony is unrivaled when it comes to sensitizing society to the dangers of racism and anti-Semitism.

But others are less concerned, pointing to the existence of a critical mass of recorded testimonies and the absence of a direct correlation between the availability of those accounts and society’s interest in the Holocaust.

“There are fears, especially in some Jewish communities, that the Holocaust would be forgotten when survivors aren’t there, or that its lessons will be more difficult to teach,” said Yves Kugelmann, a Swiss Jewish journalist who sits on the board of the Anne Frank Fonds in Switzerland. “I disagree with that view, though I understand it.”

Kugelmann’s organization has had a leading role in introducing millions of people to Frank’s diary, which became famous due to the efforts of Frank’s father, Otto, and has become a powerful tool for educating about the Holocaust. Kugelmann sees the diary’s continuing success as compelling evidence that the testimonies of people who are no longer alive can be as powerful as the voices of the living.

“The main challenge of Holocaust education is to tell the story in ways that evolve to stay relevant to new generations,” said Kugelmann, whose organization has adapted the diary as a play and a graphic novel, and is working on an animated film.

Adaptations, and in some cases fictional works based on the Holocaust, have proliferated in recent years as the survivor population has declined. It’s a phenomenon arguably traced to Steven Spielberg’s 1993 film “Schindler’s List,” a work of fiction based on historical fact that brought the story of Oskar Schindler’s efforts to save Jews from the Nazis to a large global audience.

An analysis of the IMDB film database suggests that in the years 1945-1990, major feature films were made about the Holocaust at a rate of 1.5 productions per year. That figure jumped to four per year in the three decades that followed.

“The popularity of such novels and films has arguably led to the marked increase in both the number of museums dedicated to the Holocaust and in the number of visitors to them,” Sophia Francesca Marshman wrote in her 2005 doctoral thesis for the University of Portsmouth.

But that growth is not an unvarnished success story and often comes at the expense of historical accuracy — a development that to some only underscores the significance of firsthand testimonies.

Films like “Life is Beautiful,” Roberto Benigni’s 1999 Academy Award winner about a father who convinces his son that life in a concentration camp is an elaborate role-playing game, have “generated interest in the Holocaust, but were so wildly unhistorical that they also serve to blur people’s perceptions about it,” said Rabbi Avraham Krieger, the director of Israel’s Shem Olam Holocaust Institute for Education, Documentation and Research.

Other mass market Holocaust productions further illustrate the problem. Quentin Tarantino’s “Inglourious Basterds” from 2009 is a revenge fantasy in which the leadership of Nazi Germany is assassinated. “Phoenix,” a fictional German production from 2015, is based on a far-fetched plot about a survivor who returns to her prewar life undercover thanks to face-altering surgery.

Krieger doesn’t like such representations, though he understands their appeal. Organizations that collect Holocaust survivor testimonies typically direct their subjects to stick to the facts and limit their emotions, he says, which is the most interesting part to Hollywood filmmakers, who in turn begin to take liberties with the historical record.

“That’s when the problem of accuracy begins,” said Krieger, whose organization has developed an alternate testimonial format that encourages survivors to “reconstruct [their] emotional world.”

The Claims Conference, a body representing world Jewry in compensation talks with Germany and other countries, has funded artistic projects that it deems sufficiently grounded in historical fact to be educational. One of them, “The Son of Saul,” was based in part on witness testimonies and won an Oscar in 2016.

“With enough attention to historical accuracy, you can make a fictional film with a broad appeal that will still represent truthfully the reality of the Holocaust,” Greg Schneider, the Claims Conference’s executive vice president, told JTA.

Other organizations have focused on upgrading the experience of viewing archived testimonies. The Dallas Holocaust and Human Rights Museum has produced 3-D recordings of interviews that permit audiences to engage in limited interaction with holograms of survivors who may no longer be alive.

Still, it’s hard to underestimate the power of personal encounters with Holocaust survivors.

Tessa Roy’s encounter with Rae Gawendo, a survivor from Lithuania who died in 2018 at the age of 103, “changed my life,” Roy told the Hartford Courant in 2017. Roy, who heard Gawendo speak as a junior high school student, was inspired to become a journalist. She now reports for WPRO Radio in Connecticut, focusing on education and human rights.

“Losing survivors is a tremendous challenge for Holocaust education,” Schneider said. “Nothing is more impactful than sitting with a person, eye to eye, holding their hand and hearing their story.”

Be the first to comment on "As number of Holocaust survivors dwindles, educators assess the impact of living testimony"