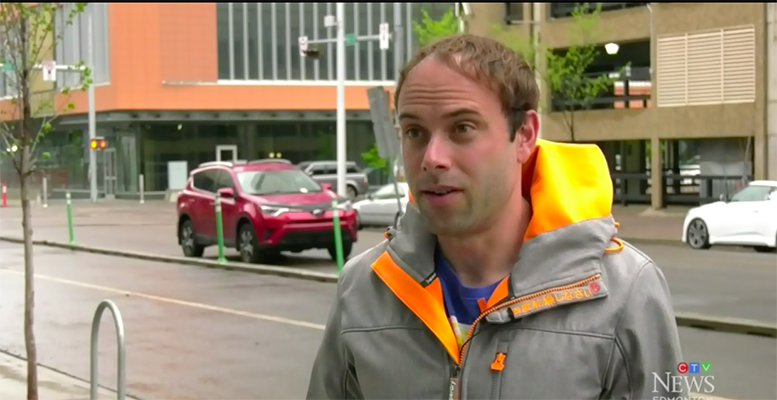 (AJNews) – Violence has been escalating between Israel and Hamas since May 10 with thousands of rockets fired from Gaza into Israel and targeted air strikes into Gaza from Israel. Civil unrest is also evident on the streets of Israel in once peaceful communities where Arabs and Jews live side by side.

Tensions are also rising around the world on social media and at rallies, in solidarity with both sides. In Edmonton, a peaceful Palestinian Solidarity car rally was held on May 15 but on May 16 several young men were seen driving a vehicle in West Edmonton neighbourhoods shouting ‘Free Palestine’ and then yelling ‘Are there any Jews here?’

Community member Adam Zepp told media that he was walking down his parents’ driveway Sunday night at around 9 p.m. when a car drove by. Several young men inside yelled: ‘Free Palestine,’ he said. The car then looped around the cul de sac and when they drove by the second time, they yelled out ‘Are there any Jews here? Any Jews live here? Where do the Jews live?’

Zepp said that his mother, whose parents were Holocaust survivors yelled back ‘No’ and the car drove away. “I was dumbstruck to hear something like that in Edmonton in 2021. It was shocking to me and saddening,” he said.

Zepp doesn’t know if they were just making noise or if they were looking to do something more nefarious. But he seriously thinks that people should calm down and take a breath before spreading hate on the streets or on social media. “We should be able to disagree without spreading hatred,” he said.

“Canada is a multi-cultural society. There are going to be diverse people, diverse religions, diverse opinions, and I think that’s great. But when you have this type of rhetoric that just targets hate towards a particular group, that’s not OK.”

Zepp says that he did not tell the men that he was Jewish but he can’t help but wonder what might have happened if he had. How sad is it that in 2021, a grandson of Holocaust survivors has to hide his Judaism in Edmonton.

In choosing not to engage, Zepp did the right thing, according to the Jewish Federation of Edmonton. He reported the incident to Federation, and he called the police.

On May 17, Jewish Federation CEO Stacey Leavitt-Wright and President Steve Shafir issued a Security Alert to the community, stating, “On the evening of May 16 there were some incidents in the west end involving a vehicle driving through the neighborhood ‘seeking Jews,’ confronting people and making threats.

“Edmonton Police Service and RCMP have been informed and are investigating. We are working with the EPS and they have confirmed that there will be increased police presence in the area to continue to ensure our security and safety. Additionally, the Jewish Federation has commissioned further security to patrol the area.

“Incidents like this are occurring in many Canadian cities. We take this matter very seriously and are appreciative of the swift response of our law enforcement partners.”

Police Chief Dale McFee stated that EPS has called on its Hate Crimes and Violent Extremism Unit to investigate after “two homes were approached, and anti-Semitic rhetoric was used.”

“At this time, it is unknown if these incidents are related to the rallies for Palestine that occurred around Edmonton this weekend,” he added.

“The EPS denounces any and all acts of hate; incidents such as these have no place in our city, and we do not tolerate acts of intimidation or violence. We understand these acts create feelings of fear within our communities, and as an organization, we are committed to keeping people safe, and fostering a sense of safety for all Edmontonians.”

Leavitt-Wright and Shafir said they “appreciate the restraint our community has shown over the past week. We urge you not to engage should you encounter any similar situations.

“In the event of an emergency or if you are witnessing suspicious activity, please call 911. For all non-emergency reporting please email our Director of Security, Tal Toubiana, at talt@edjfed.org.”