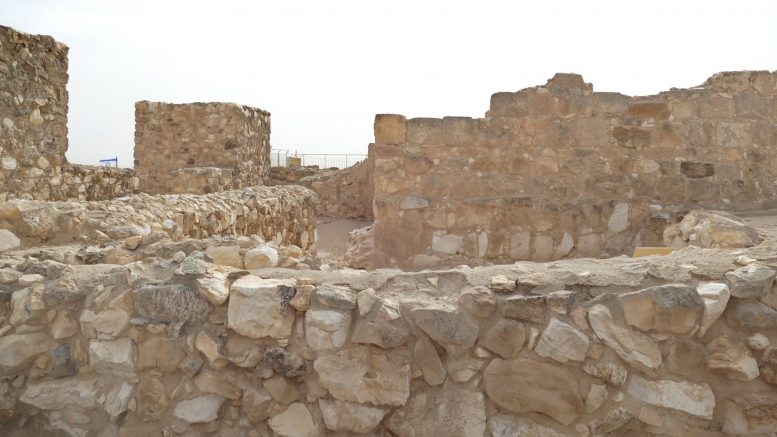 Tel Arad in the eastern Negev Desert, which includes a fortress built by the king of Judah around the eighth century BCE, (Shaula Haitner/Pikiwiki Israel)

By Marcy Oster, JERUSALEM (JTA) — The ancient Israelites burned cannabis on their altars during religious rituals, researchers have found.

Israeli archaeologists found a mixture of cannabis and animal dung in the residue found on a 2,700-year-old altar discovered in a temple at Tel Arad in the Negev.

It is the first evidence of the use of a mind-altering substance to bring worshippers to a state of ecstasy in Judaism, according to a study published Thursday in Tel Aviv, the academic journal of Tel Aviv University’s Institute of Archaeology.

The Arad shrine was first unearthed some 50 years ago, and the material found on the altar, one of two discovered at the site, was submitted for analysis at the time, with inconclusive results. New analysis in recent years led to the determination that the material on the smaller altar contained cannabidiol (CBD) and tetrahydrocannabinol (THC).

The study was conducted by Eran Arie of The Israel Museum in Jerusalem, independent researcher Baruch Rosen and Dvory Namdar of the Volcani Institute. They note in their conclusions that the discovery of cannabis on the altar, which is housed at The Israel Museum, was a “surprise.”

The researchers do not believe the cannabis was used because of its fragrance, according to their study.

“It seems feasible to suggest that the use of cannabis on the Arad altar had a deliberate psychoactive role. Cannabis odors are not appealing, and do not justify bringing the inflorescences from afar,” they wrote.

The researchers also imply that such mind-altering drugs could have been used in the Temple in Jerusalem.

“The presence of cannabis at Arad testifies to the use of mind-altering substances as part of cultic rituals in Judah,” they wrote. “The plants detected in this study can serve as an extra-biblical source in identifying the incense used in cultic practices not only at Arad but also those elsewhere in Judah, including Jerusalem.”

Be the first to comment on "Ancient Israelites burned cannabis, researchers find"