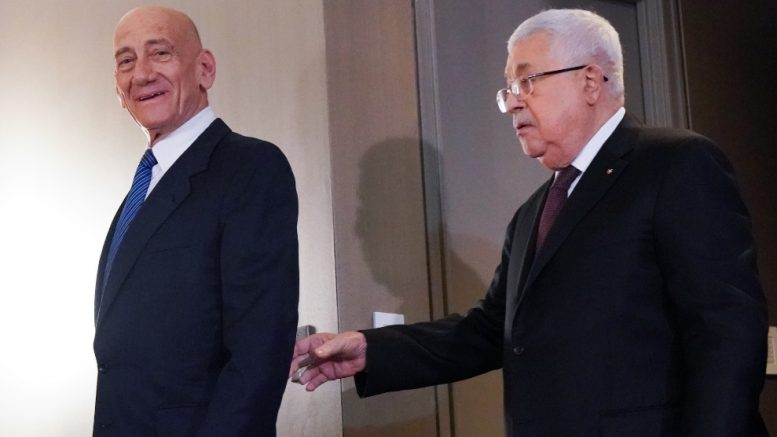 Former Israeli Prime Minister Ehud Olmert served 16 months in prison for bribery and fraud in a corruption scandal that ended his political career more than a decade ago.

Yet there they were on Tuesday at a Midtown Manhattan hotel reaffirming their commitment to resolving the Israeli-Palestinian conflict along lines that until recently were broadly endorsed by the international community.

Abbas was fresh off an appearance that morning at the United Nations, where he categorically rejected President Donald Trump’s vision for Middle East peace — one that effectively condones the Israeli annexation of large portions of the West Bank. Speaking to the world body, Abbas said the plan “leaves Palestine fragmented” and “will end all basis for a peace plan.”

At the news conference, Abbas said he was fully prepared to resume peace negotiations — on Olmert’s terms.

“I’m fully ready to resume negotiations where we left it with you, Mr. Olmert,” Abbas said, as if that were an actual option. “And not on the basis of the plan of annexation and legalizing settlements and destroying the two-state solution. This pushes the region and its people further and further into the cycle of violence and chaos, something — I want to reiterate again — we are against. We don’t want violence.”

Abbas and Olmert reportedly made significant progress toward a peace agreement when Olmert was in power from 2006 to 2009. Both spoke with nostalgia of those years, referring to each other as “a man of peace.”

But in the end, Abbas declined a proposal Olmert offered in 2008. Soon afterward, facing indictment in his corruption case, Olmert resigned. The following year, Benjamin Netanyahu became the prime minister and has been serving since in the office. Olmert has not held any elected office since his release from prison in 2017. (Under Israeli law, he is ineligible to hold public office until 2024.)

Olmert was careful not to criticize Trump or the peace plan, though he said the Palestinians would have gotten a state with far more expansive borders under his 2008 proposal along with a capital in eastern Jerusalem. But he tried to put a positive spin on the Trump proposal.

“I think the Trump plan repeats again one basic principle, which is, I think, a starting point for everything, and this is the two-state solution,” Olmert said. “I think that this is something that must be further pursued in order to establish the necessary framework for negotiations.”

Olmert acknowledged that Netanyahu and Abbas probably would not sit down together to negotiate, given their acrimonious history. But he added that Netanyahu may not be Israel’s prime minister following elections in three weeks.

Both Netanyahu and his chief rival, Benny Gantz, have praised the Trump plan.

Later he said: “Now the prime minister is Netanyahu. A month from now, I don’t know.”

Both Olmert and Abbas said that they have stayed in close touch over the past decade. Olmert also claimed that most Israelis agreed with his views on the conflict.

So does all of that presage a political comeback for the 74-year-old Olmert (when he becomes eligible to hold office)?