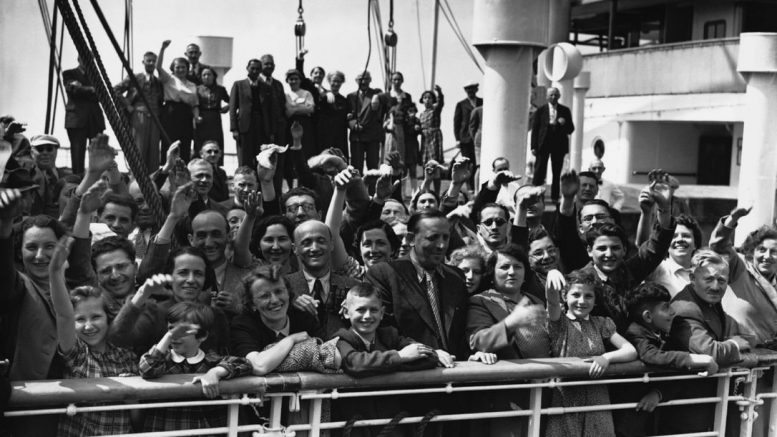 (B’nai Brith Canada) – On Wednesday November 7, Prime Minister Justin Trudeau will apologize to the Jewish community for the MS St. Louis, when Canada refused an ocean liner carrying more than 900 Jewish refugees attempting to flee Nazi persecution. Over a quarter of them subsequently perished.

Members of the Jewish community from throughout Canada will be in attendance at the House of Commons for this historic occasion.

In an editorial published Monday in the National Post (reproduced below), I argue that while an apology can be meaningful, it must include committed and concerted action on the part of government to combat the rising tides of antisemitism today.

While the Jewish people have enjoyed a long and meaningful history in Canada, we have not always been welcome in this country — especially in our darkest hour. In the days leading up to the Second World War, more than 900 Jewish refugees aboard the MS St. Louis were given a rare opportunity to find safe harbour in Canada — but were ultimately refused. Over a quarter of them subsequently perished at the hands of the Nazis.

Even after the Holocaust, discrimination against Jews continued with quotas in academia, restrictive covenants against the purchase of land and common exclusion from various public and private forums, all examples of ingrained societal antisemitism in Canada. My father still vividly recalls seeing signs that appeared on Canadian beachfronts, screaming, “No dogs or Jews allowed.”

Today, Jews remain the most-targeted religious community for hate crimes in Canada. Across the country, from Kamloops to St. John’s, members of our community continue to be subjected to antisemitic harassment, violence and vandalism, a perennial reminder that, after all this time, many still view us as “the other.”

The recent massacre in a synagogue in Pittsburgh serves as a deadly testament to this fact. The Jewish community has much too frequently been the victim of terror attacks, in Israel and elsewhere.

On Wednesday, Prime Minister Justin Trudeau will apologize for the MS St. Louis. While the past cannot be changed, a sincere apology could be meaningful if Trudeau not only recognizes the widespread antisemitism of Canada’s past but also speaks to how our government plans to deal with antisemitism today.

We will never forget the past, and apologies most certainly will not heal all wounds, but honest tshuva — Hebrew for repentance or making amends — could allow us to move forward in a fruitful direction.

The Prime Minister’s apology to the Jewish community should therefore include a clear path forward on what will be done to deter and punish those who embrace or encourage antisemitism. It must also contain meaningful steps to educate Canadians, particularly our youth, on the lessons of the Holocaust and their relevance to today’s turbulent times.

In terms of the past, we need to hear an apology for the institutional antisemitism that was pervasive in Canadian society at the time of the MS St. Louis debacle. I hope Trudeau does not overlook Canada’s shameful participation in the Evian Conference of 1938, when U.S. President Franklin D. Roosevelt convened an international gathering to discuss the plight of Jews trying to escape the Third Reich. Despite the conference, Canada cold-heartedly refused to accept even a single Jewish person.

In contrast to Jewish refugees, Canada welcomed Nazis to our country by the boatload in the 1950s, often failing to prosecute or deport war criminals. Helmut Oberlander is the last known living Nazi in Canada. That is why B’nai Brith Canada officially intervened in the most recent legal action against him. And yet, as I am writing this piece, and despite having his citizenship revoked in court, he somehow remains in Canada. In 1985, the federal government created the Deschenes Commission to investigate whether Canada had become a haven for Nazi war criminals. The report has never been released in its entirety. Why the delay and what information is being withheld from the public?

B’nai Brith’s own 2017 Annual Audit of Antisemitic Incidents registered 1,752 antisemitic incidents consisting of harassment, vandalism or violence — a record high since our League for Human Rights began tracking the phenomenon in 1982. Antisemitism today emanates from the extreme left, extreme right, radical Islamists, certain Christian denominations, atheists and many other sectors of society.

Canada can take specific and necessary actions to combat this growing trend:

On Wednesday, Canada has a historic opportunity to do more than merely apologize for the MS St. Louis. The Jewish community needs committed and concerted action on the part of government to combat the rising tides of antisemitism so that, hopefully, there will be no need for apologies in the future.

Be the first to comment on "An Apology is Nice, but Canada Needs a Real Plan to Fight Antisemitism"