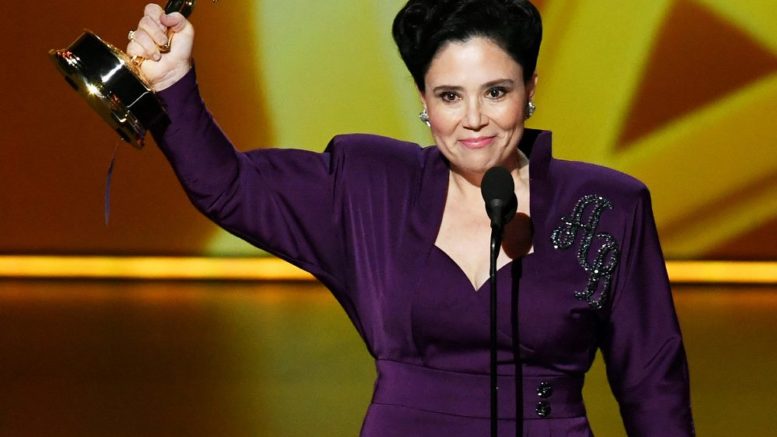 SHORT HILLS, N.J. (JTA) — Whether you watched the Emmys on Sunday night or or not, chances are you’ve been privy since the broadcast to what was likely the Jewiest moment of the show: Alex Borstein’s acceptance speech for her award as best supporting actress in a comedy.

Borstein, who won for the second straight year for playing Susie the manager in Amazon’s “The Marvelous Mrs. Maisel,” started with a series of gags. Turning serious, she told the crowd that she came from a family of immigrants and Holocaust survivors, then elaborated on the circumstances of her grandmother’s survival.

“My grandmother was in line to be shot into a pit,” Borstein said emotionally at the podium. “She said, ‘what happens if I step out of line?’ [The guard] said, ‘I don’t have the heart to shoot you but somebody will,’ and she stepped out of line. For that, I am here and my children are here.”

The initial response to the speech was remarkably positive, both in real life and on the internet, and “Step out of line” posts flooded social media. Entertainment Weekly called Borstein’s speech “hilarious-turned-powerful,” and Esquire’s Justin Kirkland opined that the acceptance speech was “an especially powerful message considering her show features so many powerful Jewish women characters,” and that Borstein’s “incredible anecdote of resilience and strength was among the night’s most incredible moments.”

But as with everything in our now pejoratively labeled “cancel culture,” many keyboard warriors took to their iPhones and asserted that maybe Borstein’s speech wasn’t so great after all.

Many deemed it wrong for Borstein to, as they saw it, equate feminism with surviving the Holocaust.

“Did Alex Borstein just compare women in general to Holocaust survivors with her, “ladies step out of line” comment? And if she did suggest some kind of equivalency, then who do you think by implication get nominated for the role of Nazi guards? And you just let it go?” one person tweeted at Ron Kampeas, the Jewish Telegraphic Agency’s Washington bureau chief.

But the main point of contention for many was that they heard Borstein’s praise for her grandmother’s behavior in stepping out of line as implicitly conferring blame on those who didn’t “step out of line” and were, instead, murdered.

One Twitter user wrote that “it’s deeply ahistorical and victim-blaming to suggest a spark of individual courage would save someone from the nazis.”

“Some [people]l I know (including my wife, daughter of a survivor) found it at best eye-roll worthy, if not offensive. Her grandmother was lucky. Most others who did or would have tried the same would have been killed on the spot. Her story reinforces a narrative of ‘if only they had just resisted a little more …’” Josh Feigelson wrote on renowned Holocaust historian Deborah Lipstadt’s Facebook page in a discussion of the speech.

Rabbi Danya Ruttenberg tweeted, “A lot of the people who stepped out of line in the Holocaust were murdered. Sometimes the ones who didn’t were the ones who made it out. They were all brave. Just — it’s important to put a powerful story in context of the larger system of brutality in effect.”

Rabbi Jill Jacobs agreed: “Yeah, I found that line problematic. Virtually no victims had anything they could have done to save themselves. And those who survived generally took chances without knowing that it would work out.”

Surely the idea that if everyone had only “stepped out of line,” the Holocaust wouldn’t have happened, is odious — but it’s also not at all what Borstein intended to convey.

To this Borstein fan, it’s clear that she meant to pay tribute to her grandmother for surviving, and to express gratitude that she herself and her children even existed at all, thanks to that woman’s defiance. In her moment of success, she took time to look back at the woman who brought her there.

The problematic element of the anecdote, of course, lies in all the people who aren’t in it: the thousands of dead and nearly dead souls, writhing naked under piles of corpses in the pits dug by the execution squads.

Did Borstein’s applause for her grandmother’s act convey disapproval, or even condemnation, of those who didn’t step out of line? Her detractors would say yes. I think that’s ridiculous.

Just as the purpose of telling the story lies within its particular significance for Borstein herself, I’d argue that it is equally important to look at the story Borstein tells with her everyday life. In making that argument, I turn to social media not as my jury — the role it usually plays in our society — but rather as my evidence.

I’ve admired Borstein’s comedic and acting chops for years only from afar (I’m funny, but her agent has yet to return my phone calls). But thanks to Instagram and Twitter, I’ve been able to admire her even more — not as a celebrity, but rather as a proud and outspoken Jewish parent.

In 2019, being a proud and an outspoken Jew is nothing to be taken for granted. We live in a time when white nationalists are emerging from under their rocks and spewing hatred — and sometimes bullets — all too freely. So many people, celebrities and not, either don’t acknowledge their heritage or hide it under a bushel.

Borstein, in contrast, steps out of that line, if you will, to live her Jewishness out loud. She posts her Shabbat candles — complete with Shabbat tray in English and Hebrew — and challah on a Friday afternoon with the caption “Shabbat shalom.”

She posts a pic of her dad’s coffee mug, which reads “The Greatest Grandpa” in Hebrew. She posts a selfie celebrating her Emmy nomination with pastrami, Dr. Brown’s and pickles at Katz’s Deli: “This is how a Jewish gangster celebrates.”

I’ll be honest: I just love Alex Borstein. By telling that story at the Emmys, she was living her own story the same way she lives her Jewish life: loud and proud. And that’s something I wish more of us did, right here and right now.
The views and opinions expressed in this article are those of the author and do not necessarily reflect the views of JTA or its parent company, 70 Faces Media.