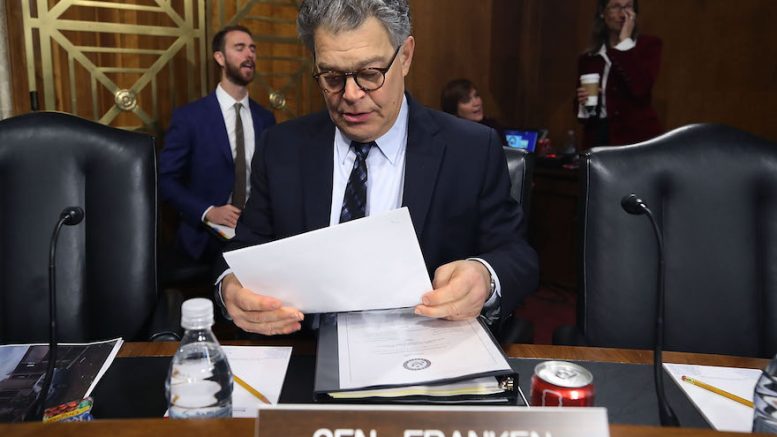 (JTA) — It’s a shame Al Franken has to go, Minnesota Jews say. But he has to go.

That’s the feeling Minnesota Jewish leaders expressed a day after the Democratic senator announced he would resign his seat in the coming weeks following a string of sexual harassment allegations against him. Eight women have accused Franken of inappropriate conduct, and many of his Democratic colleagues called on him to step down. Franken denies some of the allegations.

“Minnesotans deserve a senator who can focus with all her energy on addressing the issues they face every day,” Franken, who is Jewish, said in a speech on the Senate floor Thursday. “I know in my heart that nothing I have done as a senator, nothing, has brought dishonor on this institution.”

Jewish political activists in Minnesota and beyond told JTA that they have fond memories of the senator, whom they described as an advocate for their agenda and a patron of the local Jewish community. But several said he was making the right choice by resigning.

“I think Senator Franken has been a really effective senator,” said Carin Mrotz, executive director of Jewish Community Action, a liberal Jewish Minnesota activist group. “It was hard to lose him from the Senate, and it’s also what needed to happen. I think that in resigning he has an opportunity to say this is a culture that’s toxic, and he wants to be part of that change rather than part of the problem.”

Franken was elected to the Senate in 2008 following a career as a comedian, actor and liberal political author and activist. He won re-election comfortably in 2014 and rose in national prominence this year for his aggressive questioning of President Donald Trump’s executive appointees.

As a senator, Franken was a friend to Jewish communal priorities, his Jewish constituents said. He supported parochial Jewish issues like safeguarding Israel’s security, as well as domestic policies favored by communal institutions, like expanding access to health care and social services.

At times he disagreed with legacy Jewish groups, notably in his support for the agreement curbing Iran’s nuclear program that most large Jewish groups opposed. But Steve Hunegs, executive director of the local Jewish Community Relations Council, said Franken remained friendly despite that conflict.

In his personal life, Franken was not just Jewish but “Jewy” — that is, highly identified if not personally religious. He grew up in St. Louis Park, a Minneapolis suburb with a large Jewish population that served as the setting for the Coen Brothers’ film “A Serious Man.” In his recent memoir, “Al Franken: Giant of the Senate,” Franken recalls learning moral lessons from his childhood rabbi at the Reform Temple Israel.

“We had the Holocaust pounded into our heads,” he told JTA in June. “That was our first lesson in justice. Our rabbi, Rabbi [Max] Shapiro, would say, ‘It’s not enough to be for justice. You have to do justice.’ I think he was quoting Hillel.”

Franken also brought out his Jewishness in his comedy. As one of the original writers on “Saturday Night Live,” he co-wrote, with his writing partner Tom Davis, a skit in which a mohel performs a circumcision in the backseat of a car in order to test its suspension. And his signature character, the feckless, unlicensed therapist Stuart Smalley, channeled stereotypical Jewish neuroses.

As a lawmaker, Franken remained Jewishly affiliated, attending Temple Israel for High Holidays services and speaking there at a 2011 dinner to honor former Vice President Walter Mondale, a fellow Minnesota Democrat. He also sits on the council of the U.S. Holocaust Memorial Museum.

“There was a great pride in having another Jewish senator in that seat,” said Marcia Zimmerman, Temple Israel’s current senior rabbi, referring to the Jewish senators who preceded Franken in his position. “We were quite proud of his position and what he has done as a senator.”

Not everyone was happy with Franken’s performance.

Mark Miller, who chairs the local chapter of the Republican Jewish Coalition, portrayed Franken as an ineffective senator and moral disgrace. Miller disliked Franken’s support for abortion rights and opposition to conservative judges.

“He was a complete hypocrite,” Miller told JTA, stressing that he was speaking only for himself and not for the Republican Jewish Coalition. “When the Weinstein allegations came out, I remember Franken saying how terrible it is, and then these allegations came out and he had to resign. The guy was a disaster. Good riddance.”

Revelations about the Hollywood mogul Harvey Weinstein’s treatment of women set in motion a series of accusation of sexual harassment and assault by high-powered men. Weinstein is under investigation in New York, Los Angeles and the United Kingdom after 80 women came forward with allegations of harassment, abuse, unwanted advances, retaliation and rape.

Some of Franken’s liberal Jewish supporters agree with Miller on one point: Franken was right to resign. Even though they appreciated his work in the Senate, they said that by facing the consequences of his actions, he set a good example for the wave of men accused of sexual assault in politics and beyond.

“There’s a loss of his voice, but the resignation is an expression that no one is above that accountability,” said Rabbi Rick Jacobs, president of the Union for Reform Judaism. “We will miss that voice, but we understand and affirm his courage to resign and set an example for all others.”