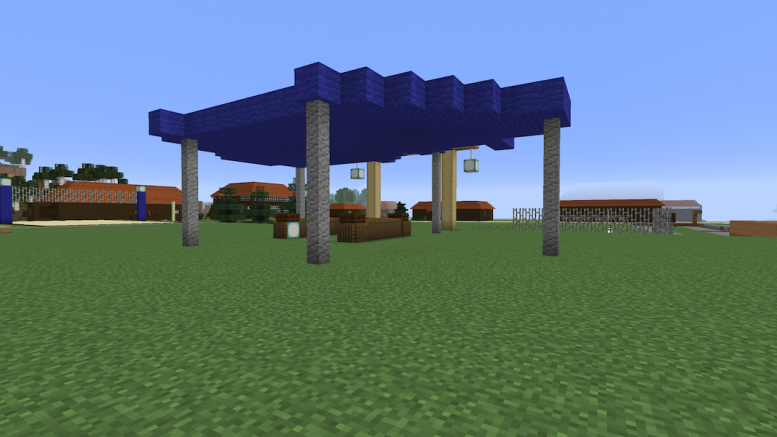 A shot of the campus of Camp Ramah in Ontario, Canada re-created on Minecraft. (Courtesy of Jake Offenheim)

(JTA) — This was going to be Jake Offenheim’s 14th straight summer at Camp Ramah in Ontario, Canada.  Then camp was canceled because of the coronavirus pandemic.

Offenheim, who was set to be a counselor for the fifth year, couldn’t bear a summer without Ramah — so he re-created it on Minecraft.

In the popular “sandbox” video game, users not only can play as characters but can construct entire worlds to their fancy, with no spatial limits. Offenheim, 22, loved the game as a middle schooler and has jumped back in during this era of social distancing.

With time on his hands, he programmed the entire campus of Camp Ramah in Canada on Minecraft, from the cabins to the sports fields to the lake. It took 73 hours in total.

“One of my main goals was to be as faithful as possible to the real thing,” Offenheim said. “People are blown away by how close I got. Even the distances are pretty accurate.”

Many camps have transitioned from in-person to virtual, which usually means activities and programs held via Zoom. Offenheim, however, has created a virtual copy of his actual camp. He downloaded a suite of tools for Minecraft on his computer, fashioned a re-creation of one cabin, then copied and pasted it across camp, changing the shape as necessary. The interiors were made from memory.

To get the proper distances between buildings, as well as the shapes of certain fields, he relied on satellite photos. Oppenheim was able to fill spaces with (virtual) grass, dirt and gravel as necessary.

A YouTube video providing an overview of the landscape shows docks, wooden buildings with red roofs, plenty of grass and trees, cabins, a dining hall and a communal prayer space.

“There’s no oddly shaped buildings,” he said. “They’re all rectangles. There’s one building that was an octagon. You just start placing blocks and see what feels good.”

He’ll be inviting campers to enjoy the virtual world he built.

Offenheim was going to be “Rosh Canoe,” or head of the camp’s canoeing program, this year. Now he’s going to be “Rosh Gaming and ESports.” For three weeks, he will lead campers, divided by age group, in free games on the Ramah in Canada Minecraft platform.

Games will include virtual horse racing, canoe racing, archery and the like. Campers can also compete in virtual parkour.

Campers will need an approved user name to log on to the space, so trolls will be locked out. And Offenheim is taking precautions to protect his virtual world from even invited users.

“We’re going to set up a lock on all of the things that I built,” he said. “So you can’t break or place anything in certain areas, so nobody accidentally breaks something or burns down the whole camp.”