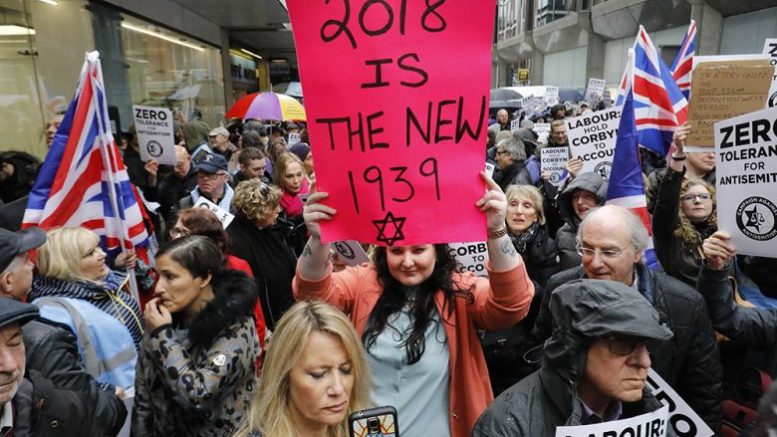 People hold up placards at a demonstration organized by the Campaign Against Anti-Semitism outside the head office of the British Labour Party in central London on April 8, 2018.Tolga Akmen/AFP/Getty Images (reprinted from National Post)

(Nationalpost.com) – The first time I encountered anti-Semitism, I was doing something I loved: attending an NHL game. As an eight-year-old child of Holocaust survivors, my knowledge of anti-Semitism was perhaps similar to the experience of many children of refugees today, for whom the previous generation’s trials in a distant land seem far removed from Canada. The abstract became real when pennies were thrown at me and my brother, each of us wearing a kippah, as we walked down the aisle to our seats.

My parents had every reason to see themselves as victims. But they never did. And they raised their children to reject the mantle of victimhood, notwithstanding the occasional anti-Semitic taunt. They understood that, as I would later discover in my career in Jewish advocacy, most Canadians reject anti-Semitism.

For every ignorant remark I have encountered over the years, I have heard many more reflecting admiration for the Jewish community, Jewish values, and the State of Israel. My personal experience is confirmed by polls that consistently find most Canadians disagree with anti-Semitic tropes and have a positive view of Jews. This is one reason the Jewish community has not allowed the wounds of our past to form a chip on our collective shoulder toward our neighbours.

And yet, I cannot ignore that my own children, two generations removed from the ashes of Auschwitz, are witnessing a global rise in anti-Semitism in their lifetime. While enjoying relative security in Canada, the Jewish community here has watched events in Europe with growing alarm.

A quick comparison of recent data tells us a French Jew is 13 times more likely than a Canadian Jew to be the victim of a physical assault motivated by anti-Semitism. A Swedish Jew is roughly 20 times more likely to experience a hate crime. Polling in Romania and Lithuania shows nearly one in four respondents would not accept Jews as fellow citizens. And, in the U.K., nearly four in 10 Jews would “seriously consider” leaving the country under a government led by Jeremy Corbyn, who has done more than perhaps anyone to demonstrate that anti-Zionism really is anti-Semitism.