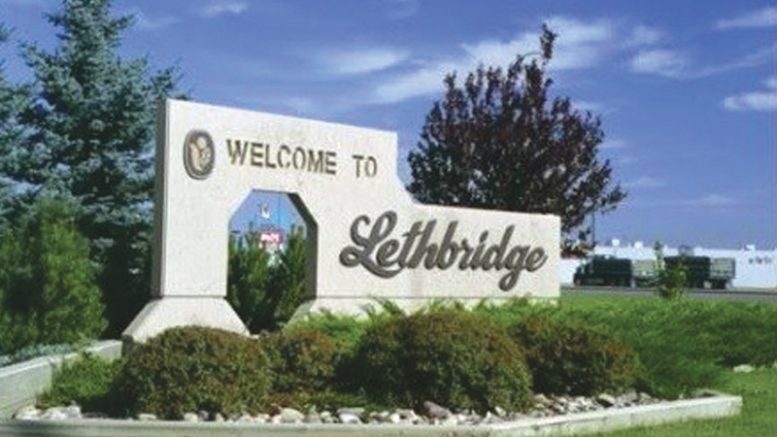 (AJNews) – The first Jewish family arrived in Lethbridge in 1905, according to the Lethbridge Historical Society. Harris Goodman, who came from the U.K., moved with his family in 1904 to Medicine Hat and then High River before settling in Lethbridge.

Like many Jewish immigrants, the Goodmans owned a tailor shop. Harris himself built the shop’s brick building on Third Avenue South, with the family residing on the second floor.

The now-defunct Lethbridge Hebrew Congregation was founded in 1911, with 19 men listed as members. But it wasn’t a brick-and-mortar shul, nor did it have a rabbi. Its local leadership rented halls for holidays and services and brought rabbis from out of town, according to the book Land of Promise: The Jewish Experience in Southern Alberta.

A 1913 photo of a Lethbridge Purim party shows about 60 people in attendance, which the book notes was probably close to the city’s entire Jewish population. The congregation became a sort of hub for the larger southwestern Alberta Jewish community, including members from Magrath, Pincher Creek, Blairmore and Milk River. In 1921, there were about 100 Jews in Lethbridge and 50 in the aforementioned surrounding towns.

By 1935, the community purchased an old church and turned it into Beth Israel Synagogue, which in 1952 acquired a rabbi from the U.K., Morris Susman, who was there for a decade.

The congregation, which at this point had 62 contributing families, moved to a new building in 1956.

“However, Jewish numbers in Lethbridge began to decline as young families sought opportunities elsewhere,” Land of Promise notes. And, like Medicine Hat, this decline has accelerated in more recent years.

Garry Kohn, who was born in Medicine Hat, has been based in Lethbridge since 1962. He spent some time in Winnipeg and Vancouver, and moved to Israel to enlist during the Six Day War in 1967, before returning to Lethbridge in 1968 to run his business.

“We’re down to maybe 12 souls here in Lethbridge right now,” said Kohn, who was the last president of Beth Israel before they sold the building in 2009.

“They allowed us to use the small chapel for 10 years rent-free as part of the agreement we had with them, but since our community has dwindled so much, there was no point in signing a lease to go to shul two times a year.”

He says his family continues to celebrate the major holidays, such as Hannukah and Pesach, at home, but there isn’t really any communal life to speak of.

“The interesting thing, whether you’re talking about Medicine Hat or Lethbridge, there wasn’t one marriage union that actually came out of the Jewish community. It was almost like one big family, so you just didn’t do those,” said Kohn.

“When the young people grew up, they went away to university and found larger communities, and they found their mates there.”

Professor Goldie Morgentaler, a Yiddish translator, bucked this trend when she moved to Lethbridge from Montreal in 1997 to teach literature at the University of Lethbridge, where she says she “very occasionally” has a Jewish student.

Morgentaler’s mother – Chava Rosenfarb – was a Yiddish author and poet, whose final book Morgentaler is in the process of translating to English. (Her father is famed physician and abortion rights activist Henry Morgentaler.)

If she gets stuck on a particular word, finding a solution is as easy as firing off an email to a fellow Yiddish scholar, she added.

The only instance where she felt particularly alienated as a Jew in Lethbridge was when one of her university colleagues – Tony Hall – was fired without pay for promoting Holocaust denial on YouTube, a decision that was reversed in 2017 before Hall’s 2018 retirement.

“I was shocked, because I knew him,” said Morgentaler, who was the lone faculty member to write a formal letter of complaint to the university about Hall’s conduct, although others privately expressed their concern. “That was not a pleasant experience, because if I’m complaining and everyone knows I’m Jewish, they can say, ‘Well, she’s complaining because she’s Jewish.’”

Morgentaler didn’t agree with the decision to fire him without due process, which is a violation of the professors’ collective agreement, but was troubled by the way the conversation shifted from Hall’s transgressions to how he was mistreated by administration.

“The whole story of his anti-Semitism fell by the wayside. Nobody talked about that anymore and what they were upset about was that due process wasn’t followed, which was true,” she said. “He shouldn’t have been suspended without pay, but he should have been suspended.”

Even without the Hall affair, it can be a pretty alienating experience as a Yiddish translator in Lethbridge, but Morgentaler and her husband have property in Toronto, where they spent much of their time off pre-COVID.

“I get my fill of Yiddishkite there,” she said.

For more information about the history of the Lethbridge Jewish Community visit the Jewish Historical Society of Southern Alberta.