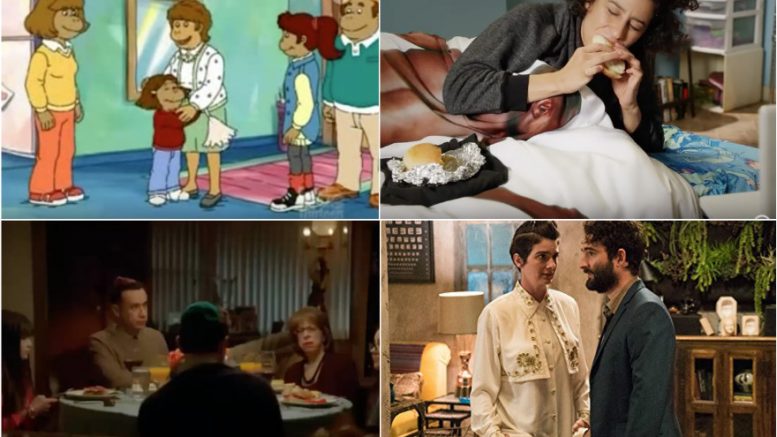 (JTA) — When it comes to Jewish holidays in pop culture, Hanukkah gets top billing — but that has more to do with its proximity to Christmas than its religious significance.

For Jews, the main event is Yom Kippur, which starts this year at sundown Oct. 11. Until sundown the next day, Jews around the world will be fasting, praying and repenting.

It’s admittedly not the most fun day on the Jewish calendar, but watching our favorite television characters celebrate Yom Kippur makes it a little easier to get through the day. Depending on your level of observance, here are seven shows you can watch either before the Day of Atonement (to get in the mood), during (to distract yourself from hunger), or after you break the fast to remind yourself that it will be another year before you have to do it again.

And if you finish these episodes and need something else to watch, there is always the 2007 film “Atonement,” starring Keira Knightley, James McAvoy and a very young Saoirse Ronan. It’s not technically about the holiday, but hey, it’s atonement.

Where you can watch: HBO GO, Amazon Prime

Why you should watch: “Entourage” had its ups and downs over its eight seasons, but this episode is one of the best. Even if you’ve never seen the show — about actor Vince Chase (Adrian Grenier) and his buddies living large in Hollywood — you can get what’s going on. All you need to know is that Vince has been chasing the lead role in a Pablo Escobar biopic. His former agent, Ari Gold (Jeremy Piven), and producer, Nick Rubenstein (Adam Goldberg), have one day to get him the role — and that day happens to be Yom Kippur, when they are both at synagogue with their families. The highlight here is Ari at his most Ari as he tries to use his phone without his wife finding out.

Why: “Transparent” is one of the best depictions of Judaism on TV today; this episode proves why. The Pfeffermans, like many American Jews, are not the most observant family, but they observe Yom Kippur (though, also like many Jewish families, they have varying levels of commitment). Additionally, the episode is educational for those who don’t know anything about Yom Kippur, as it shows a lot of details, including the line to get into synagogue and a peek at the actual service. Then there’s the break fast, which, like most Jewish family gatherings involves people talking over each other, arguments, tears and, of course, bagels.

What: “Difficult People,” Season 1, Episode 4, “The Courage of a Soldier”

Why: Julie Klausner and Billy Eichner’s pop culture banter is reason enough to watch “Difficult People,” but in this episode — in which Julie and Billy have to spend Yom Kippur with their actual families rather than their chosen family (read: each other) — the supporting cast members are MVPs. There is Andrea Martin as Julie’s narcissistic therapist mother (who doesn’t fast because it’s “uncomfortable”); Fred Armisen as Billy’s sweet, more religious brother, Garry, and Jackie Hoffman as Garry’s wife. Plus, Dalia White has some of the best lines as one of their daughters, Tal, whose bat mitzvah theme is “it gets better.” As funny as this episode is, it also has some rare moments of sincerity, like when Billy and Garry talk about their dead father.

Why: Jill Kargman’s comedy about being a black sheep (read: Jewish) amid a blue-blooded, hoity-toity Upper East Side set depicts one way an interfaith family celebrates the Day of Atonement. This is another show that has great guest stars — Blythe Danner and Dan Hedaya as Jill’s parents — and gives viewers an accurate glimpse of the Yom Kippur service. It’s also the only one to acknowledge the cold, hard truth: nobody’s breath smells good when they are fasting. At one point, Jill refers to the day as “Yom Kips,” and we’re hoping that will catch on.

Why: This cartoon, about anthropomorphic animals, is the only show on this list that is appropriate for all ages — as in you can watch it with kids and enjoy it as an adult. Arthur’s monkey pal, Francine, and her family are the only Jewish characters on the show. Francine doesn’t have to fast because she’s a kid, but wants to try it to prove to her older sister that she can. But when Arthur wins a pizza party and schedules it on Yom Kippur, Francine struggles with whether or not she should go. This is a good episode to watch if you have kids who are thinking about fasting for the first time or feel left out during Jewish holidays. (Bonus: Joan Rivers lends her voice as Francine’s grandma.)

What: “Gossip Girl,” Season 5, Episode 5, “The Fasting and the Furious”

Why: A series about WASPy, rich Upper East Siders has an episode about Yom Kippur? Yep! Blair Waldorf’s Jewish stepdad, Cyrus (played lovably by Wallace Shawn), hosts a Yom Kippur break fast. And unless you (or a relative) happens to be pregnant with a prince’s baby, this isn’t a typical break fast at your bubbe’s. Really, on what other show would someone donate $100,000 to Chabad just to find out what synagogue someone attends? In a voice-over, the titular Gossip Girl has this piece of knowledge to impart: “As challenging as atoning can be, the rewards make it worth the sacrifice.”

Why: This is an episode of a mini web series of “Broad City,” so it’s short and sweet – and it’s a funny three minutes, so there’s really no reason not to watch. Abbi and Ilana confess their sins to each other — stuff like stealing a neighbor’s GQ magazine — as they wait for the sun to go down so they can eat their extremely not kosher bacon, egg and cheese sandwiches. Can they do it? Watch and find out.