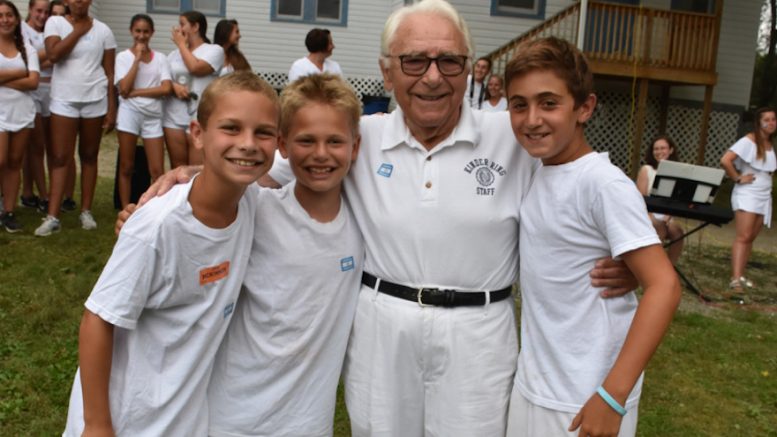 A feature on this 95-year-old Yiddish camp teacher was a bright spot this year. (Sharon Strongin/Camp Kinder Ring)

(JTA) — This year hasn’t been an easy one. From shootings that claimed many innocent lives, including at a synagogue in Pittsburgh, to political turmoil in the United States and abroad, there have been many moments of sorrow.

But there were bright spots too. As 2018 comes to a close, JTA looked back at some of the heartwarming stories we reported on this year, from a group of German volunteers who are fixing Holocaust survivors’ houses to an Iranian refugee who raised money for Pittsburgh’s Tree of Life synagogue. Here are some of the highlights, sorted chronologically.

“I ask them to call me Mikhl,” Baran told JTA, noting that the name is the Yiddish form of Michael. “That’s already, in a sense, imbuing the idea that Yiddish is a great national treasure of the Jewish people.”

Camp Kinder Ring, started in 1927 by the Workmen’s Circle, was originally a Yiddish-language camp, but today the mamaloshen isn’t heard quite as often. That’s why Baran’s lessons — both about Yiddish and the world in which it was spoken — hold a special significance.

“I worry a great deal because my generation is passing already,” he said. “It’s almost gone. And we are the remnant. If we will not tell the story, who will?”

Gabby, Serena and Cole Deutch wanted to do something after 17 people were killed in February at Marjory Stoneman Douglas High School in Parkland, Florida. Since Purim was around the corner, the college-aged trio — whose father Ted Deutch is a Democratic congressman representing the district where the shooting took place — came up with the idea to bake and sell hamantaschen, the traditional pastry eaten during the holiday.

They started recruiting friends at campuses around the country to do the same and urged them to donate the proceeds to groups fighting gun violence as well as the families of the Parkland victims.

Gabby Deutch, a student at Yale University, said she was happy to make a difference.

“I was feeling disappointed by a lack of response, at least on Yale’s campus,” she told JTA, “and a lot of people since this has become public have come up to me and really expressed gratitude that something is happening about it, which makes me feel like there are people who care about this issue.”

The Harry Potter author, who is not Jewish, has taken it upon herself to fight Jew hatred online. Amid debates about anti-Semitism in British politics in April, J.K. Rowling used Twitter to define the term for her 14-plus million Twitter followers.

“Most UK Jews in my timeline are currently having to field this kind of crap, so perhaps some of us non-Jews should start shouldering the burden,” she said in response to a user arguing that “Judaism is a religion not a race.”

“Antisemites think this is a clever argument, so tell us, do: were atheist Jews exempted from wearing the yellow star? #antisemitism,” Rowling continued.

But she didn’t stop there. In August, she called out a fellow British writer on Twitter over his criticism of Jewish complaints about anti-Semitism in the Labour Party. And her latest book, “Lethal White,” which came out in September, comments on the dangers of anti-Semitism by including a character whose obsessive anti-Zionism morphs into anti-Jewish hatred.

The Saxon Friends of Israel brings volunteers from Germany to Israel to fix the houses of Holocaust survivors living there. The group’s efforts drew publicity in October when a rabbi met one of its volunteers on a flight and posted about it on Facebook. Rabbi Zalmen Wishedski described his meeting with a 54-year-old house builder named Roland who had been traveling to the Jewish state twice a year for around five years to help Holocaust survivors.

“I cannot change or repair the whole world, I cannot repair all my people did 70 years ago,’” the rabbi recalled Roland telling him. “All I can do is painting. It’s what I’m doing, bringing a little bit of good to the world.”

In a promotional video, one volunteer explains that both of his parents were avid Nazis and that he is the only one in his family who wants to “deal with the issue.”

Ten American baseball players became Israeli citizens so they could play on the country’s national team in international competitions leading up to the 2020 Olympics. The Jewish athletes made aliyah in October. They want to represent Israel in 2020 in Tokyo. Some of the players also represented Israel in last year’s World Baseball Classic, where Team Israel shocked followers by reaching the quarterfinals.

“These players showed great enthusiasm for working in Israel to reach the Olympics in particular and to develop the game in Israel in general, and the players who played in the World Championship were exposed to Israel and saw how they can help the country become a force to be reckoned with in international baseball,” Israel Baseball Association President Peter Kurz told Ynet.

An Iranian refugee raises over $1.2 million for the Pittsburgh synagogue

Khashayar “Shay” Khatiri was moved to action shortly after hearing about the shooting at Pittsburgh’s Tree of Life synagogue that left 11 dead in October. So the Iran native and Washington D.C. resident, who is not Jewish, started a fundraiser through the GoFundMe website. Donations started pouring in, quickly reaching more than $1.2 million.

Khatiri, who is seeking political asylum due to his political activism against the Iranian government, says that he was happy to see people coming together to aid the synagogue.

“It was nice to see that people really cared and wanted to help the survivors,” he said.

At 3 o’clock in the morning, a neighbor roused Rabbi Barry Diamond from sleep to let him know that their Southern California neighborhood had been given a voluntary evacuation order due to the wildfires that were ravaging the state that November. About 20 minutes later, the rabbi arrived at Temple Adat Elohim, the Reform synagogue in Thousand Oaks where he works, to see fire surrounding the area by the building.

But that didn’t deter Diamond, 56, from dashing into the synagogue to save his congregation’s holiest objects. He ran in twice, grabbing four Torah scrolls, one of which had survived the Holocaust, as well as the Book of Esther scroll traditionally read on Purim.

“I would say I was a cross between nervous and determined to get these out,” Diamond told JTA. “Sometimes you just have to put your head down and do the work and worry about your feelings later.”