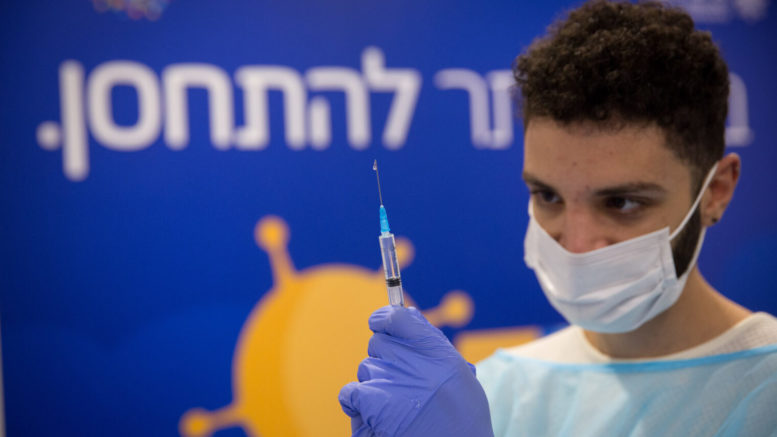 A healthcare worker prepares a vaccine at a facility operated by the Tel Aviv Sourasky Medical Center in Rabin Square, Dec. 31, 2020. (Miriam Aster/Flash90)

(JTA) — Israel is making headlines for its response to COVID-19 — again.

Early on in the pandemic, Israel was lauded for its tough lockdown measures and low coronavirus rates, only to become a cautionary tale over the summer, when case numbers skyrocketed.

Now Israel is getting praised again, this time for its vaccination campaign. On Jan. 1, Israel announced that it had vaccinated more than 1 million citizens — over 10% of its population of nearly 9 million, and far and away the highest vaccination rate worldwide. The country is vaccinating 150,000 people every day and hopes to vaccinate half of its population by March.

But the country is also experiencing a renewed spike in COVID-19 cases, and the pandemic’s steepest toll could yet be ahead. So far, the disease has killed nearly 3,500 Israelis.

Here’s what you need to know about Israel’s vaccine drive, from what’s making it work to how it relates to the looming elections to why the country isn’t anywhere close to ending its outbreak.

Like most developed countries, Israel provides health care to all of its citizens free of charge, and the coronavirus vaccine is no exception. The country is prioritizing elderly citizens and those with immunosuppression or other health risks, but everyone is eligible for the vaccine, or will be in the future.

To receive medical care, Israelis choose between four national networks of health clinics. All of the networks provide the same basic set of government services and medications, but they’re concentrated in different parts of the country and each offer their own premium health care plans, with access to a wider range of services.

The four networks give the government a relatively efficient way to distribute vaccines across the small country, and the networks are competing to provide the fastest and most convenient shots. Vaccination sites are running 24 hours a day, 7 days a week, some even on Shabbat, a day when most Israeli services shut down. Israelis are also able to book appointments on an app.

One of the networks, Maccabi, is advertising a drive-in vaccination site near the port city of Haifa, with a video showing people rolling up their sleeves without taking off their seatbelts. Clalit, the largest health care network, has a running counter of how many people it has vaccinated. As of Monday night, it stood at 594,418.

2. The country has been relatively liberal about who can get the vaccine.

Like most countries, Israel is prioritizing frontline healthcare workers and the elderly, especially those in nursing homes, in its first batch of vaccines. But it has been handing out vaccines relatively freely. For starters, Israel included everyone over 60 in the first tier. Other countries have higher age limits or, in the case of the U.S., are treating the elderly in congregate living settings differently from those who live in their own homes.

What’s more, where other countries are imposing procedures to ensure that no others get the vaccine until it’s their turn, Israel has seemed to be prioritizing getting shots into arms over hewing to a rigid hierarchy. Israelis say that if you’re near a vaccination center at the end of the day, when any prepared vaccines must be used or discarded, you are likely to be able to get a shot, even if you’re young, healthy and don’t work in health care.

Some vaccine providers are taking this approach in the United States, too; a law student in Washington, D.C., shared this week that he got a shot because he was at the grocery store pharmacy just before closing time. But more often, states are telling Americans that they must plan to wait — and in some cases, as in New York, imposing steep penalties for administering vaccines out of order.

Some signs of tension appear to be emerging as Israel runs through its first big batch of doses, though. On Monday, the country’s health minister stopped supplying vaccines to a Tel Aviv hospital that administered doses to teachers who did not meet eligibility criteria. (The national teachers union has vowed to strike if teachers are not vaccinated imminently.) At basically the same time, the prime minister’s office has come under fire for giving the vaccine to all of its employees, regardless of their age and health.

3. A lot is riding on this for Prime Minister Benjamin Netanyahu.

Political machinations are hardly the only motivation for getting the country vaccinated. But Netanyahu knew that his support was tenuous when he committed early to vaccine contracts, at high cost, and now that it’s election season in Israel (again), perhaps nothing could do more to shore up his sagging support than a successful vaccination drive earning the world’s esteem and allowing the country to safely get back to normal. The prime minister was the first Israeli to be vaccinated, and he has posed with a wide array of constituents in vaccine photos — including with an Arab Israeli he said was the 1 millionth person vaccinated in the country.

Exactly how many Israelis will be vaccinated before March 23, the date of the upcoming election, remains to be seen. But the current pace of vaccinations suggests that most Israelis will have gotten the concrete benefit of vaccination by then, even as other aspects of Netanyahu’s leadership remain ripe for criticism. (Remember that massive protests against him have taken place whenever there is not a lockdown, and sometimes when there is.)

4. Israel is facing criticism for not vaccinating Palestinians — even as Palestinian leaders say they don’t want the help.

As soon as the charts showing Israel leading with its vaccination campaign, criticism emerged over access to vaccines in Gaza and the West Bank, the Palestinian territories that Israel occupies but does not manage. Headlines from NPR, the Associated Press and other news organizations have implied that Israel is not delivering vaccines to Palestinians, and that narrative has gained traction, particularly among longstanding critics of Israel. in Canada, Jewish leaders are raising the alarm about members of Parliament who have cited the vaccine situation in criticism of Israel as an apartheid state.

In fact, the Palestinian Authority is responsible for delivering medical care in its territories, according to the Oslo Accords signed in 1993. And the Palestinian Authority, which controls the West Bank, has said it does not want Israel’s help and is working to purchase vaccines of its own. It expects to receive its first shipment of a Russian-developed vaccine next month.

Many people, including allies of Israel, say Israel should help vaccinate Palestinians anyway, for both moral and practical reasons. Hundreds of rabbis from multiple denominations, organized by Rabbis for Human Rights, have signed a letter arguing that Israel has a moral imperative to deliver vaccines to Palestinians, especially in Gaza, the strip of land controlled by Hamas where medical care and the general standard of living is poor.

Israel is not alone in prioritizing its own citizens getting vaccinated. Equity of access to vaccines is a pressing global issue, with wealthy countries buying up the vast majority of the first vaccines and leaving huge swaths of the world, including much of Africa, without a clear path to ending their pandemics. Israeli leaders say they intend to donate doses left over after Israelis are vaccinated to needy countries, potentially including Palestinian territories. But right now they — like other national leaders around the world — are focused on their own citizens, including the nearly 2 million Arab Israeli citizens who are part of the current vaccination campaign.

5. Whether the pace of vaccinations can be sustained is unclear — and cases are mounting.

Only another 1 million doses are scheduled to arrive later this month, although the country is trying — along with everyone else on Earth — to obtain more. (A new deal with Moderna won’t deliver vaccines before February, officials announced Tuesday.) If no additional doses are received, only about a quarter of the country’s population will have gained immunity through vaccination by the end of January, leaving millions of people vulnerable to COVID-19 at a time of high community spread and with at least one highly infectious new variant circulating.

In just one 24-hour span this week, one in every 1,000 Israelis was diagnosed with COVID-19, and a third lockdown, imposed late last month, is being tightened. The number of “serious cases” — people who are hospitalized and in poor condition — is nearing its fall peak, and infections are widespread across all sectors of society.

According to the government, more than half of older Israelis have received one dose already. But even with the high vaccination rate, Israel is far from ending its onslaught of cases and deaths through vaccination. That’s true for every country, but it could come as a harsher realization for one with international acclaim for its vaccine rollout.