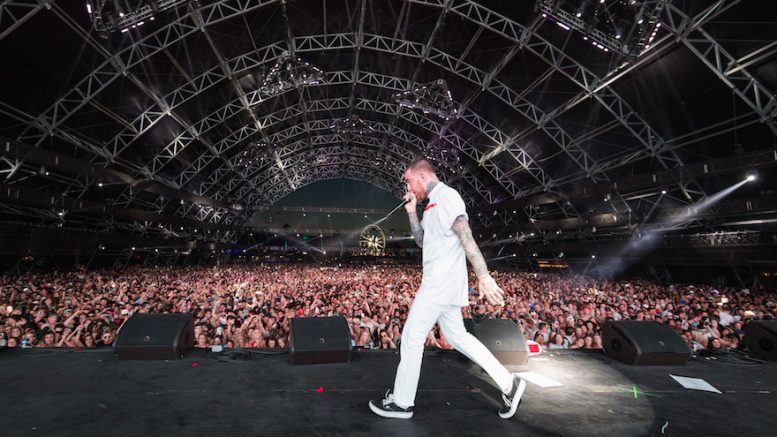 (JTA) — One of the most famous rappers in the world right now is a Jew from Canada. Drake, who grew up as Aubrey Drake Graham, attended day school in Toronto, once rapped about his bar mitzvah on “Saturday Night Live” and has appeared on the cover of Vibe wearing a diamond-studded chai.

As it happens, however, an array of 21st-century Jewish rappers are making waves now in various hip-hop genres, even if none have achieved Drake’s superstardom (at least not yet). Their music ranges from intelligent comedy to so-called frat-rap, a genre popular at college parties for its glorification of sex and drinking. Here’s a primer on five of the best-known Jewish rappers on the scene today.

Listening to a Lil Dicky song is similar to watching a Jewish comedian’s standup routine. He mines his neuroses for topics — from his anxiety about saving money to his sexual prowess to worries about being good at his job — and then weaves a hilarious, first-person narrative out of them. Before becoming a rapper, the 29-year-old graduated from Cheltenham High School outside of Philadelphia (fun fact: Israeli Prime Minister Benjamin Netanyahu is also an alum) and worked at an advertising agency. His comedic videos, which first propelled him to fame, garner tens of millions of views on YouTube — and nearly as many detractors as fans. Nonetheless, his music pulls off an improbable feat: It skewers both hip-hop and American Jewish culture while managing to honor both at the same time.

Best Jewish lyric: “If I’m Jewish or Christian/does it affect your decision/to see past religion/to simply listen to wisdom?” (from “Just Listen”)

Asher Roth burst onto the scene in 2008 by rapping about a topic pretty familiar to young American Jews: partying at college. His self-explanatory tune “I Love College,” which made Billboard’s Top 40 singles chart, is an ode to drinking, smoking weed, having sex — and remembering none of it. While to some polo-wearing teenagers it may have seemed harmless at the time, the song inspired a generation of fraternity brothers, such as Sammy Adams and Mac Miller (see below), to start spitting about their red Solo cup party antics. After “I Love College,” Roth, 31 — who rarely talks about his Jewish identity — released a few subsequent albums that flew largely under the mainstream radar.

Best Jewish lyric: “I’ve been wilding since the rabbi snipped it.” (from “Steve Wynn”)

Of all the characters on this list, Bronson may be the most colorful. He grew up in Queens, New York, the son of an Albanian Muslim father and Jewish mother, and he worked as a chef before becoming a renowned bulldog of a rapper. Now equally known for his size and big red beard, Bronson, 33, sprinkles foodie references into his tunes. Jewish cuisine, in particular, makes the occasional appearance: He has rapped about being drunk on Manischewitz and used brisket as an R-rated euphemism. In addition to hosting a food show, “F*ck, That’s Delicious,” on the Vice channel, he was spotted giving Brooklyn’s newest Jewish deli, Frankel’s, a thumbs up when it opened last year.

Mac Miller — a self-described “Jewish Buddhist tryna consume the views of Christianity” who features a Star of David tattoo on his hand — started out as the most commercially successful face of the frat-rap genre around 2011. But since then Miller, 25, has managed to transcend that label and gain critical acclaim in the mainstream music world. His latest album, the buttery smooth “The Divine Feminine,” featured big-name producers, got positive reviews and climbed to No. 2 on the U.S. Billboard 200 albums chart. He’s also currently dating pop star Ariana Grande — so mazel tov, Mac.

In 2011, Steven Markowitz was a nice Jewish boy from Long Island, New York, who had graduated from the University of Pennsylvania’s prestigious Wharton business school and was working at Google. Now he’s an established rap star who plays sold-out shows across the country to fans affectionately nicknamed the “Hoodie Mob.” His style tends to be more poppy and melodic — often with hooks based around a piano or guitar riff — and there are plenty of sex stories and nods to frat culture to go around. As for the Jewy name? “I just wanted to come up with a fun, punny name that related to my roots as a New Yorker,” the 28-year-old said last year.