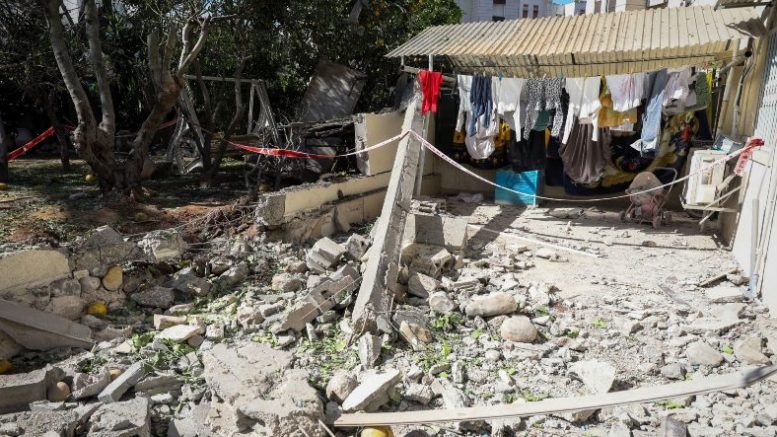 An apartment building hit by a rocket fired from the Gaza Strip in Ashkelon, in southern Israel, on May 5, 2019. (Noam Rivkin Fenton/Flash90)

JERUSALEM (JTA) — A 35-year-old man became the fourth Israeli civilian to be killed by Gaza rocket fire, after a rocket struck an apartment building in the southern coastal city of Ashdod.

The man was in the stairwell of the building when it was struck by a rocket late on Sunday afternoon May 5. He had been running to the building’s bomb shelter. He was taken to the hospital in very critical condition and later died of his injuries, the Kan national broadcaster reported.

Earlier on Sunday afternoon, two Israeli men were killed, one when a rocket slammed into a factory in Ashkelon and a second when a rocket fired from Gaza scored a direct hit on a car driving near Yad Mordechai in southern Israel.

Two other men who worked for the factory in southern Israel are reported to be injured in critical condition.

Early Sunday morning, Moshe Agadi, a 58-year-old father of four, was hit with shrapnel to his chest and stomach in the yard of his home in Ashkelon after a rocket fired from Gaza slammed into an apartment building. He died in an ambulance on the way to the hospital. Agadi had gone outside to smoke a cigarette between frequent rocket warning sirens and did not make it to the home’s bomb shelter in time.

As of about 8 p.m. on Sunday evening, nearly 700 rockets were fired from Gaza at Israel, in an escalation which began on Saturday morning at 10. The Iron Dome missile defense system has intercepted at least 150 of the rockets.

A five-hour meeting of the government’s Security Cabinet ended at 8 p.m. on Sunday.

“The Cabinet has instructed the IDF to continue the strikes and to prepare for continuation. The supreme consideration is the security of the state and its residents,” read the short statement issued by the Cabinet at the conclusion of the meeting.

The Israel Defense Forces reported on Sunday evening that some 280 Hamas and Islamic Jihad military targets have been attacked in retaliatory strikes since Saturday evening. The IDF struck a building located in a residential neighborhood in Gaza City that Hamas uses for operational purposes, including protecting and hiding terror infrastructures, the IDF said in a statement.

The attack on the building came after the IDF’s cyber defensive operation thwarted an attempted cyber-attack by Hamas that originated from the building, the IDF said.

Gaza authorities reported that the Palestinian death toll since the start of Israeli retaliatory strikes was at 16 on Sunday evening, according to Haaretz.

Also on Sunday, the IDF cancelled classes for all schools located up to 25 miles from the border with Gaza. Only workplaces with bomb shelters will be permitted to open up in the same area.

Dramatic scene on the streets of Ashdod, an Israeli port city, as a car goes up in flames following a direct hit from a rocket fired from #Gaza. pic.twitter.com/i32ozYHzae