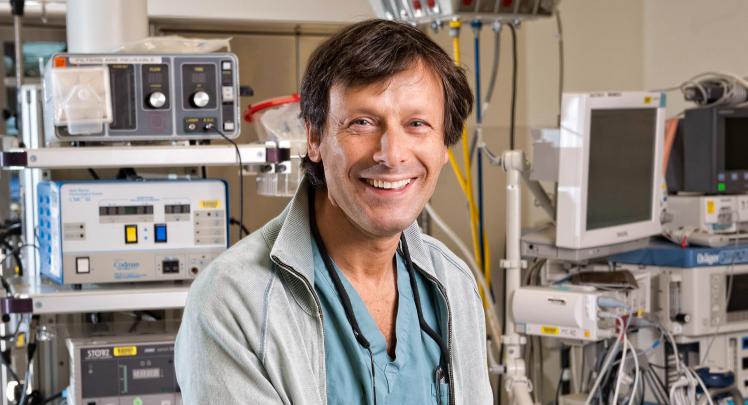 Jewish National Fund (Edmonton) and the Canadian Friends of Hebrew University (Edmonton) are teaming up this year to honour Director of the Clinical Islet Transplant Program at the University of Alberta, Dr. James Shapiro, at the Negev Gala on June 23, 2016.

(EJNews) – Jewish National Fund of Edmonton and Canadian Friends of Hebrew University in Edmonton are teaming up to honour Dr. James Shapiro at the Negev Gala on June 23, 2016.  His groundbreaking work in diabetes research and transplantation is saving lives in Edmonton and around the world. Kol Hakavod to JNF and CFHU for focusing our attention on transplantation research and for choosing such a deserving honouree for the Negev Gala.

Ben was just 17 when it was discovered that he had lost 70% of his kidney function. Shock went through all of us but, ever optimistic, we thought it would be decades before we were faced with the prospect of him having to undergo a kidney transplant… so life went on.

Unfortunately for Ben, end-stage renal disease came just 4 years later. In January 2011 his nephrologist gave him the news no one wants to hear, Ben’s renal function was just 12%. We were told that if Ben could find a living donor before his function decreased to 10% he could avoid the hardship of daily dialysis along with waiting years for a deceased kidney donor. In the years that should have been the prime of his life, Ben’s life deteriorated to a point where he had become too sick to attend school or work and was forced to move back home to Edmonton. While comforted that Ben was home, watching his quality of life so severely compromised was both challenging and heartbreaking. 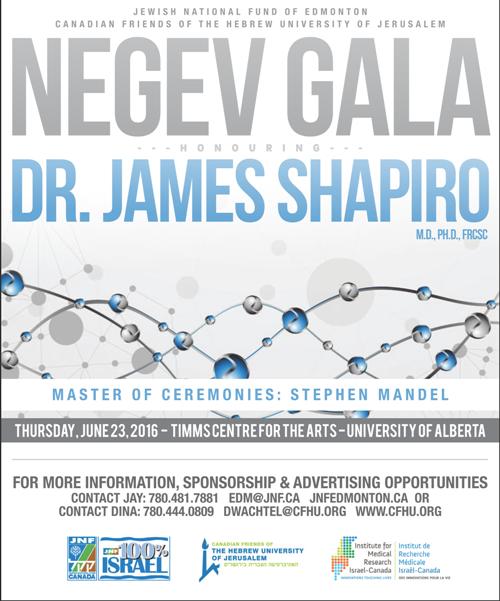 The ensuing months were filled with both angst and blessings. The first hurdle was to find a donor but how do you ask someone for such an extraordinary gift? Knowing that donations must be given freely, we were careful to avoid any potential ethical conflicts when discussing his need with others. When we emailed our extended family to inform them of Ben’s situation we included information on how they could contact the living donor coordinator at the hospital directly, should anyone be interested in being tested as a potential donor.

In Ben’s case, it was almost an embarrassment of riches as five people came forward to be tested. Ben was blessed that his father was a ‘near-perfect’ match and he received his kidney in May 2012. This miracle of modern medicine has given Ben a new lease on life, an opportunity to resume a normal life filled with socializing, hockey, golf and continuing his education. Having received his kidney from a living donor is an added plus as it means that Ben will hopefully not require a new organ for 15 – 20 years. The fact that all transplanted organs have a ‘shelf life’, and that all transplant recipients require a life-time on immune suppression drugs with their associated risks, speaks volumes about the need for continued research.

A huge blessing in all of this has been the knowledge that Edmonton is a centre of excellence in transplantation in Canada. Edmonton is the home to several world-class transplant clinician-scientists who are pushing the boundaries of transplantation in their respective fields. Dr. James Shapiro is an outstanding example of such. After completing his medical training in England he came to Edmonton to train in liver transplantation and complete his PhD. During this time Dr. Shapiro helped develop the Edmonton Protocol, the transplantation of pancreatic islet cells to reverse diabetes for those suffering from the most severe form of the disease. His work was published in the New England Journal of Medicine in 2000 and has become the accepted treatment protocol worldwide.

Dr. Shapiro continues to investigate techniques to improve the survival rate of islet transplants. Other investigations include his current work in early stage clinical trial where special devices that secrete insulin are implanted under the skin, potentially reversing the need for insulin injections and removing the need for life-long immune suppression medication. Additionally, as part of an international clinical trial for the OrganOx Metra liver ex-vivo perfusion device, last March Dr. Shapiro was the first in North America to successfully transplant a liver using this device that keeps the liver “alive” during transport between the donor and recipient. The device pumps oxygenated blood and nutrients through the organ, significantly reducing injury to the organ and increasing the window of viability for transplantation from 8-10 hours up to 24 hours. (The current standard for transporting organs is an ice chest.)

The ex-vivo perfusion liver research is hoping to show that marginal livers cannot just be maintained but also repaired on this device. Such success would be a huge win for deceased donation where 1 in 3 liver patients on the waitlist will die before an organ becomes available. With 1 out of 4 organs donated currently not of high enough quality to be used for transplantation, this technology could be transformative.

Doctors like Dr. Shapiro give all of us touched by transplantation hope that the road ahead will be easier for our loved ones. Our family, for one, is very thankful for their dedication to continuing to improve transplant medicine.

Sharon Marcus is co-founder of the Alberta Donates LIFE Coalition and an advocate for organ transplantation and donation.