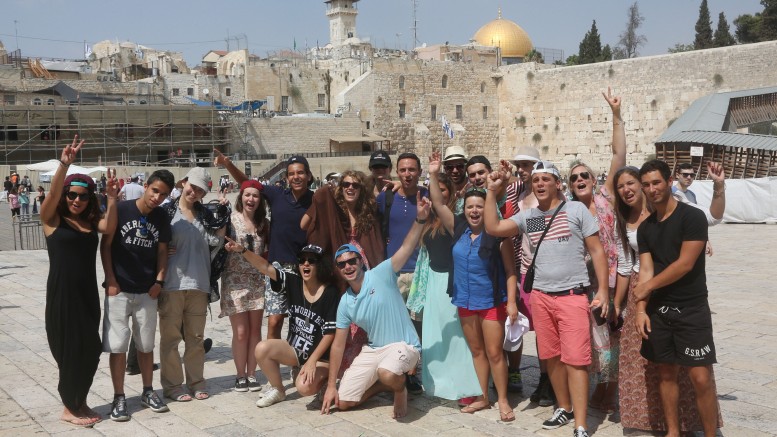 Taglit Birthright participants visit at the Western Wall in the Old City of Jerusalem on August 18, 2014. Photo by Flash90

(JTA) — The relationship between Israel and American Jews is a complicated mix of good news and bad news, and this week’s government compromise on the Western Wall, or Kotel, is a case in point: It’s a step forward in providing access for non-Orthodox Jews, but may also reinforce the reality that the main plaza doesn’t welcome Reform or Conservative Jews, who comprise the majority of affiliated American Jews.

The main Kotel plaza may never accommodate non-Orthodox prayer, but a new poll by the Ruderman Family Foundation provides some hope and direction for more positive developments on other fronts. (The poll, conducted by the Dialog research firm, surveyed 500 Israeli adults; the margin of error is 4 percent.)

Behind some dismissive statements and controversial actions by members of Israel’s government, average Israelis genuinely value the involvement of American Jews. In our poll, 82 percent of Israelis agree with Prime Minister Benjamin Netanyahu’s recent pledge that “every Jew should feel that the Western Wall belongs to him and every Jew should feel welcome in Israel.” Two-thirds agree that the relationship between Israel and American Jews directly impacts Israel-U.S. relations, and 88 percent think their leaders should work to strengthen that relationship.

Despite the generally warm feelings and intentions of so many Israelis — plus Prime Minister Netanyahu’s own formative experience among American Jews — many Israeli decision-makers and religious leaders still fail to see the value proposition. First, for Israel to be secure, it still needs a strong and vibrant alliance with the United States in which American Jews play an obvious and integral role. Second, if Israel wants to remain the Jewish state, it must find ways to recognize and accommodate, rather than alienate, the bulk of America’s committed Jews.

It is easy to assume wrongly that American Jews either don’t matter or they will continue supporting Israel because they have no other Jewish homeland. In the United States, Reform and Conservative Jews remain very supportive of Israel, and both movements have a strong showing in programs like Taglit-Birthright Israel and longer summer and yearlong programs. So yes, despite being treated occasionally as second-class citizens, American Jews still identify with Israel. In the long run, however, enough insults and humiliations leave a bitter taste, and it becomes more challenging to see Israel as a pathway to Jewish meaning for all.

Should skeptics be proved right about the eventual demise of progressive Judaism in America, the movements are still likely to dominate among American Jewry for the next several generations. And even this modern Orthodox American-Israeli sees no cause to celebrate a theory of diminishing Jewish returns.

Clearly, Israelis — including at least some Orthodox Jews — overwhelmingly value American Jews and their connection to Israel. Beyond the Ruderman Foundation’s own efforts to concretize this commitment among Knesset members and within the next generation of government and business leaders, there is a growing awareness among Israel’s elite that Israel needs American Jews at least as much as we need Israel — and this necessarily includes Reform and Conservative Jews.

With this new poll, we see that most Israelis don’t just need American Jews on board, they also want American Jews as part of Israel’s Jewish family. Any Israeli who says there’s no place for non-Orthodox Jews or American Jews in Israel can no longer claim to be speaking for more than a sliver of Israelis.

No matter how many delegations and conferences we organize, it’s ultimately up to Israelis at all levels of society to hold their leaders — political, religious, cultural — accountable. This isn’t just because American Jews expect it, but because Israelis do.