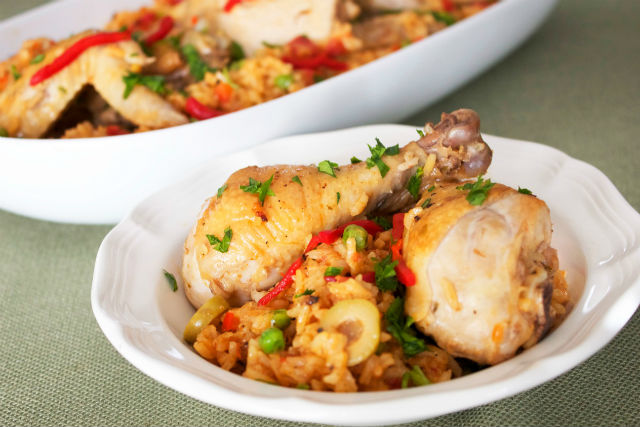 By Jennifer Stempel
(The Nosher via JTA) — Much as every culture showcases its individual form of the dumpling (um, matzah balls), arroz con pollo, or chicken and rice, is a dish for which every Latin country has its own unique spin.

Some use beer vs. wine, or crushed annatto rather than saffron, but one thing remains constant: arroz con pollo is one of the most crowd-pleasing dishes of a Cuban home. If you’re not familiar with the iconic dish, it might remind you of paella. With orange-tinged rice and emerald peas jeweled throughout, I can see where that assessment would make sense — but nothing is further from the truth.

Arroz con pollo has its own merits. It’s affordable, it’s rich with flavor and it’s visually gratifying. And the best part of all is how quickly it cooks up, making it ideal for a family-friendly weeknight meal.I have many distinct memories of eating arroz con pollo as a child, holding a chicken drumstick in each hand and taking alternating bites from side to side. As they say, the apple doesn’t fall far from the tree, since my son now devours this dish.
The next time you’re on the hunt for a quick and easy meal to feed a family, big or small, try making arroz con pollo. You may even figure out your own personal spin on the dish.
CUBAN-STYLE ARROZ CON POLLO

Add the onion, bell pepper, garlic, paprika, oregano, and cumin to the pot. Cook until onions soften, stirring  periodically. Stir in the rice and cook for another 2 minutes.

Cover the pot, and lower the heat to medium-low. Simmer for 20-25 minutes, or until most of the liquid evaporates and rice cooks through. (Note: It should not be completely dry.)

Turn off the heat. Remove the bay leaves, Stir in the frozen peas and the sliced olives, cover and let stand for 15 minutes.

(Jennifer Stempel is a TV development executive. To read more about her culinary adventures, check out: www.TheCubanReuben.com.)

Be the first to comment on "Recipe: Cuban-Style Arroz Con Pollo"