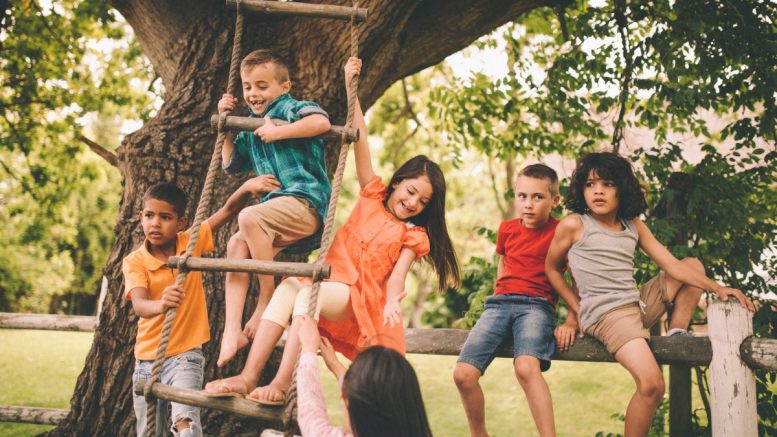 (Kveller via JTA) — My 5-year-old keeps asking me what his babysitter did to make Donald Trump hate her. Of all the kid-driven questions I’ve had to field — Why is the sky blue? Where is heaven? Why can’t I have candy for breakfast? — the hardest have been the questions we’ve been discussing recently. Questions about why there are people in America who fear Muslims and want to keep them out of our country; why people want to build a wall between the United States and Mexico; why people are protesting at the airport.

As a mother and a rabbi, I’m always happy for a teachable moment, but the educational demands of the current situation have been stretching me beyond my comfort level. I reassured my children that their babysitter, a religious Muslim, is not in immediate danger — but the questions keep coming, and the challenge of providing age-appropriate answers is a daunting one. How can I help my children make sense of the tumultuous time we’re living in? How can I teach them to be mensches in the midst of a political and cultural climate in which hate is haute and rancor is the order of the day?

As the level of dissension rises, many parents are feeling an increased sense of urgency to navigate not only the practical challenges of parenting, but the moral and spiritual ones as well. As I’ve struggled with my own questions about how to teach my children to be compassionate in a world that’s increasingly unkind, I’ve been deriving comfort and inspiration from several core Jewish concepts that address fundamental issues of compassion and human dignity.

The very first story in the Torah, the Creation narrative, features the remarkable idea that G-d created the world through speech. The narrative emphasizes the awesome power inherent in speech. Other biblical and rabbinic texts play out this theme of the ability that speech has to create and impact reality. In Jewish thought, speech is not just breath and sound, it’s a potent force that can shape the reality of our lives and our world.

When our elected leaders engage in hateful speech — when the very concept of truth is called into question — it perverts the divinely ordained idea of speech as a holy creative force. We need to teach our children that Judaism holds truth to be holy, and that just as God built the world through speech, we need to use our words to build up each other and to build a world of justice.

In a world in which disagreement is an increasingly salient part of our personal and communal interactions, how can we teach children that it’s not wrong to disagree, as long as it’s done in a respectful manner? It’s not a surprise that a religious tradition that prizes interpretation and analysis offers guidelines about how to disagree constructively. In Pirkei Avot (“Ethics of the Fathers”), the early rabbis distinguished between arguments that have a holy purpose and those that do not. A “machloket l’shem shamayim,” a disagreement for the sake of heaven, occurs when the parties state their opinions respectfully and when they’re motivated by a desire to find the truth rather than by a lust for self-aggrandizement or personal gain.

We need to teach our children that when they disagree with others, it should be a machloket l’shem shamayim — that they can disagree vociferously, but they must do so in a manner that is constructive and respects their opponent’s humanity.

B’tzelem Elohim — In the Image of G-d

One of Judaism’s foundational concepts is that human beings are created “b’tzelem Elohim,” in the image of God. This idea is as challenging as it is powerful. How can we possibly believe that all people — even those we find repugnant — reflect G-d’s holiness? The idea of humanity as a reflection of the divine provides an added impetus to treat all people with decency, even if we fundamentally disagree with them and the ideas they represent. It also reminds us to teach our children that all kinds of people are equally precious.

Children are obsessed with the idea of in-groups and out-groups — and current events present an uncomfortable reminder that adults are not so different. We need to teach our children that diversity is a marker, first and foremost, of the boundlessness of G-d’s creative power. We need to emphasize to our children that no racial, ethnic, national or religious group is better or worse than any other, that no person should be discounted or disrespected. Tolerance is necessary but not sufficient. We need to value the other, not just endure him.

There are so many questions that I cannot answer for my children, much less for myself, but I’m trying to take comfort in the answers that our sacred texts provide about how to live as honorable people in this deeply flawed world that we inhabit. For parents who feel helpless in the face of the discord we see all around, maybe this can be our opportunity for “tikkun,” corrective action. Maybe teaching our children is our way to help create a world of justice and love. They will succeed where we have fallen short.

(Rabbi Cara Weinstein Rosenthal is an educator, congregational consultant and writer focusing on outreach and engagement. As the family engagement specialist for the United Synagogue of Conservative Judaism, she works with synagogues to help them increase their potential to include young families in Jewish life and community.)