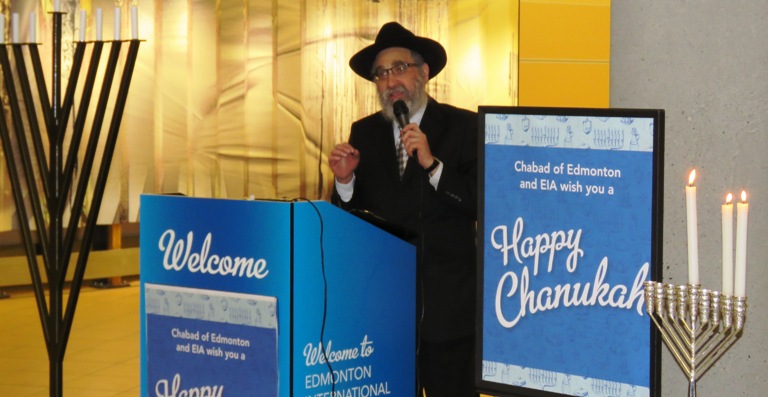 Chabad Rabbi Ari Drelich expanded the Menorah Lighting in Edmonton this year to include a beautiful display at the Edmonton International Airport.

(EJNews) – Edmonton’s Giant Menorah Lighting included a new dimension this Chanukah. Not only was there a wonderful celebration at the Legislature Grounds on the first night of Chanukah but on the second night,  Chabad Rabbi Ari Drelich installed two menorahs at the Edmonton International Airport (EIA). 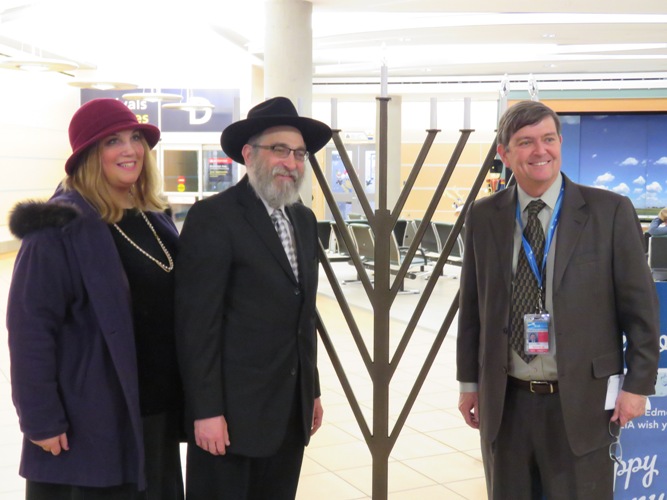 A Menorah Lighting celebration that included sufganiot, music and dreidles was held on December 7 at entrance 7 of the arrivals section at the EIA to mark the second night of Chanukah. Rabbi Ari was joined by Rebbitzen Rifka Drelich and Mr.Tom Ruth, CEO of EIA at the airport as well as a small group of well wishers and interested people who were arriving or picking up loved ones.

Chanukah is the Festival of Lights and the theme of this year’s Chabad Chanukah is “Celebrate your Freedom.”  Chanukah is an ideal time for everyone to celebrate the freedoms we enjoy as Canadians, said Rabbi Ari, including freedom of religion and religious expression.

“Canada is a bastion of light and Edmonton is a welcoming community,” noted Rabbi Ari.

He explained that the timing for the airport menorahs is particularly poignant this year, in light of the recent terror attacks that have occurred internationally.  Chanukah is a festival that celebrates the victory of the Maccabees over 2100 years ago in their struggle for religious freedom. 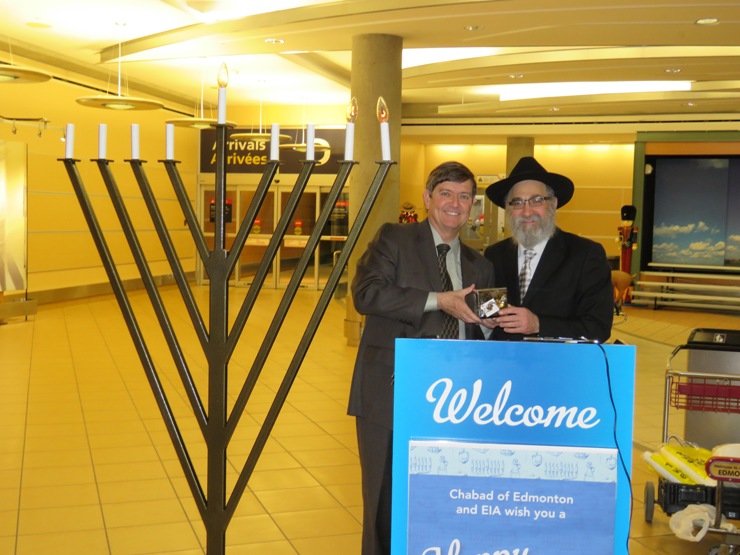 EIA CEO Tom Ruth thanks Rabbi Ari for the Chanukah gift – a lovely Tzedakah Box – to be used throughout the year for charitable giving.

Mr. Ruth welcomed Rabbi Ari and said that the EIA was pleased to include the beautiful menorah display for Chanukah and for the holiday season. He said the airport is an ideal location for the menorah to greet visitors to Edmonton. He enjoyed the music and mentioned that the sufganiyot, which were baked in Edmonton by Bliss Baked Goods, were really delicious.

Chanukah is a time to celebrate religious diversity and it is also a time for gift giving among friends and family.  As a symbol of friendship Rabbi Ari gifted the EIA CEO with a lovely ‘pushka’ – a box designed to hold small amounts of money for charity.

“What a wonderful way this is for us to celebrate the message of friendship, charity and our holiday of religious freedom,” explained Rabbi Ari.

He said that this event is also meaningful on a global stage and that this year the menorah at the EIA will greet newcomers including the Syrian refugees as they arrive in Edmonton. “It will welcome them to Canada, a country that treats people with respect and embraces religious freedom and expression,” concluded Rabbi Ari.

Chanukah, the Festival of Lights, is an eight-day festival which recalls the victory – more than 2,100 years ago – of a militarily weak, but spiritually strong, Jewish people over the mighty forces of a ruthless enemy that had overrun the Holy Land and threatened to engulf the land and its people in spiritual darkness.

The miraculous victory of religious freedom was compounded by a second great miracle that took place in the Holy temple, when only one jug of sacred oil was found still pure and sealed.  The Maccabees poured the one-day supply of oil into the great Menorah and rekindled the Menorah that had been desecrated and extinguished by the Greek-Assyrians.  Despite the small amount of oil, the flames did not burn out at the end of the first day, but continued to burn, continuously, for eight days, until new, pure oil arrived.

We recall these miraculous events by kindling a Menorah each night of Chanukah and to emphasize the inner message of Chanukah; triumph of freedom over oppression, of spirit over matter, of light over darkness. 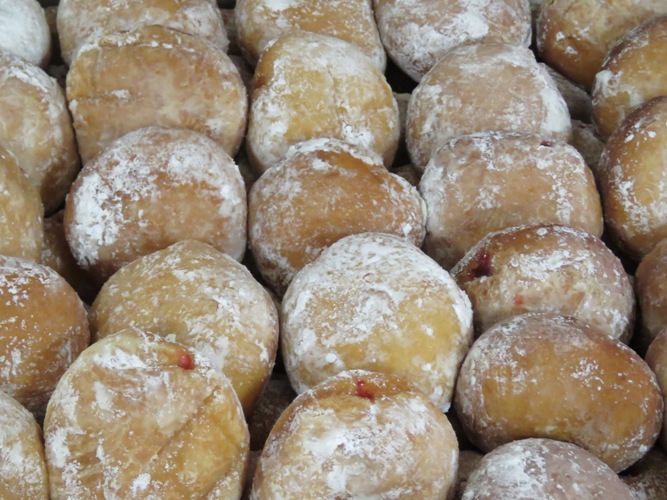 Delicious sufganiyot, baked locally from Bliss Baked Goods. It’s the oil (and the kosher bakery) that makes these fried donuts so tasty! 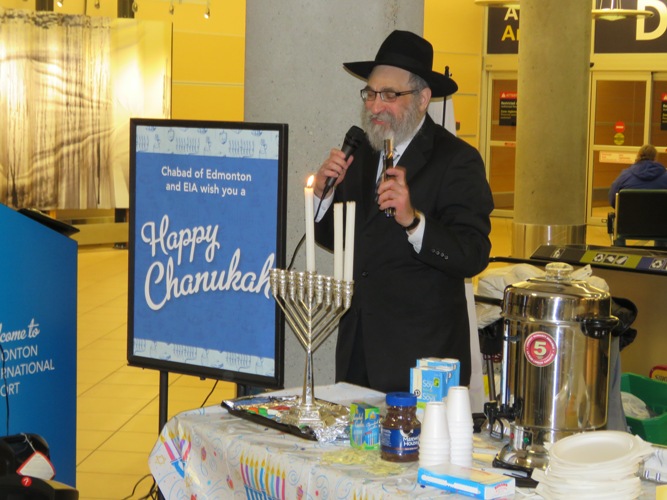 Edmonton Chabad Rabbi Ari Drelich explained that this is the first time a menorah has been displayed for Chanukah at the EIA. 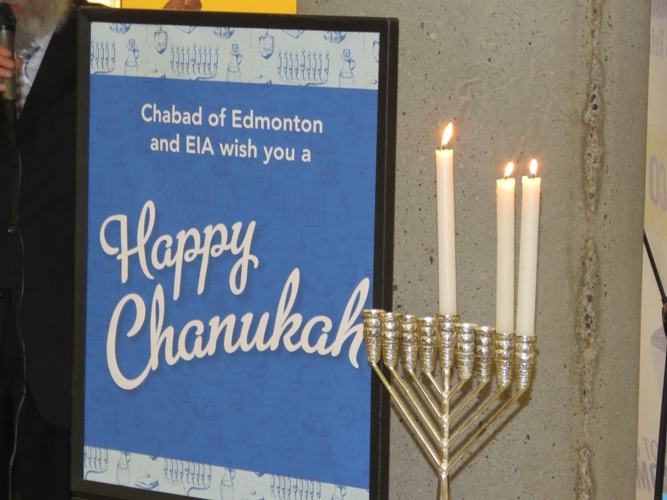