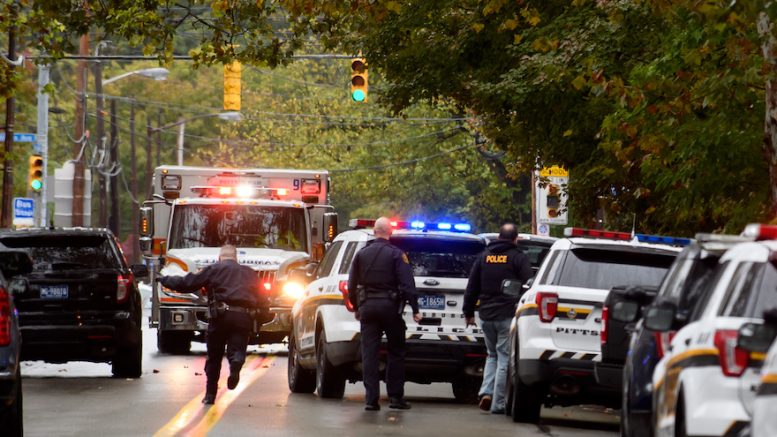 PITTSBURGH, PA - OCTOBER 27: Police rapid response team members respond to the site of a mass shooting at the Tree of Life Synagogue in the Squirrel Hill neighborhood on October 27, 2018 in Pittsburgh, Pennsylvania. According to reports, at least 12 people were shot, 4 dead and three police officers hurt during the incident. The shooter surrendered to authorities and was taken into custody. (Photo by Jeff Swensen/Getty Images)

(JTA) — The alleged gunman who killed 11 people and injured six at a Pittsburgh synagogue on Saturday assailed the Jewish resettlement agency HIAS on his web page and said “I’m going in.”

The shooting occurred shortly before 10 a.m. during a bris circumcision ceremony at The Tree of Life, a 150-year-old Conservative movement congregation in the Squirrel Hill neighborhood, which has a substantial Jewish population. Some 100 worshippers were at the synagogue, which was holding three services at the time.

Police arrived on the scene just minutes after receiving calls about the gunfire and engaged the suspect, who has been identified as Robert Bowers, a 46-year-old white male. Bowers shouted “All these Jews need to die,” according to reports.

Among the injured were a 70-year-old male and a 61-year-old woman. The man had injuries to his torso and was in critical condition. Four police offers were wounded.

Pittsburgh Public Safety Director Wendell Hissrich called the attack a hate crime, which puts it under the purview of the FBI.

Bob Jones, the FBI official from the Pittsburgh office in charge of the bureau’s investigation, at a late afternoon news briefing called it the ‘most horrific crime scene” he has seen in his 22 years with the FBI.

Bowers surrendered to a SWAT team on the scene. He allegedly was carrying an assault-style rifle and multiple pistols, a law enforcement official said. The suspect was taken to a hospital, Hissrich said, but did not offer details.

On screen shots from his suspended web page on gab.com, Bowers wrote:

“HIAS likes to bring invaders in that kill our people.

I can’t sit by and watch my people get slaughtered.

Screw your optics, I’m going in,” he wrote.

Bowers’ account was rife with anti-Semitic conspiracies and anti-Trump posts/conspiracies.

Jason Lando, a police spokesman, told CNN that neighbors were told to keep indoors and shelter in place. Carnegie Mellon University also was put on lockdown.

Police said that at least three officers were hit in the gunfire exchanges.

Later Trump told reporters: “This is a case where if they had an armed guard inside, they might have been able to stop him immediately” and “maybe there would be nobody killed.”

Tree of Life, which merged five years ago with another congregation, Ohr L’Simcha, is on the same campus as two other synagogues: New Light, which is also Conservative, and Dor Hadash, a Reconstructionist synagogue.

Two of Pittsburgh’s professional sports teams, the Steelers and Penguins, were among those that tweeted their thoughts and prayers.

Be the first to comment on "11 dead, 6 injured in Pittsburgh synagogue shooting"