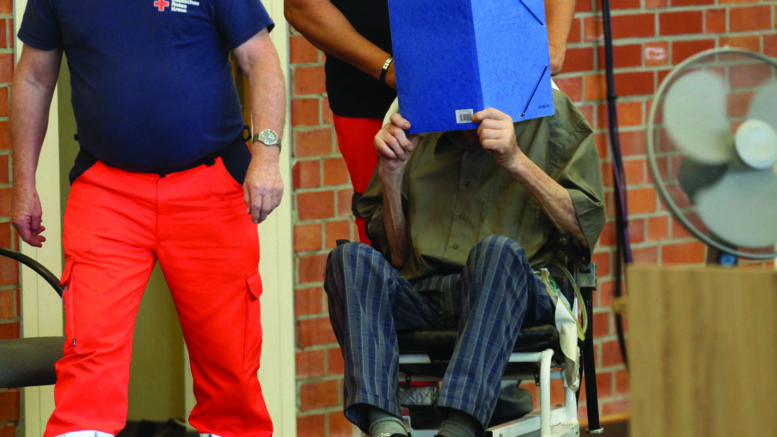 Former Nazi concentration camp guard Josef Schutz hides his face with a folder as he arrives to a makeshift courtroom in Brandenburg-Havel to hear the verdict in his trial, June 28, 2022. (Adam Berry/AFP via Getty Images)

BERLIN (JTA) – The oldest former Nazi camp guard ever put on trial in Germany has been sentenced to five years in prison.

Josef Schütz, 101, was found guilty of complicity in the mass murder of 3,518 prisoners at the Sachsenhausen concentration camp, north of Berlin, between 1942 and 1945.

Charlotte Knobloch, head of the Jewish community of Munich and Upper Bavaria, welcomed the verdict in a statement.

“Even nearly eight decades since the end of the war, there are Nazi perpetrators living among us,” said Knobloch, who survived the war as a child in hiding with a German Christian family. “Even after such a long time they can be held accountable for their deeds: That is the important message that comes from today’s verdict.”

The presiding judge at the court in Brandenburg-Havel concluded that Schütz was “aware that prisoners were killed there. By your presence, you supported” these acts, he told the accused, according to a report by Euronews and AFP. “Anyone who wanted to flee the camp was shot. Thus, every camp guard actively participated in the killings.”

Whether Schütz will actually spend any time in prison remains to be seen. The minimum sentence for complicity in murder would have been three years, the reports said. Schütz’s lawyer, Stefan Waterkamp, had said in advance that he would likely appeal, putting off the start of a prison term to early 2023.

The trial was postponed several times due to Schütz’s ill health.

During 30 hearings, Schütz — who had been a non-commissioned officer of the Waffen-SS — continually denied the charges against him and never expressed any regret. His recollections of the past were sometimes contradictory, according to news reports.

Historical documents presented at the trial include his name, date and place of birth, and prove his assignment to the “Totenkopf” (“Skull”) division of the Waffen-SS. He was charged with having shot Soviet prisoners of war to death and of assisting in murders using Zyklon B poison gas. He was also accused of keeping prisoners in inhumane conditions.

Chief prosecutor Cyrill Klement had said last month that he had no doubt that the defendant “worked in Sachsenhausen” and embraced his role.

According to the U.S. Holocaust Memorial Museum, the camp was opened in 1936 and initially held political prisoners. By the time it was liberated in 1945, some 200,000 had been held there, including Jews, homosexuals, Jehovah’s Witnesses, “asocials” — including Roma and Sinti — and Soviet civilians.

In all, some 100,000 were murdered there or died as a result of the terrible conditions.

Germany has prosecuted several accused accomplices to Nazi war crimes since the 2011 conviction in Munich of former concentration camp guard John Demjanjuk, who was found guilty as an accessory in the murders of nearly 30,000 Jews in the Sobibor death camp in Nazi-occupied Poland.

That case set a precedent, in that being a guard at a death camp was sufficient to prove complicity in murder.

Last year, Germany began a trial of Irmgard Furchner, a 96-year-old woman who had been a secretary to the commander of the Stutthof Nazi death camp.

Attorney Thomas Walther, who represented civil plaintiffs in the Schütz case — including children of survivors — recently told German media that it was important to put even such elderly defendants on trial, “to set an example.”