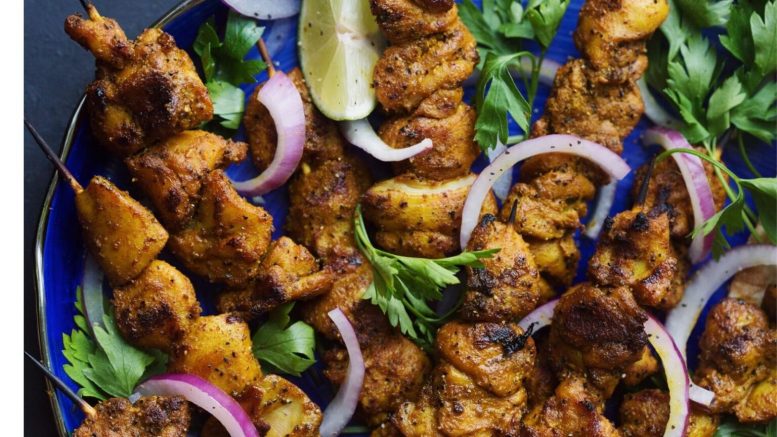 (This recipe originally appeared on The Nosher.)

If you think chicken kebabs sound boring, I don’t blame you. Usually they are. And dry. But not this recipe.

This recipe pays homage to one of the earliest forms of cooking: roasting meat on a spit over a fire. Roasting smaller cuts, like kebabs, became popular in areas like the Middle East, where firewood was scarce, as they proved more practical to cook over small fires. According to food historian Gil Marks, the word is derived from the ancient Persian “kabab,” which most likely stemmed from Aramaic.

Today, their popularity holds fierce. Shish taouk, kebabs of marinated, spiced chicken, are enjoyed in Egypt, Syria, Turkey and Jordan. In Iran, kebab koobideh, kebabs of ground meat mixed with parsley and chopped onions, are served alongside rice and yogurt. In Israel, kebabs of spiced ground meat are ubiquitous at holiday barbecues.

Shwarma, while not exactly a kebab, is probably the most internationally beloved example of spit-roasted meat. Its flavorings — cumin, turmeric and coriander — inspired these kebabs. Bright with lime and onion, and made with juicy chicken thighs instead of breasts, they take mere minutes to cook on a hot grill (you could do this on a grill pan, too). Plus they’re so versatile: delicious with rice, perfect with warm laffa bread and hummus, and refreshingly offset by tzatziki, tahini or even bright arils of pomegranate.

I never do, but if you have leftovers, unskewer them and toss with greens, olives, hummus, tomatoes, red onion and good olive oil for a perfect lunch.

Directions:
1. Combine the spices in a bowl. Add the cubed chicken and olive oil; mix well to combine. Cover and refrigerate for a minimum of 30 minutes, and up to 12 hours. The longer it marinates, the tastier it’ll be!

2. Take 12-15 wooden or metal skewers. If you’re using wooden skewers, soak them for half an hour so they don’t burn and catch fire on the grill. Thread the marinated chicken onto the skewers — I like to thread them longways so there’s more surface area to grill.

3. Preheat the grill to medium-high heat and grease it by dipping a few paper towels in vegetable oil then, using tongs, rub them carefully over the grates until glossy.

4. Place the kebabs on the grill and cook until golden brown, around 5-6 minutes per side. Use tongs to turn them. They should be charred in places.

5. Transfer to a platter and scatter with parsley and sliced red onion. Squeeze with fresh lime. Serve with warm laffa bread and hummus.

Be the first to comment on "Shwarma chicken kebabs: Perfectly spiced, quick to make and oh-so-juicy"