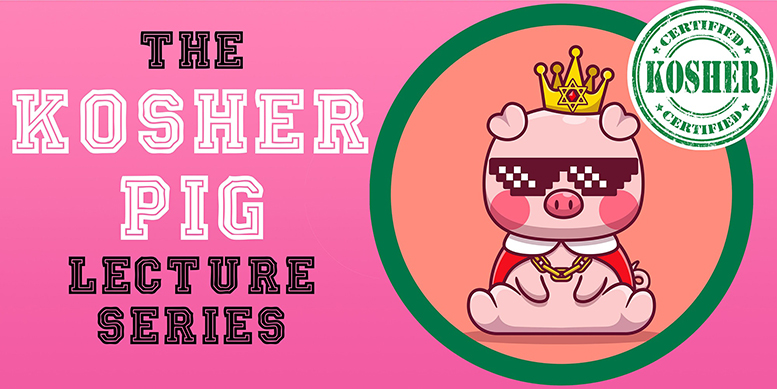 In August and September, Rabbi Matthew Ponak will be giving 4 online talks called "The Kosher Pig Lecture Series." Tickets are available at eventbrite.ca.

(AJNews) – Many Jews today carry guilt for not being more “religious.” Many of us, consciously or unconsciously, hold up ritually observant life as the ideal way of being Jewish, believing that “Judaism has always been this way.” This is, in fact, a myth. Our sense of secular shame is caused by a misunderstanding of our history. There is another way!

After being raised in the Alberta Jewish Community, studying religion academically, and becoming a rabbi, I have discovered that Judaism has always been fluid. Some examples: (1) Ancient Israel had a pantheon of deities including a Goddess named Ashera. (2) The original food prohibitions likely forbade certain animals but mixing milk with meat was allowed. (3) Our holidays change over time. Did you know Rosh Hashanah does not appear in the Torah?

As you can see, not observing Shabbat or marrying who we choose is just another phase of Jewish evolution.

In August and September, I will be giving four online talks called The Kosher Pig Lecture Series. These will be aimed at helping non-religious Jews feel prouder of how we choose to live our lives. Through many examples, I will show that the Jewish religion is—and always has been— a balance between tradition and innovation. Our ancestors continuously made choices about how they wanted to live, in some cases completely disregarding or heavily minimizing religious customs they inherited. We are doing the same today, as part of a long line of Jewish change-makers.

In fact, if it were not for Jews who think and act independently, our culture could have done much worse at adapting over time. Dissenters are an essential part of what drives the Jewish culture forward. We fuel the diversity necessary for surviving and thriving.

Each of these lectures happens on a Thursday from 7-8:30 pm MST. They will also be recorded. On August 12, the first Kosher Pig is pseudoPIGraphy, an ancient tool of making new ideas sound old. This technique is the reason we think that “the tradition” is so ancient and unchanging: novel ideas are woven into it over time.

August 19 is about The Bar Mitzvah Industry. Most of us grew up thinking that chanting the Torah in front of the congregation is a tradition as old as Judaism itself. In fact, the Bar Mitzvah Ceremony as we know it today (not to mention the Bat Mitzvah) is a product of the modern era.

August 26 will focus on intermarriage and how it was an accepted part of early biblical society. You may recall that Moses himself was intermarried!

Lastly, on September 2 we will explore spiritual innovation today. Our greatest, most well-known ancestors were all rebellious in one way or another. With the ever-changing nature of Jewish culture in mind, what can we create in our era as a gift to future generations?

Rabbi Matthew Ponak is a Calgary-born Jew and co-founder of Mekorah – an online spiritual innovation platform that offers classes, one-on-one guidance, and refreshing new perspectives on religion and spirituality.

Be the first to comment on "Rabbi Matthew Ponak asks: Can a pig be kosher?"