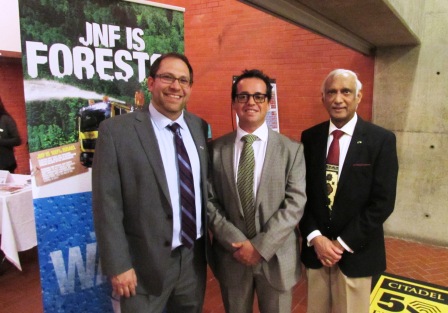 January 27 marked the International Day of Commemoration in Memory of Victims of the Holocaust. This year’s memorial events were particularly poignant as they also marked the 70th anniversary of the liberation of the Auschwitz-Birkenau concentration camp. Around the world, special events commemorated the 6 million victims who perished; they also celebrated the survivors and lauded the bystanders who saved Jewish lives.

Locally, the Edmonton Branch of Jewish National Fund (JNF) and the Portuguese Consulate jointly hosted an evening event that celebrated the courageous activities in 1940 of Aristides de Sousa Mendes, Portugal’s consul-general in Bordeaux. Sousa Mendes bravely defied orders of his superiors by providing travel visas and safe passage to 30,000 refugees, including 10,000 Jews, as well as countless Russians and stateless persons who could not return freely to their countries of origin.
The evening event, held at Ziegler Theatre, featured the Edmonton premiere screening of “O Consul de Bourdeus,” a Portuguese film with English subtitles that dramatizes the true story of Sousa Mendes’ heroism during World War II. The film follows the story of Sousa’s selfless bravery. In the film, Sousa Mendes explains his actions by saying, “We must never confuse neutrality with indifference.”

In real life, following the war Sousa Mendes was severely punished by his government and stripped of his diplomatic titles and the ability to earn a living. He died a pauper in 1954 and it was his dying wish that his name be cleared.
The first recognition came in 1966 from Israel, which declared Aristides de Sousa Mendes to be a “Righteous Among the Nations.” In 1986, the United States Congress issued a proclamation honoring his heroic act. Later he was finally recognized by Portugal, when its President Mario Soares apologized to the Sousa Mendes family and the Portuguese Parliament promoted him posthumously to the rank of Ambassador.

The film was introduced by Aurelio Fernandes, Consul Honorario for The Portugal Consulate in Edmonton. He gave special thanks to JNF, Witten LLP and City Lumber for co-sponsoring the event. Following the screening Fernandes said that many people approached him in and said it was their first time hearing the diplomat’s story.

“They said it was heartwarming how one man made such a difference and saved so many lives by having the moral courage to stand by his beliefs,” said Fernandes.

JNF Edmonton, Executive Director Jay Cairns said, “It was a pleasure for the Jewish National Fund to present this important film O Consul de Bordeaux in partnership with the Portuguese Consulate in Edmonton. It is very special when two communities that have had little to no contact with each other previously can come together to commemorate the 70th Anniversary of the Liberation of Auschwitz/Birkenau and celebrate the difference one individual can make when a person stands up for what is right, when we as a global community choose life.”

Rabbi Daniel Friedman also spoke at the event and made reference to the hooligans that recently vandalized the Beth Israel Synagogue in West Edmonton with racist graffiti He noted that the same hooligans had defaced a Sikh temple in the city a few weeks earlier. He said, “We as a Jewish community failed by not issuing a public condemnation when the Sikh temple was defaced. We were wrong to look the other way.”

“We take our hats off to the Portugal consulate for holding this event and taking a strong moral stand today.”

“Since that fateful day in January of 1945, the word Auschwitz has come to symbolize one of the darkest chapters of human history, a sad example of man’s inhumanity to man. We are thus compelled to remember the innocent victims of these crimes and lives that were ended, many before they truly began. We are obligated to never forget the past — lest we find ourselves repeating it.”

“However, sometimes, the more things change, the more they stay the same. The old hatreds have not been buried, and old injustices have simply been replaced by new ones.

“Most disturbingly, Jews are once again being murdered simply for being Jewish. We saw it in Jerusalem where four Rabbis and one Druze Policeman were butchered. We saw it in Paris where the Jewish community is once again under siege. We cannot allow this virus to spread any further.”

“Now, it has often been said, that the only thing required for evil to triumph is for good people to do nothing. This is why I would like to thank those of you who have paused today, even for one moment, to reflect on the lessons of the Holocaust. For it is only when good people speak out that we have any chance in combating this growing threat.”