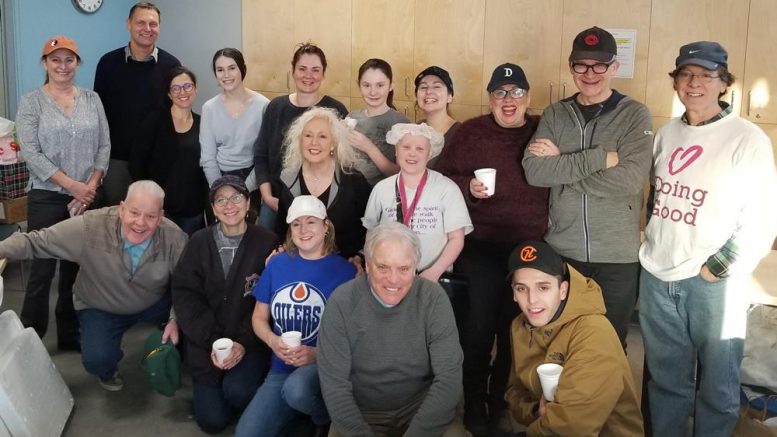 Members of Edmonton's Jewish Community once again volunteered with the Inner City Pastoral Ministry to prepare and serve a pre-Christmas lunch at the Bissell Centre.

(AJNews) –  The Inner City Pastoral Ministry (ICPM) is an ecumenical Christian organization serving the people of Edmonton’s inner city. It began in 1978 and is now jointly sponsored by four denominations: United, Roman Catholic, Anglican and Lutheran. A Sunday morning worship service is held in the Bissell West building, followed by lunch served to anyone who wishes to come in for a meal; they do not have to attend the service. We refer to it as the Bissell lunch for simplicity. Different churches take turns through the year, supplying the food and servers.

In the mid 1990’s we found out that the Sunday before Christmas was the most difficult to find a church to volunteer, and the Jewish community stepped up. Barbara Bushewsky was the initiator as I recall. For the first few years we made the sandwiches at Beth Shalom, 300 each of meat, egg and tuna, plus baking, desserts, cutting up fruit and vegetables, and more. It was a huge effort to organize, necessitating a large number of volunteers on Saturday night and/or Sunday morning. We needed someone who knew quantities, Dasha Goody (z’l) and Josie Peters both helped with this. And being in the shul of course all ingredients had to be kosher, increasing the amount of money that had to be raised. We couldn’t even save time by bringing in eggs hard-boiled at home. It was wasteful to spend hundreds of dollars more to serve kosher food to non-Jews.

After a few years we developed the model still in use: up to 45 people make 2 (or often more) loaves of sandwiches at home and deliver to one of two drop off points, and baking as well. Ready to serve fruit and vegetables are bought.  Eighteen people arrive at 9 a.m. at Bissell West to prepare and serve. The picture shows our wonderful volunteers, with Anglican Pastor Rick Chapman in the front row, second from the right. ICPM is his full time ministry.

Everyone who takes part in this mitzvah finds it very meaningful, it is a hands-on, face-to-face experience, a rare opportunity to meet some of our less fortunate neighbours. Teens in particular find it eye opening. Participants often asked if we couldn’t do this more than once a year and were told to go ahead. Nikki Hayden and her kids helped many times, and about 8 years ago she began the Thanksgiving Sunday Bissell lunch, with mostly Beth Israel participants, but for both lunches there have always been volunteers from the entire Jewish community.

Please watch for the notices next year if you would like to be involved.