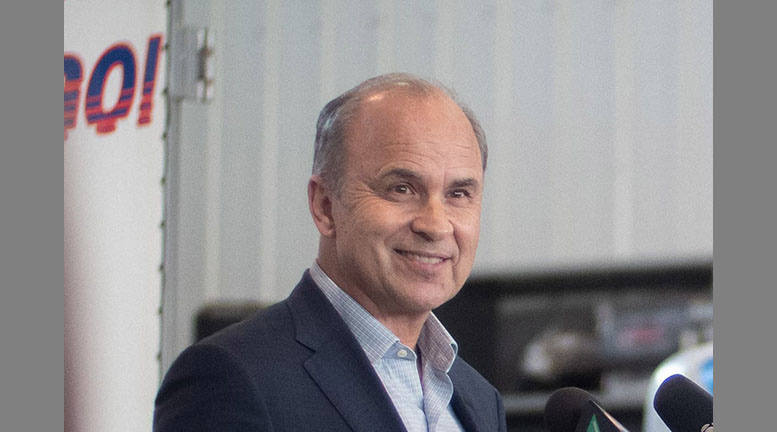 (AJNews) – Rick Peterson is running for the nomination to be the federal Conservative candidate for Edmonton-Strathcona, the sole Alberta riding not represented by a Tory.

Peterson, who was a Progressive Conservative prior to the party’s merger with Reform, says the riding, with its diversity and amount of government employees is a bellwether of sorts for the party’s fortunes across the country.

“The really fascinating thing about this riding is for the Conservative party, if we can win a riding like Edmonton-Strathcona, that means that we’re ready to win ridings like that in urban Canada that will lead us to a majority,” he said.

Peterson says he wants to learn from the Jewish community, touting his admiration for Israel’s tech sector.

“As an MP, the first thing I’d like to do … is go to Israel and meet everyone who’s involved in technology, research and IP development, because nobody does it better,” he said. “I’d like to steal a couple of your thought leaders and bring them to Edmonton-Strathcona, and set them down in one of the empty buildings on Whyte Avenue, and say, ‘Hey, let’s build this startup.’”

Incumbent NDP MP Heather McPherson sits on the Canada-Israel Interparliamentary Group; she’s been critical of Israel’s proposed unilateral annexation of the West Bank, which has since been put on hold. She is also a strong advocate on issues relating to poverty reduction, gender equality, environmental protection and human rights.

“The federal NDP’s views on Israel … are, I’ll be polite and say, nuanced at the most,” said Peterson.

“It’s one thing to sit on a committee, but you’ve got to stand up and say the right thing whenever it’s necessary to, and the NDP is conspicuously silent at times when they need to stand up for Israel.”

The Conservative Party’s official policy of moving the Canadian embassy in Israel to Jerusalem from Tel Aviv, as the U.S. and several other states have done, has overwhelming support within the party, he added.

Canada’s foreign ministry has never recognized Israel’s unilateral annexation of East Jerusalem in 1980. However, former prime minister Joe Clark vowed in 1979 to move Canada’s embassy to Jerusalem, but backtracked once he formed his short-lived government.

Asked whether he supports a two-state solution to the Israeli-Palestinian conflict, Peterson paused briefly.

“I support a two-state solution when the Palestinians have the right to have a voice that is a clear democratic vote for who they’d like for leadership, which isn’t the case right now,” he said.

He says while he’s never heard of Fromm, Sloan’s expulsion was a long time coming, due to the last-place leadership candidate’s support for conversion therapy and his smearing of Dr. Teresa Tam, who was born in Hong Kong, as an agent of the Chinese government.

“I don’t think any party can be 100 percent foolproof to somebody you don’t want making a donation. The clear question is when you find out about it, you have to rectify it,” said Peterson. “When caucus votes you out, you’re off the island. It’s as simple as that.”